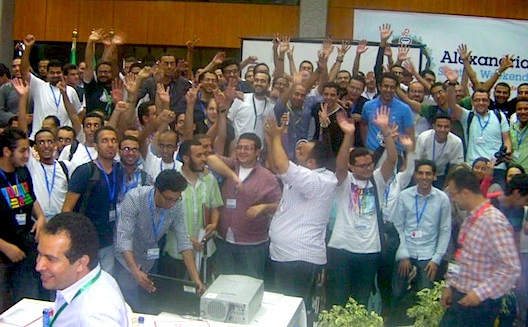 Egypt’s second Startup Weekend kicked off this past weekend in Alexandria, Egypt’s second-largest city. Following the Cairo event earlier this year in April, Startup Weekend Alexandria seemed determined to outdo their counterparts in the capital. Thanks to funding from the Arab Academy for Science, Technology, and Maritime Transport (AASTMT) and the U.S. Agency for International Development (USAID), Startup Weekend Alexandria hosted a crowd of over 300. Hopeful entrepreneurs flocked to the event from all over, including the S3Geeks all the way from Upper Egypt, to dedicate themselves to building new businesses in Egypt. Indeed, the opening speakers all stressed Startup Weekend Alex’s critical role in contributing to Egypt’s entrepreneurial ecosystem. Ziad Aly, serial entrepreneur and CEO of ZMS, emphasized that the new wave of Egyptian entrepreneurs weren’t important only to their teams, but that they would spread the revolution to all sectors of Egypt.

The event proper began with the pitches, in which participants pitched their ideas and their vision of an ideal team in under 60 seconds. Although participants had been given advice on the best ways to pitch, many proceeded to mumble or fumble. Yet this was all part of the fun of the first night; it was a valuable initiation experience for many. One marked difference between this event and Cairo’s was that the average age of participants was younger, and there were many teenagers. There were also more female pitchers, and more green ideas all good signs that the scene is progressing.

A general consensus, however, among the veterans of Egypt’s entrepreneurial scene, was that there weren’t enough compelling new ideas. And a consensus among those pitching was that there weren’t enough designers- a complaint that echoed the case at Startup Weekend Cairo. This didn’t stop the excitement though- over 250 ideas were pitched and over 30 teams formed that first night. Wamda’s own Habib Haddad encouraged the fledgling entrepreneurs to take a long-term view, stressing that they should come away from the event having built good connections with people, as “ideas might not survive, but connections will.”

The second day marked a shift in atmosphere.  Participants hunkered down, some having slept at the venue, and proceeded to brainstorm with a building intensity. Everyone there wanted to get the most from the experience, even if they weren’t part of a team.  Muhammed Ottman, one of the many teenagers present, had been involved in a car accident on the way to the event that had ruined his laptop and his chance of pitching. “I was shaken and nearly went back home, but l decided to attend anyway, just so I could experience the atmosphere and learn for the future,” he said.  Sara Galal, who’d pitched the idea for Sweety Heaven, a site where kids could earn gifts by fulfilling chores, explained the social focus of her website, noting that it would “allow children to choose their gifts, which is a cultural change because kids don’t normally get to choose here.” She added, “I’m not here to win. There’s no pressure- it’s all about having fun.”

The undercurrent of cultural change, a constant in Egypt these days, emerged even more on the final day of the event, which boasted an intensity not present in Cairo. The main workroom incessantly buzzed, despite the fact that many teams had worked through the night.  Some ignored the great meals being offered, and yet their overall serious focus gave birth to some very fun ideas, including two gaming projects Kora Sharab, an online text-based football management game with a distinct Egyptian flavour, and the very impressive 1001 Inventions, a 3D educational game based on Arab inventions during the Middle Ages.

After the final pitches- 36 in total- five winners were selected. In fifth came S.L.O.W., an augmented reality app, in fourth came loyalty program app QHat, third was awarded to AsTweeted, a Twitter archiver and analyzer, and YouPik, a custom picture and frame ordering app, landed as the runner-up.  In first place, as in Cairo, the team with the biggest audience cheer won Sweet Heaven.  Although many initially thought the idea pool was weak, by the end most echoed the sentiments of USAID’s Mike Ducker as he unequivocally proclaimed, “Startup Weekend Alex, you guys outdid Cairo.”  Whether or not the winners go on to create successful enterprises, the participants at Startup Weekend Alexandria proved that they have the energy to build the Egyptian entrepreneurial ecosystem from the ground up.