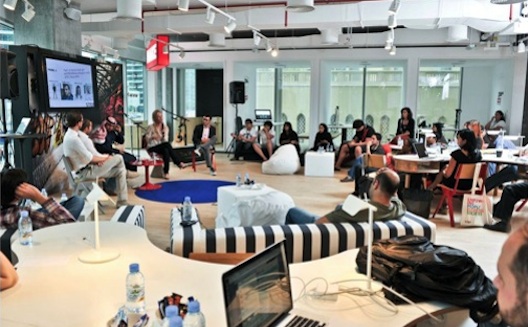 On Friday April 6th artists, entrepreneurs, and investors gathered for the STEP Mini-Conference, a forum for ideas and inspiration resembling a TED conference.  Held at new Dubai business hub MAKE, a series of presentations, panels and performances explored what it means to be an entrepreneur, and how we can harness our collective creativity.

With three full sessions and two panel discussions, the half-day event was packed. Highlights included Virgin Radio’s top presenter Kris Fade, an Australian of Lebanese origin, who talked about bringing his unique talent to Dubai and custom-fitting it within guidelines. Not allowed to discuss many topics that his compatriots in Australia rely on to get laughs, Kris has made a name for himself by doing elaborate stunts like specially–designed interview games where no one is allowed to say a common word like ‘yes’ or ‘no’, doing a 28-hour broadcast, and pulling a car with his long braided hair (ouch!)

Peter Saghegyi of Sentiomedia satired local business culture, looking at common behaviors and highlighting when they’re clever and when they’re not. For instance, the ‘No Problem, Sir’ phenomenon, in which everyone agrees to do everything, can be a clever way of getting business in the face of uncertainty, but can lead to major problems later on. A similar phenomenon is the ‘I Don’t Care Bed’ when people refuse to engage or do their jobs properly. But if unqualified people end up in the wrong jobs, lives can be endangered. Sagheyi offered the example of lifeguards in Dubai. An uncomfortably high percentage of them cannot actually swim, and it turns out that it’s much cheaper to hire a security guard than a lifeguard, so that’s what ends up happening; a good example of the pitfalls of both phenonmena.

American University of Dubai Professor Maria Garcia talked about the intersection of social, global, and participative elements in social media, emphasizing that a small, seemingly unimportant online interaction in one part of the world can trigger, quite literally, a revolution. A marketing professor and a former journalist, Professor Garcia was attracted to Dubai because of its nearness to the change happening throughout the region. Professor Garcia also stressed the importance of companies, whether big brands or startups, having a policy of transparency when it comes to customer complaints, rather than attemping to silence them. In a debate after her session, she weighed in on cases in which a company’s tagline is used for unrelated parodies or satires, stressing that the brand message gets carried on even if people are deliberately misusing it.

The first panel discussion was moderated by STEP founder Ray Ragheed, and included founders such as Rony El Nashar of SeedStartup, Saleh Al Braik of ThinkUP, HR consultant Linda Jarnhamn, and Leith Matthews of MAKE. Each panelist talked about his or her motivations for starting their venture. Saleh Al Braik managed to get to 35,000 Twitter followers and was followed by several dignitaries during the Arab Spring. Leveraging his celebrity to do good, he founded ThinkUP to highlight local heroes and youth doing remarkable things.  Rony El Nashar prompted a good debate on the value of an early-stage company with his perspective that “there is no market” for ideas. As an investor, he said, he looks for capable teams who can execute, not just good ideas.

The second panel was moderated by digital strategist Alexandra Tohme, and included Novel Tjahyadi of SMS-polling company Textello, Maria Rousan of Black Iris Publishing, Theresa Tsui of SolidariTEA Arabia and myself (a ‘Fairy Godmother’ who helps startups grow). We discussed the challenges of being an entrepreneur in Dubai, and how persistence is critical. Maria Rousan of Black Iris Publishing told a story of how sometimes it’s necessary to do weekly phone calls and unannounced visits to get the simplest thing done. Using the conference as a resource, we also put questions to the audience like, ‘where can I find a good intern? (Gradberry.com) and ‘what payment application can I use for my website? (2Checkout.com).

The breaks were kept lively with an audience vote on key topics using new audience-polling service Textello, and a musical performance by Tim Hassall, who transformed himself from a one-man show into an apparent full band using a technique of recording and playing back chords in a layered format.

Congratulations to STEP for creating great energy around entrepreneurship and providing a forum to connect and explore creativity and innovation. Let’s keep the momentum going.