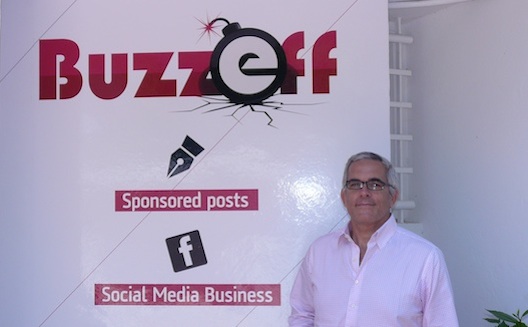 In the Moroccan digital space today, startup Buzzeff is becoming a strong and influential player with a fresh approach to advertising. After launching over a year and a half ago, the social video advertising company recently made headlines by raising US $1.2 million from Solorun, a private equity investor in Luxembourg, and a roundtable of successful and experienced European serial web entrepreneurs, including Marc Menasé, Said Saad and Emmanuel Francoise.

It’s no fluke- the success of Buzzeff, which phonetically references both “buzz” and the Moroccan word « bzaaf (بزاف), meaning “too much”, is clearly driven by the innovative thinking and the sharpened entrepreneurial spirit of Buzzeff’s founder and CEO, serial web entrepreneur Jérôme Mouthon. At 40, Mouthon has created and managed several successful IT and web companies in France and Morocco, beginning with the launch of his first startup France in 1993 at age of 21. After selling that company 7 years later, he moved to Morocco in 2002 and built Sysnek, one of the first web agencies in Morocco. He then launched Cerdis and Saisie, both specialized in Business Process Outsourcing (BPO) and telemarketing services for southern Europe customers. The three companies later merged to become Finashore (part of Finatech Group), of which Jérôme was CEO until early 2010 when he decided to build a new web agency Numeri Web and co-found Buzzeff.

Given that web usage today is dominated by consumption of images, music and videos, Buzzeff has chosen to focus its activity on video advertising, making it the center of their digital communication strategy. Essentially, Buzzeff develop channels for advertisers to broadcast their videos (e.g., TV ads) on social networks and expose their content to the widest potential audience while targeting specific segments and encouraging sharing. Impact measuring tools are used to control the delivery and performance of each social video advertising campaign, with Buzzeff offering sponsored posts, gamification and community management to complement the initial release.

Thanks to its strong partnership and link with Ebuzzing, a European leader in social media video advertising, of which Buzzeff is the MENA representative, the Moroccan startup has quickly attracted many local advertizers.

“In less than 18 months, more than 60 advertisers have beneficiated from our expertise in social video advertising,” says Mouthon. “We publish branded video content on the primary social media vehicles, mainly Facebook and Twitter. The technology and expertise of Ebuzzing as well as our strong networks of publishers allow us to reach an influential and engaged audience.

Indeed, Buzzeff has broadcast videos to over boasts over 4 million page views per month, while offering a potential of 20 million page views per month over its network of around 10,000 blogs across MENA. With 35 employees and revenue growth of 200% in the first six months of 2012 compared to the same time period in 2011, “it’s time for us now to grow in the MENA region,” says Mouthon.

The fundraising will allow Buzzeff to expand the MENA region by setting up a new entity in Dubai called Buzzeff Middle East, while also strengthening its presence in Maghreb by recruiting dedicated salespeople in Algeria and Tunisia. “We’re planning to exhibit at the Med-IT conference in Algiers end of September, which will allow us to have a direct contact with the Algerian advertisers.” Mouthon explains.

A great enthusiasm permeates the Buzzeff team, despite the startup’s recent disappointment that Maroc Numeric Fund refused to participate in their round of fundraising. "Our decision to accelerate our international development naturally led us to contact the MNF, motivated by the desire to raise funds locally to promote Morocco in the international. But, nevermind,” says Mouthon.

The fact that the company is succeeding anyway does not surprise me; ever since I met Jerome 5 years ago at Finashore, I’ve been impressed by his simplicity and generosity. He’s down to earth, understands the entrepreneurial realities of Morocco and France, and has succeeded in developing strong relationships of mutual trust with potential collaborators across the years, who can become extremely important when it comes to launching a new startup like Buzzeff. These strong synergies will certainly lead to the emergence of a powerful digital leader in the region.

Watch my interview with Jerome below: