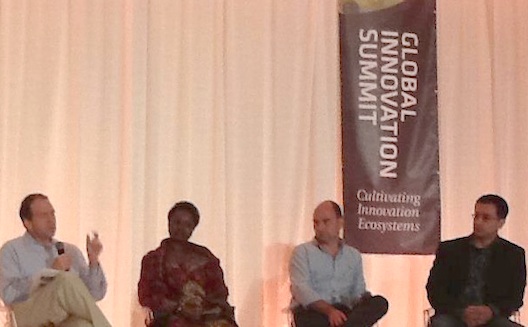 To build an innovation ecosystem out of nothing, it’s commonly believed there’s an unwritten recipe which goes something like this: first take a large university engineering department, mix in 1 part venture capital and 1 part government funding, stir, and shape into an incubator.  Layer a handful of startups on top, and bake for 3 months, liberally applying media coverage at regular intervals. At the end of 3 months, remove from incubator, and repeat with a new batch. After a year, a brand new Silicon Valley is ready.

Believe it or not, it’s more complicated than that.

But just how complicated? Countries around the world want to know what it takes to build an innovation ecosystem, and in July, the Global Innovation Summit (GIS) in Silicon Valley offered an answer. Drawing speakers from the worlds of development, innovation, design, and investment, the conference was well-attended with 400 attendees from 49 countries. Conference organizers Al Watkins, Victor Hwang and Greg Horowitt have a long history in innovation investment and economic development, and even published a book on the topic this year (“The Rainforest: The Secret to Building the Next Silicon Valley”, Hwang and Horowitt, 2012).

The goal was to focus on pragmatic actions, not just discussion, says Hwang, who is also a venture capitalist. “In the beginning, we saw a deep need for a major event on how to build innovation ecosystems, focused on pragmatic doers, not just talkers, from around the world. We realized that by combining the worlds of policy and practice, we could create a special event, unlike any other.”

You might think that it’s strange for a conference on economic development to take place in Silicon Valley, but that was precisely the point: everyone wants the secret recipe to replicating Silicon Valley in other countries. Organizations from governments to philanthropists increasingly see innovation as a way forward to build new markets, rebuild countries after conflict, and leverage a global pool of talent. Billions of dollars are pouring into innovational programs around the world, and the stories of Maktoob and Wamda are demonstrating the possibilities in this kind of investment. With nearly two dozen sessions and more than 50 speakers, attendees came away from the event with real solutions and best practices on the requirements for a viable, sustainable innovation ecosystem.

The event opened with an overview of venture capital investing and revealed a startling fact: with returns of just 2% over the long term, venture capital investing has historically not been profitable. Given this controversial statistic, there’s never been a better time for the industry to explore new models of investing, new ways of developing entrepreneurs, and new ways of calculating returns. A panel on the future of seed capital recommended the focus should be on making better, not more, investments. And the newest and most exciting addition to investment models, crowdfunding, just became legal in the U.S. and is present in many countries, including the Middle East.

The MENA region was a major feature at the conference, with speakers like Egyptian investor Ossama Hassanein of TechWadi and Newbury Ventures and Jordanian entrepreneur Nour Khrais of Maysalward. Jordan’s Oasis500 was highlighted as a successful way to generate viable companies by leveraging the power of mentors, and two of the top five finalists for the ecosystem solution pitching competition were Egyptian teams working in agriculture technology and city development.

A session on venture and product design was especially inspiring, as panelists in design, academia, and urban development gave unusual tips such as involving customers in the design from the first step, building teams based on psychology, and building integrated incubators where entrepreneurs form just one part of the resident community.

There was even a special screening of the documentary film Something Ventured (see the trailer below), which traced the history of venture capital in Silicon Valley and included the first investors of giant tech firms like Apple. The earliest investments came from tight networks of friends, investing in brand-new companies with brand-new ideas. Decades before the era of $1 billion acquisitions, the earliest venture capitalists loved innovation and being a part of something worthy.

So what’s the secret recipe for building a new Silicon Valley? It turns out that there is none. All the key ingredients can be there - universities, governments, NGOs, incubators and startups - but it’s nothing compared to a committed group of people with a high degree of trust, collaboration, sharing, and interdependency.