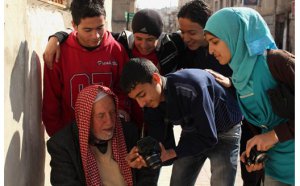 While entrepreneurship is one tool for helping young people in Jordan find new opportunities, empowering a generation can begin with simple encouragement of leadership.

For Rawan Da'as, facing local realities in Jordan and working to change them is a daily creative process.

After graduating from the University of Jordan, she began expressing her passion for photography by documenting areas of Amman, eventually winning the Arab Participant prize for a photo she took of three kids playing with stones in a refugee camp in Jordan called Gaza camp – located in Jerash, a city near Amman.

Yet being a photographer wasn't enough; it felt exploitative. "It is not right to visit these areas, win prizes from their misery and just leave," says Da'as.

To counter her frustration, she launched "Photographic Skills for Little Wonders," a project designed to improve leadership, team work, project managment, creativity and critical thinking, through photography, among children living in deprived areas.

The hope is that by teaching them skills that would help them lead and find jobs despite the fact that they come from one of the poorest regions in the country.

She couldn't do it alone, however. To get started, Da'as prepared a proposal for her project and pitched it to Ruwwad, a non-profit community empowerment organization that helps disadvantaged communities overcome marginalization. Once her proposal was accepted, Ruwwad agreed to support the initiative by providing cameras for the children, a place to meet and two volunteers.

Over six months, Da'as began dedicating her Saturdays to a group of six children from Jabal Al-Natheef. She would meet with them first, share her experience about the importance of volunteering and contributing to your community, and give them training on how to become good leaders, teaching them about finance, how to be an active team member, and how to think creatively and critically. After the meeting, the group would walk in the streets, take pictures and interact with the community.

A crucial part of the project is assigning small tasks to each member, like managing the production of a short movie, calculating its financial needs, or being responsible for the cast and the team. At the end of the project, 80 pictures were exhibited at Ruwwad day, on June 16th 2012, all from Jabal Al-Natheef, and a movie was produced and shared on Youtube.

Da'as has continued to push a narrative of social change and empowerment through the arts, as a member of the AMENDS delegate at Stanford University (American Middle Eastern Network for Dialogue) and the Jordanian Photographic Society, and a participant in the Karama Film Festival, a festival focused on human rights.

She's been rewarded for her efforts, not just with the Arab Participant Prize, but also by winning second prize at the 8th International Photography Festival of Jordan. Yet the accolades haven't slowed her commitment to her work. Her day job as a content affairs manager focuses on business advice, complementing her social work, she says. "My work is far from my interests, but allows me to develop many important skills to train the young volunteers."

Now, she's taking the project on the road, hoping to launch the project again in other regions, especially outside Amman, once she can secure funding.

The project is designed to last six months, consisting of weekly meetings and short trips with groups of 6-8 students to photograph surrounding areas, culminating in an exposition of their photos.

While Jordan has volunteerism organizations like Nakhweh working to make a difference, it's clear that there's plenty to do at very basic levels. "The Jordanian community needs volunteering, commitment and hard work. It s very sad for me to see young Jordanians drowning in their daily jobs and not doing anything else for their societies", Da'as says on a sad final note.