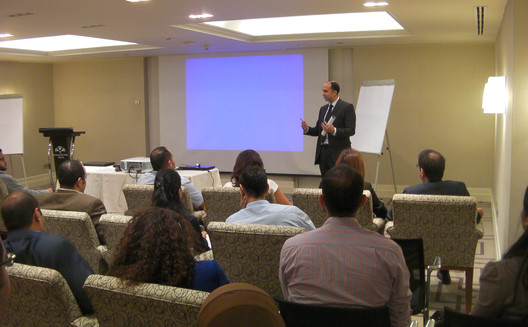 The Cairo Angels (CA) business angel group has been going for about a year now, and I was happy to attend their latest regular pitch session to see how things work behind the scenes. Everyone in attendance agreed not to divulge any details relating to the pitches, so I will of course respect that agreement while transmitting the lessons learnt.

These pitch sessions are held quarterly in the plush Kempinski hotel by the Nile, and are invitation only. Startups apply to Cairo Angels and those that are deemed to be reasonable investment opportunities are invited to pitch. The group is willing to hold an ad-hoc pitch session if a time-sensitive investment opportunity presents itself, as happened recently for a mobile-app based startup, but normally around 6 teams pitch, with about ten investors present.

My first impressions of the Cairo Angels session is that it differed markedly in atmosphere from the pitching sessions we’ve gotten used to at startup events in Egypt.  The energy level was subdued, but the whole gathering felt more serious, professional and high class.  It was still however a very relaxed affair, mainly due to the manner in which Hossam Allam, Cairo Angels founder and Master of Ceremonies (MC), controlled proceedings from the front.  He kept proceedings flowing and injected enough wit to keep the night from becoming too formal; in fact I think in a parallel universe Hossam has a very successful career as an after-dinner speaker!

The night itself was split into two halves. First, half of the teams pitched, followed by a guest speaker and a dinner break. Then the remaining teams pitched, and finally, investors debated in a closed panel which teams, they wanted to start negotiations with. The food on offer throughout was great, so well done, Cairo Angels, for getting quality event food from an Egyptian five-star hotel.

Back to the pitching, half the teams at this session were incubator graduates, and the other half had already been operating for roughly a year, and this extra experience showed in the better-than-average pitches and investments requests of on average EGP 1 million (US $167,000).

It also demonstrated that the Cairo Angels were shifting away from the traditional business angel territory of seed-stage funding to also cover second round investments.  This is in part due to the quality of the teams available at present, and also the nature of the investors available. Hossam disclosed to me that some potential investors had been asked to leave the group as they were just attending for the prestige and weren’t seriously committed to investing. I believe this is a necessary and welcome step, after all we always tell start-ups to be serious, so it’s only right that investors are as well.

The most interesting and important part of the night for me was the closed investor discussion at the end of the night.  One team hadn’t defined its unique selling point (USP) enough, so the marketing message was too broad and the business plan too vague, so no investors were interested at all. The other teams were all hi-tech based, and even though half of the investors didn’t understand the technology behind the business, the teams all got at least one investor interested. One common complaint was that the teams hadn’t thought through their business strategy enough, and this showed in the unrealistic financial projections.

Entrepreneurs are always told, and should remember again now, investors are primarily interested in the numbers. Know your numbers, and know why and how you’ve come up with the numbers, this shows the investor that there’s good research, and also tells them how much money they could make from the deal, and that’s after all the main target of the investor, to make a good return.

Saying all of that, even though some of the numbers weren’t reasonable or realistic, these remaining teams themselves impressed the investors, and the decision to open negotiations reinforces the fact that investors invest in people more than ideas.  The Cairo Angels investors believed in those teams more than they believed in the respective business strategies.  This all shows CA is fast approaching the advanced level of Western angel groups.

Egypt has many wealthy people who just need a serious framework and a good reason to invest.  With CA starting to hit its stride, this sets a good example to the whole Egyptian entrepreneurial ecosystem.