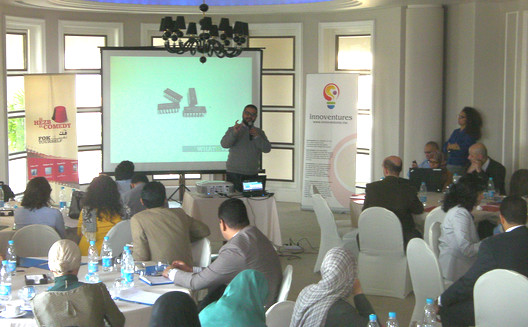 The Innoventures’ Startup Reactor (SR) accelerator launched recently, with a pitching session at the luxury Kempinski hotel by the Nile. Over a dozen teams covering various sectors pitched their businesses and ideas to the gathered investors for a chance to be part of Startup Reactor’s inaugural incubation cycle.

The Startup Reactor (SR) model of incubation differs from others in the region in that their development cycle is six months long, instead of the now standard three months, and although they provide training and mentors as other do, SR mentors also receive a small amount of equity in the business they mentor, to create extra incentive for both parties. The last difference is that Startup Reactor is starting without its own fund, so it essentially acts as a middle man in terms of getting the seed investment.

That made this initial pitch session critical, as the teams pitching had already impressed SR, but now they had to impress at least one of the gathered investors to part with their money.

How good were the pitches?

I’ll start with the bad points. On the whole, the pitches were above average, with only Splinter standing out by being engaging and honest. One of the teams was already in business but faltered on a simple question from Ziad Aly of AlZwad about their cash flow figures the previous month. They didn’t know the numbers. This was a basic error, but instead of admitting the mistake the team’s CEO got argumentative about not needing to know the numbers. I can’t stress enough to founders out there, know your numbers, especially when you’re talking to investors.

A few of the other teams were also defensive when questioned by prospective investors. It’s imperative teams don’t think of these questions as attacks but opportunities, as investors’ questions frequently tell a team what’s missing in their presentation, or (more importantly) in the investor’s understanding of the presentation.

On the positive side, the teams that SR chose all had solid business ideas, covering many sectors that other incubators have chosen to ignore, such as the health sector, with the real dark horse being the VLSI Reactor (VR), a startup accelerator that will focus on the semiconductor industry, and will serve as a sister incubator to SR.

VLSI stands for Very Large Scale Integration, and VR’s sole focus is semi-conductor chip design (manufacturing will most likely be carried out in China, as Egypt doesn’t have the facilities). Mohammad Omara, founder of Fascila Technologies (which is also a partner in Startup Reactor) is heading up VR.

It’s exciting to think Egypt can build on the successes of SysDSoft and others to develop this sector locally. None of the teams in VR pitched during this session as VR hasn’t launched yet, but VR has partnered with leading software and service suppliers abroad to make chip design completely affordable for local startups. So watch this space.

Overall it was a good event, and many of the teams showed promise.  Although this marked the inaugural pitch event, the actual planned launch of Startup Reactor’s first cycle has been delayed to Jan 2013 due to the current political situation, so it’s only then that we’ll know which teams were able to get seed funding.

In the meantime, it’s good to see a different incubation model emerge in Egypt, as positive disruption and increased competition can only be good for the ecosystem.