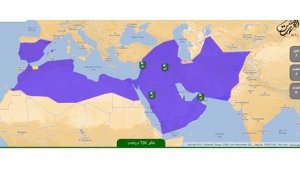 Imagine a time machine that takes you back in time to visit Baghdad in the Abbassid Era, when you could roam its streets, experience its ambiance and get to know the Islamic renaissance period, rich with scientific inquiry.

This is what Al Fehrest is aiming to do, by indexing events in Islamic history and relaying the evolution of the region's civilization via an interactive map.

Al Fehrest brings back to life an era that witnessed the early rise of applied sciences over some 800 years, between 700 and 1500 A.D., a period full of both scientific events and Caliphs that have left their trace in the history of the Islamic civilization.

To do so, the website's map reveals the Muslim world's geographical and intellectual evolution, displaying how its borders shrank and expanded throughout history, and how regions became divided by events and scientists.

The central idea, says founder Dr. Moustapha Mohammad, an assistant professor at Al-Azhar University, is to situate events within their context. “The idea behind the map is to build a platform that presents data and events in a way that is not disconnected from their societal context, rendering the interpretation of any event more rational and allowing students to grasp the meaning of an event more deeply.”

Earlier this month, Mohammad, who is focused on using new multimedia tools for teaching, spoke about Al Fehrest and the modern documentation of history at TEDxCairo. He is currently working on registering the project as a non-profit organization in order to continue funding its growth.

Origin of the Idea

The inspiration for Al Fehrest came from a computer game, in which Mohammad discovered that Da Vinci and Machiavelli had both lived at the same period and the same city in the late 15th century. “Why can’t we have a source of information that tells us which scientists lived next to one another?” he remembered thinking. With this idea in mind, he began collecting information on the birth and death of scientists in an Excel sheet, which he later developed into a graph including their city of residence, ultimately embedding this data into the current map.

It is worth noting that Mohammad’s main partner, Anas Chaaban, is a researcher specialized in telecommunication engineering at a university in Germany, whom he met over the internet without ever meeting in person. It's a project that awakens the passion of historians; volunteers and consultants majoring in history are also offering their time to the project.

One main challenge on the project is guaranteeing its impartiality and the credibility of the resources, especially with respect to historical events that raise a lot of dispute. Wikipedia is considered the main source of information for Al Fehrest but, because it's not completely reliable, every piece of information is reviewed and checked.

“We were aware that our information was contaminated by our reliance on Wikipedia alone, so we resorted to using mainstream historic books that have credibility with the public,” Mohammad confesses.

The site mentions the reference, page number and author, whereas any information mentioned before is reviewed and verified in reliable sources. During this process, it is made clear to the reader that the article is being reviewed so he knows better how to evaluate the content.

Al Fehrest is not the first Arab project that revives Islamic history and produces it in a simplified way for youth. Before Al Fehrest, there was an attempt by Dr Hussein Moaness, chairperson of History at University of Cairo in the 1970’s, who produced a paper titled The Atlas of Islamic Civilization’s History where he clarified Islamic trade routes and countries’ borders.

Today Mohammad attempts to produce a similar project with an interactivity feature to make the digital atlas more useful for today's public.

Al Fehrest is available in both Arabic and English in an attempt to address the non-Arabophone Islamic audience in Asia for example, which may not have access to good resources of information on the history of Islamic civilization.