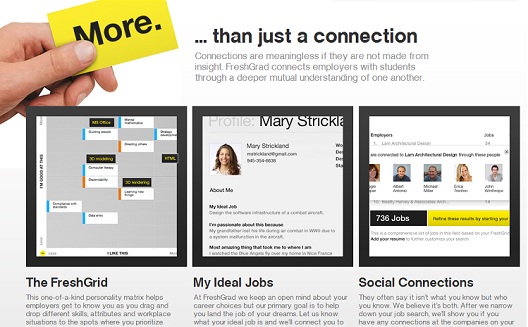 Between newcomers like Nabbesh, tasmeemME, Laimoon, and Wuzzuf, and veterans like Bayt and GulfTalent, the Middle East has its fill of job search platforms. But what if you're not even sure what you want to search for or what your best skill sets are?

New career-matching service FreshGrad has launched to solve this problem in the U.S., offering career recommendations based on an enormous database of aggregated data.

By analyzing users' resumes, interests, and assessments of their own abilities, FreshGrad  identifies skills, interests, and experience and recommending certain career paths and specific job postings.

Lebanese cofounder Roy Baladi launched the site in New York in August, choosing to become an entrepreneur rather than take his father's advice and find a job on Wall Street.

After working at Citigroup and feeling dissatisfied, he decided to help other college grads to find their career path, and co-founded the site for, well, fresh graduates, along with his brother-in-law, Yahia Hammoudi. 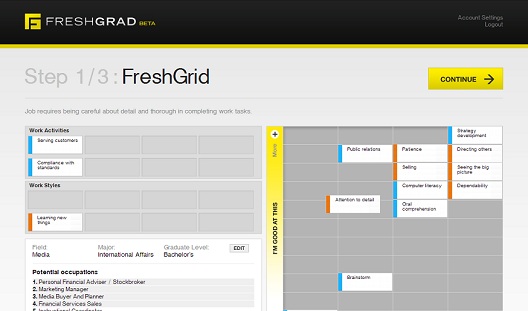 This is where the real fun begins. After FreshGrad suggests these 10 paths, users can click on each to see a summary of how many professionals are in that field, the expected growth in job availability, and average salaries. Below this information is a list of compiled job openings from the last 30 days in companies across the U.S. The site even shows you who from your LinkedIn or Facebook contacts are working in each of the fields, allowing you to take advantage of those connections.

Users also can click on a listing and are redirected to the specific company’s original application for that position.

The entire process is free for users, while FreshGrad makes money via a cost per click ad model, earning revenue when users click on affiliated partner sites. Eventually, they hope to accumulate a résumé bank and charge users to be featured, while also charging recruiters for access to preferred and relevant resumes.

Since its launch only 6 months ago, FreshGrad has grown to serve 1200 registered users and brought significant clients on board. Companies even use FreshGrad internally to identify hidden talent and interests among their staff, says Baladi.

FreshGrad currently only has jobs posting in the U.S., but they have aspirations to expand to Europe and the rest of the world as they grow. The major challenge on this front will be accumulating job posting data. Currently, FreshGrad’s database relies on the U.S. Bureau of Labor Statistics and large job data aggregators across the country. The majority of its users are on the east coast of the U.S., mostly in the Greater New York area.

To expand outside the U.S., they will need to find similar houses of data to feed their platform, in countries where extensive labor statistics may not be accessible.

“We’re a team of 5, so we rely on open source libraries and partnership to integrate with our service,” explains Baladi.

"Our unsung goal is for an international investor to be able to hire U.S.-educated locals to travel abroad because the U.S. economy isn’t growing that much, but the rest of the world is.” he adds.

It's funded primarily by Lebanese angel investors, friends, and family, however; the project has secured nearly $900,000 to date. By not only connecting users to jobs, but recommending a general career path, it differentiates itself from standard job search sites like Monster.com.

I tested the platform myself and found a few bugs, but overall I was impressed by the platform's layout and vision. One element that could be useful to add is data on whether or not their service has successfully placed an applicant in a job. Currently, FreshGrad relies on self-reporting, but entries aren't verified. Hopefully the team will find a way to systematize this. They've also begun asking users to suggest new skills or career ideas, to crowdsource its improvement.

I think FreshGrad will likely be a hit in the U.S., as many recent college grads are still without direction. The question is whether they will be able to expand to international markets, as Baladi hopes. Grads in the Middle East are also hungry for some advice and guidance in their job search beyond traditional career paths.