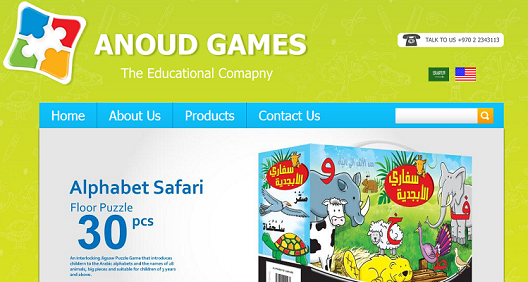 After the First Intifada in Palestine, there weren't that many educational games for kids in Arabic. At least that's Palestinian entrepreneur Rania Ghneim thought when she founded Anoud Games in Jerusalem in 1996.

The company, which builds offline educational Arabic toys, board games, and puzzles for children, gained popularity with a series of math games for elementary school teachers to play with students from kindergarten through 6th grade. Now officially approved by the Palestinian Ministry of Education, the games have become a regular feature in classrooms throughout Palestine.

Next, the team pivoted into entertainment. They developed Treasure Trip, a trivia scavenger hunt that quizzes knowledge about the Arab world, and licensed it to UAE-based toy company NewBoy, the creator of the famous Fulla dolls, who advertised and distributed the game across the region.

Since then, Anoud has stayed focused on education for kids, creating over 50 unique toys, board games, puzzles, and other educational tools teaching Arabic, English, numbers, and colors to children. To date, all of their games have been offline.

Anoud also delved into e-commerce, to sell its products online, but realized that shipping inside Palestine just isn’t feasible, says Ghneim's co-founder George Kusa, who left a job at UNDP to join her in building games. Now, they distribute their games via other international e-commerce sites, including NoorArt.com, and run a physical store in Ramallah, where they will be relocating their headquarters next month, for teachers and students to visit and test their latest releases. “Everything is happening in Ramallah,” says Kusa.

Now, the team is looking to further localize international concepts, for the Arab world. They've acquired licenses for famous characters, including the Smurfs, Spongebob Squarepants, Dora the Explorer, and The Teenage Mutant Ninja Turtles, and hope to develop over 100 different new titles for sale throughout the Arab world by the end of 2014. Investment by The Abraaj Group's Palestine Growth Capital Fund (PGCF) will help this expansion.

To enhance distribution in Palestine, they're also planning on going digital, building 20 new Arabic e-games for children that will will be released for free this year. Going mobile is a likely next step.

Building a team in Palestine

Despite the investment, Kusa says, “It’s very tough to get outside investors because the political situation is not stable; investors usually won’t risk their money in Palestine,” so they were lucky when Abraaj took the jump.

Being located in Palestine, and Jerusalem in particular, has of course been difficult. “There are a lot of challenges; the political situation is very tense, movement is very limited, it’s hard for us to expand,” says Kusa. “We live in a closed country that isn’t exposed to other Arab professionals that can add value to our company.”

“Once experienced people leave the country and go outside, they won’t come back to work for small businesses, they prefer to stay away in the Gulf, Dubai, or in the U.S. So it’s difficult to get new people on board.” With a current team of 7, the founders will use the new investment to expand the team to 16 over the next month, recruited from inside Palestine, to get a move on their ambitious plans.

For Palestinian entrepreneurs looking to start their own project, Kusa offers some advice: “Learn the word 'persistence' because, though we have good people with a lot of knowledge here, starting up is not as easy as in other countries. You need to learn the word persistence so you can push yourself forward.”