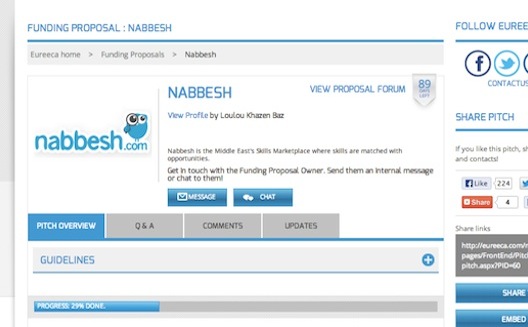 It’s 10am in Nabbesh’s offices in Dubai. The team is a bit speechless. “We’re at 29%,” someone says excitedly. Founder Loulou Khazen sounds surprised.

Crowdinvestment won't be the startup's only source of capital, as the startup is currently negotiating a series A round with institutional investors and business angels. Yet Khazen and her team decided to try to raise US $100,000, for a total equity stake of 6.67%, from the crowd, as a test.

"Crowdfunding was always something that I thought was very interesting," she says. "We always wondered why it wasn't bigger in this part of the world, because it’s a great way to raise money at an early stage."

An unusual series of funding

After launching last April, Nabbesh, which means "search" in Arabic, gained momentum after winning The Entrepreneur, du's reality TV competition, for its platform that focuses on connecting people with unique skillls for specific jobs. Taking home 1 million AED (US $272,000) in prize money enabled the startup to hire staff and develop new features over the past year.

Now, the site is integrating with PayPal to facilitate payments among freelancers, and hoping to launch a marketing campaign. When she heard Eureeca launched, Khazen decided to give it a shot.

Khazen easily could've stuck with angels and VCs as her sole investors, says Chris Thomas, Eureeca's co-founder, but launching a crowdinvestment campaign will allow the platform to leverage the power of the crowd. "Eureeca is much more than just a funding platform; it’s a marketing tool," he says, explaining that it also turns investors into brand ambassadors.

As one of the first to debut a campaign on Eureeca, Nabbesh can also make waves as a pioneer, he illustrates.

It takes a good network to crowdfund

To launch the campaign on Eureeca, Khazen adapted the pitch Nabbesh crafted for institutional investors; investors from the crowd will receive common stock as opposed to the preferred shares that her VCs will receive. Crowd investors can also opt to invest in future rounds, can receive dividends if and when those are established, and have tag-along and drag along rights.

Although startups on Eureeca can customize the rights that they offer, these are standard. "Eureeca are very keen on protecting their crowd investors," says Khazen.

If the number of crowd investors exceed a certain amount, a special purpose entity will be set up that will consolidate the investment and then invest in Nabbesh. 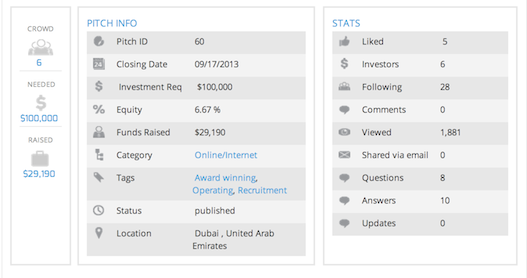 As with a successful crowdfunding campaign, a good crowd investment campaign sets an amount that's reachable, says Khazen. Nabbesh decided on $100,000, but she believes that future startup campaigns will be able to raise a lot more, once the public becomes more familiar with the concept.

To date, funders have invested an average of $4,500 each in Nabbesh, but the first one invested $15,000 alone, according to Thomas. The investors thus far have been equally divided by gender, and are mostly based in the UAE, likely because Nabbesh’s network is UAE-based.

It's unlikely that these initial investors were completely unfamiliar with Nabbesh before the campaign went live, so perhaps the founders weren't as surprised as they sounded, if they were in touch with, or notified, their biggest fans.

Yet the immediate burst of investment confirms that, at the end of the day, crowdinvestment campaigns depend heavily on one thing: their networks.

For its campaign, Nabbesh is tapping into a member base of 37,000, along with suppliers, friends, and their networks, over email and social media.

Like SSX, a startup stock exchange that recently launched, Eureeca is helping Nabbesh spread the word on media, and is also leveraging its own network of 1,000 registered investors. Since its launch last month, the site has seen over 100,000 unique visits, says Thomas.

So what will happen for the next startups that launch on Eureeca? Will their campaigns go as smoothly as Nabbesh's has in its first 24 hours? To date, over 60 small and medium-sized businesses have applied to run campaigns on Eureeca, says Thomas; the platform has spent its last month doing its due diligence.

“We want to introduce the idea of crowdinvestment, but we’re not looking to overwhelm our users,” he says. The platform will, of course, have to steadily build its userbase if it wants to guarantee startups a community of eager and willing investors.

It may be money that comes without expert advice (or, if startups engage with their investors, they may receive too much advice). Yet, Thomas previously told Wamda, "Ten years from now we will wonder how we ever survived without [equity crowdfunding]."