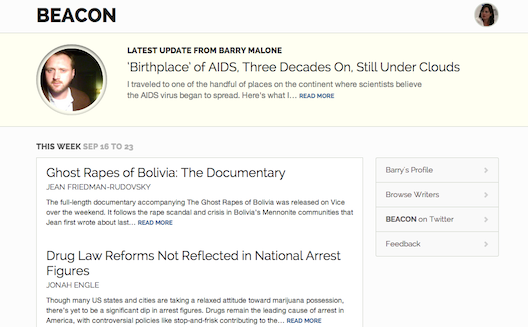 Beacon, billing itself as a new kind of media outlet, launched last week to considerable fanfare. The site works on a subscription basis: readers pay $5 per month to directly support a writer whose work they enjoy, and in doing so have access to exclusive work from a handpicked pool of journalists working around the world. Writers receive the majority of their readers’ subscription fees, with a percentage taken out to support Beacon’s small team and operations.

This launch is the latest in an increasing pool of media projects seeking to recast the traditional relationship between writer, media conglomerate, and reader. Outfits like Ev Williams’ Medium, similar to Beacon but without the paywall, seems focused on creating a community where writers (or engineers, or doctors) can post short pieces on anything at all, and readers can access and interact with them in an informal setting.

Other new media projects, like Demotix and Transterra Media here in Lebanon, collect photographs and articles from freelance journalists, then pitch them on the journalists’ behalf to traditional media conglomerates. The logic is that the middleman has more contacts and better relationships with big media, ensuring at least that the pitch is looked at, rather than lost in an inbox among all the other cold pitches.

Given the ongoing crisis in the traditional newspaper industry and the subsequent massive spike in freelance journalism over the past decade, it’s no surprise that services like these, ostensibly serving the writer rather than the big (bad?) media company, have proliferated. But, in the case of Beacon and Medium, will readers trust content that isn’t put through the traditional paces of proof-reading, fact-checking, and editing?

Beacon seems to be approaching this question by investing in the idea, nurtured by Twitter, that a significant part of journalism today is about the cults of personality built around the writers themselves. Co-founder Dan Fletcher tells Forbes that Beacon is “about buying into a writer as a whole,” rather than into a particular story or set of photographs.

Each of the nearly 30 Beacon writers have extensive profiles, with photographs and video, telling readers about their past work and what they hope to accomplish with Beacon, and of course linking to their obligatory Twitter feeds. Beacon writers do seem to know how to sell themselves as a product: in the writer profiles, more than one Middle East-based journalist boasts about how long they’ve lived somewhere, or how many times they’ve been to a particular hotspot, rather than focusing on their contacts or journalistic prowess.

But, while Beacon is benefitting from journalists’ Twitter swagger, its emphasis on longform content might be read as a reaction to the fragmentation of news into headlines and tweets, fueled by preferences for mobile. Longform journalism had two victories last month, with the launch of Medium-backed longform-only site Epic by two New York Times reporters, and Politico’s announcement that it would be focusing more on investigative work – in print, no less. It seems people want – and are willing to pay for – well-researched, impeccably-written, longform content. Beacon picks writers who not only have the online bravado, but who have also proven their capacity to deliver good work that’s longer than 140 characters.

Despite Beacon’s calculated model, it remains to be seen whether readers and fans will shell out $60 per year to read dispatches from a pool of freelance reporters.

In the Middle East, very few outlets are experimenting with longform journalism online, outside of print magazines that also have websites. Project Pen and 7iber.com in Jordan are two, neither of which would likely be able to implement a paywall. At Wamda, where you won't see a paywall anytime soon, we'll also be experimenting with longform, looking to see how the experiment plays out on other portals like PandoDaily (where Editor Sarah Lacy has noted its surprising success). At the very least, Beacon's move is an attempt to fix a broken industry – and the effort is appreciated.