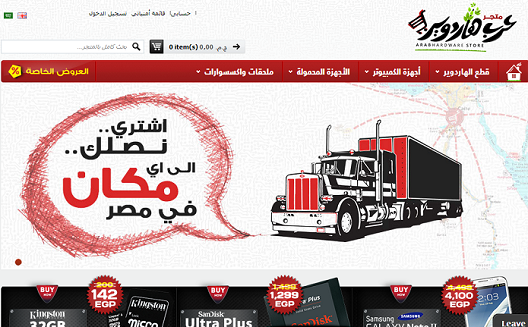 It’s not every day that a forum gains enough of a following to turn into an e-commerce store. But this is what Egypt’s ArabHardware has been able to do, albeit slowly. With a now 350,000 strong community of registered users and active readers, the hardware company today even has the ability to make or break a product with their reviews.

The team started off back in 2002 with a small volunteer-based Arabic hardware forum on a small Egyptian website, offering a space for hardware consumers and techies to discuss new releases and the latest technologies in the region. After slowly building the platform for four years, the team felt it was time to launch a website and broke away in 2006 to start their own site, ArabHardware.net, after seeing huge interest in their content.

Over the next three years, their community grew in Egypt, Saudi Arabia, and elsewhere in the Gulf. The founders, Ibraheem Hamdy and Mohammed Kamal, then launched a review lab in 2009 to offer online testing videos and reviews of different hardware products, making recommendations and how-to videos for users. As the community continued to expand, demand for regular content led ArabHardware to release their first digital and print magazine for the region in 2011.

Late last year, after becoming the largest IT community in the Middle East, the company finally turned on an e-commerce portal. Today, with an e-commerce channel, they have the power to make or break specific companies looking to sell in the region, says operations manager Kareem Mazhar. The platform sees 60% of users coming from their native Egypt, 25% from Saudi Arabia, and 15% from the other Gulf countries.

For example, says Mazhar, ArabHardware called out one Egyptian distributor who was selling refurbished hardware and computer components as if they were new. After their community stopped buying, the company was forced to recall its products. “This is where we found out the power of the website and that we could actually control the market through the articles that we write,” he says.

They may have a tremendous amount of say in the market, but ArabHardware is still involved in what is essentially, from an e-commerce perspective, a low-margin business; margins are typically below 8% in the segment.

But, ArabHardware offers two main differentiating factors, that the founders hope will help them inch up their margins.

For one, they offer high-end hardware, which is scarce in Egypt. Most distributors in Egypt who buy products abroad are only willing to buy low to mid-range quality hardware because of the huge cost of purchasing and storing high-quality inventory they may not be able to resell, explains Mazhar.

But customers in Egypt are actually willing to pay for more high-quality products, like the newest Nvidia graphics card, says Mazhar. “We’re the only people in the market who can get these products for customers,” he adds.

Secondly, ArabHardware also offers customers the ability to customize their own computer build online, choosing graphics cards, memory, and other additions, which the team will assemble in-house and ship to their door. “We have customers creating very high-end computers,” explains Mazhar.

By charging a bit more for these services, ArabHardware wants to “change the idea that a lot of people have that the electronics industry doesn’t generate a lot of revenue,” says Mazhar. “We actually will be able to prove that our margins aren’t only 3-5%, but can go to 10-15%.”

Currently the company only ships to Egypt, via Aramex, offering cash on delivery, credit card payment, and the option to pay at their office. Inventory is sourced from in-country distributors in Egypt or from manufacturers in Taiwan and Asia.

Although they don’t have exclusive contracts with any manufacturer, Mazhar believes that the community and trust the company has built in the local community is its greatest value, aside from the ability to push expensive products in the Egyptian market.

Challenges to scaling in Egypt

Recently, however, the company has encountered challenges above and beyond the regular e-commerce struggles of dealing with COD, educating the market, and building trust. Now, ArabHardware is seeing a noticeable dip in business from instability in the country.

“As you know, we started in the middle of a political war that is going on now, and this is actually one of the major things that affects our business,” laments Mazhar. “But fortunately we still sell during everything that is going on because people are not willing to go out and buy; they feel safer getting the stuff at their doorstep.”

Compounding some of these issues, Mazhar also that inflation in Egypt is having a negative effect on sales.

The upshot is that ArabHardware is a profitable company with a large community behind it, that will now be forced to scale further outside Egypt to find more stable revenues and hit that higher margin they are hoping for. If they can find investment, they plan to open a new head office in Dubai, and take on the Gulf market. That would pit them against the likes of JadoPado and Saletab, but it will be an interesting rivalry to watch as they come at the market from very different places.

With their traction in Egypt as a model, the portal hopes to soon be able to convert content viewers in the Gulf, 40% of their community, into customers as well. Neither JadoPado or Saletab started with that luxury, and it may make the transition for ArabHardware easier when they look to expand.