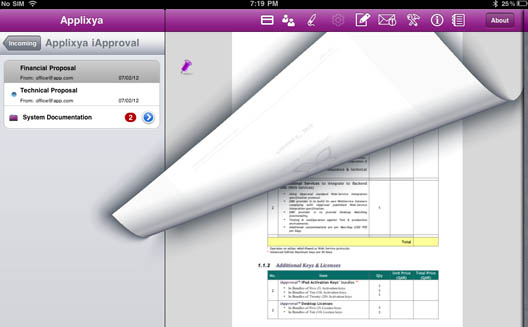 Having turned a profit since 2011, the founders of Applixya, an iPad app that allows highly mobile business executives to stay in touch with their companies, are turning their attention away from GCC executives, whose companies have until now been their main source of revenue, and towards international corporates.

“Surely, the years ahead will reveal higher levels of maturity, adoption, and proliferation,” co-founder Sadek Shunnar said when I questioned the ability of a Middle East based startup to tackle such a niche market of high-level executives. He already seems confident of how certain enterprise markets in the region, such as Dubai, are performing, and how he can capture opportunities.

Based out of Amman, Applixya is a provider of enterprise-level highly secure iPad solutions for corporate executives and high-ranking officials, to help them keep up with their correspondence and meetings while out of office.

Applixya's flagship product, called ixOffice Suite, enables businesspeople to instantaneously receive and review their correspondence, review meeting packs and agendas, communicate with meeting attendees, capture minutes, and perform a variety of other work tasks wherever they may be.

Whatever success Applixya has found might in part be due to the founders' foresight. “The advent of the iPad in April 2010 inspired our vision of redefining how corporate executives and high-ranking officials would interact with their own business using smart tablets,” says Shunnar, a 45 year-old Jordanian entrepreneur with a strong background in the enterprise software market.

He, together with Waleed Mashaqbeh and Khalid Juma’a, the other two co-founders, say they foresaw the proliferation of smart tablets in business, and decided to target “the early-adopter executives.”

In addition to these tech-savvy corporates, Applixya targets government entities, ministers’ offices, CEOs, and management teams of large organizations in the Arab region, especially GCC countries. The company has adopted an indirect model of reselling by appointing local partners in each country.

As niche as its market might seem, Applixya appears to be doing well. An average order filled by Applixya costs around 20,000 Jordanian dinars (about $28,000 USD). For such a high asking price, clients get executive training, technical "train-the trainer" training, free first year maintenance and technical support, bi-annual on-site visits, and on-site technical support if needed.

Shunnar tells me they get around 4-6 orders a year, as well as 2-3 expansion orders from current clients. Applixya's team of seven full-time employees, including the founders, work around the clock to fill these orders. Each order requires around 1-2 weeks of pre-deployment remote testing of the environment, as well as another two weeks of on-site deployment and training.

Applixya has no direct local, or even regional, competitors. Internationally, a number of similar services do exist, such as DocuSign and The BoardPacks, however, Shunnar claims that none of them offer the corporate/government level of support and encryption that his product does.