The event attracted around 30 developers, designers, and entrepreneurs, all of whom gathered in an intense and focused atmosphere, with the goal of building functional mobile apps and games in less than 12 hours.

The DevAppLB 12­-Hour Hackathon’s‘Ultralight’ aspect was meant to push entrepreneurs and developers to work more on simple projects that required less time. “Instead of having startups work on complex solutions that take months or years to develop, we want developers and entrepreneurs to focus on startups that can launch in beta version within days or weeks,” says David Munir Nabti, CEO of AltCity in a press release. “Speed is a critical component of web/mobile and tech entrepreneurship these days.”

In addition to simplicity and speed, the Hackathon pushed the participants to work on apps or games ideas that were assigned to them, rather than their own. The ideas were generated through four ‘ideation’ sessions held last April at three university campuses in Beirut and at AltCity.

“This gives equal chances to all participants, as most of the time people come prepared to these kind of competitions,” developer Ibrahim Fleifel says approvingly, who worked on a “sleep talking” device that records all the sound you make while sleeping.

“These kind of competitions help me, as a developer, take a break and work on something different for a change. If I was to choose my idea I would have chosen something in the same field of my work or interests, so the hackathon allowed me to explore and test new topics,” Fleifel says. 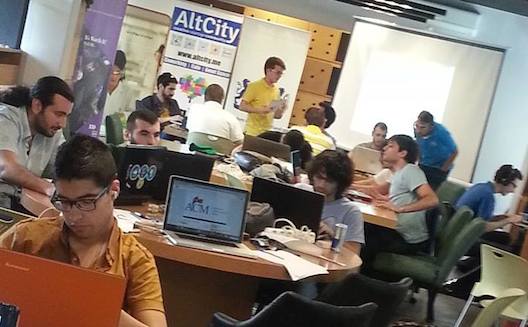 At 9 AM sharp on May 3rd, each team picked a balloon that was labeled either app or game. The teams then simultaneously popped the balloons to find the brief of the app or game they would be developing over the next 12 hours.

“We think this kind of dynamic energy and enthusiasm is critical to drive the startup ecosystem forward in Lebanon,” says Mouhamad Rabah of Beirut Digital District, a partner in the hackathon and host of the event.

Organized by AltCity in collaboration with Al Mawarid Bank, Beirut Digital District, and Middle East Venture Partners, the Hackathon started with ten teams working on eight apps and two games. The teams worked continuously till 9 PM, at which point the final pitches and judging started. Each team had three minutes to pitch their progress to the jury included Elie Nasr from FOO, Joe Hannouch from GameCooks, Ayman Chalhoub from NYMGO representing BDD, and David Munir Nabti from AltCity.

After an hour of pitches, the jury announced the three winners. First place went to team CtrlCity (Karim Frenn, Guy Daher, and Sami Ramly) that worked on a weather app that suggests what clothing to wear, either at home or while traveling.