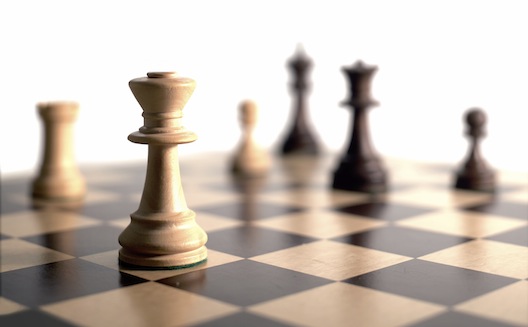 The Wamda Research Lab’s new report on investment activity in the MENA region highlights several alarming data points. The finding that investors don’t believe that entrepreneurs are capable enough at defining and directing strategy for their companies is the first among them. More than half of investors – 56% – identified “strategic planning and decision making” as the biggest weakness among people who start companies in the region. The second-most cited weakness, insufficient financial literacy, also goes to a business-owner’s ability to learn a market and maneuver into an advantageous position within it.

This article aims to provide a brief overview of one of the most popular models for thinking about strategy – the Five Forces model. Readers who are interested in learning more should watch this lecture by Harvard Business School Professor Michael Porter – and they may consider reading his authoritative book, Competitive Strategy.

What is competitive strategy?

Many people have an intuitive sense of what strategy is. They may think of it as a way of matching goals and actions, of steering an enterprise, or of matching competencies to opportunities. According to Porter, “strategy is the big picture of how an organization is going to win in its environment, whatever that is.”

Porter’s big contribution to the study of strategy came through the development of a five-forces framework. It allows practitioners to understand the industry within which they compete and their strategic position within the industry. For example, the airline industry is notoriously difficult to achieve a profit within; that’s borne out by an industry-level analysis. Yet individual carriers are capable of producing better-than-average returns through focusing on positioning within the industry. Ryanair and Emirates are both airline companies that achieve profitability, but they do so through vastly different strategic choices and positioning within their industry.

Here it’s worth clarifying the difference between “operational effectiveness” and “competitive strategy.” Operational effectiveness is about doing things well or more efficiently – using Excel instead of pen and paper, building macros that run models instead of running them manually, streamlining processes, and so forth. Strategy is about steering an operationally effective ship to the richest fishing waters available to it, given its capabilities.

To extend the analogy, a highly efficient whaling ship will fail to catch whales if its captain steers it into the Mediterranean – a strategic failure. And a whaling ship whose harpoons are dull, whose crew is disorganized, and whose sonar is outdated will fail to catch whales, even if it does sail into the Pacific. Both operational effectiveness and strategy are necessary for success. But they’re different. 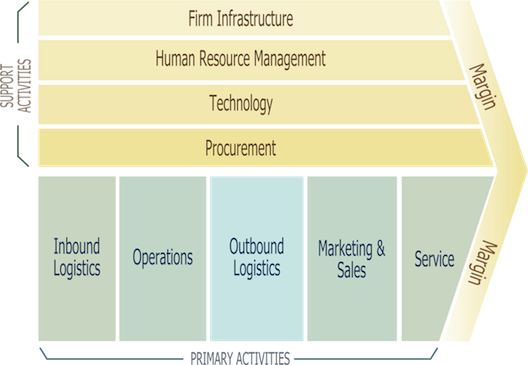 Before Competitive Strategy was published in the 1980s, researchers, economists, and practitioners had a fairly limited view of competition. Many regarded it (and continue to regard it) as a zero-sum game in which companies work to seize market-share from their competitors. That struggle ultimately leads to undesirable profit erosion.

Porter encourages executives to think instead about a range of forces that contribute to an enterprise’s entire value chain and value proposition. Through value chain segmentation companies can identify their best opportunity at “competing to be unique,” a characteristic which can drive profitability.

The five forces are:

Any company that delivers something to customers has suppliers. A furniture maker may be supplied with lumber through a mill or distributor, workers who make the furniture, electricity, and so on. A video game company relies on talent, which is a necessary input for the industry (as well as an expensive one).

Invariably, suppliers have bargaining power. One part of a company’s margins is driven by its relationship to suppliers.

Similarly, buyers in a market place may affect the price of goods through a range of activities that enhance their negotiating power. They may possess better information or the goods themselves are abundant. Significantly, buyers may have substantial or limited bargaining power on price. Buyers in luxury markets have limited bargaining power while those in commodity markets have more.

Are there substantial barriers to entry in one’s industry? For airlines, the answer is yes. Airplanes are expensive. Licensing is a challenge to attain and in many markets domestic carriers are protected through legislation. But the barriers to entry alone are insufficient for driving profitability.

One example that often comes up here is the iPod. Before its creation, CDs were ubiquitous. Today, people rarely use CDs and a whole new industry has been created.

This one is self-explanatory. Do industry participants compete intensely on similar products? What does the existence of Coca Cola do to PepsiCo’s ability to generate profits through soft drink sales? 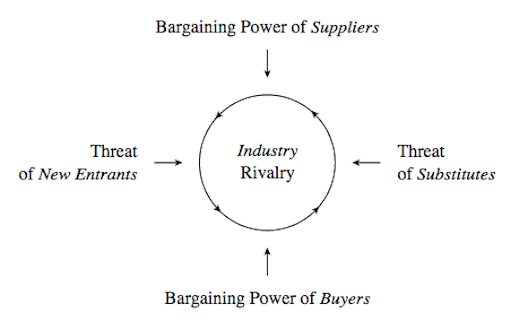 Understanding one’s industry is a research-intensive undertaking. It’s something that entire consulting practices are built around. But once the analysis has been completed, developing a viable, defensible strategy for maintaining and growing profitability becomes paramount.

Each of the inputs into the five forces model provides an opportunity for a company to assess the underlying relationships that impact margins. And invariably different companies with different strengths can deliver on those opportunities in different ways. Walmart has enormous bargaining power with suppliers, a fact that ultimately allows it to compete on price with competitors, for example.

Porter encourages managers and executives to avoid competing on the same dimensions as competitors, a strategy that will ultimately erode margins. Instead, he suggests that companies compete to be “unique” – which is the opposite of being everything to every customer in an industry. This strategy can be described as competing on differentiation.

The executive team at Emirates actively chose not to cater to price-sensitive travelers – a strategy supported by their access to resources and internal competencies. Managers at Ryanair actively chose to ignore the entire luxury traveler segment of the market, which was supported by their resource limitations and geographic location when the strategy was articulated. Those choices have allowed each company to thrive in an otherwise crowded and competitive industry.