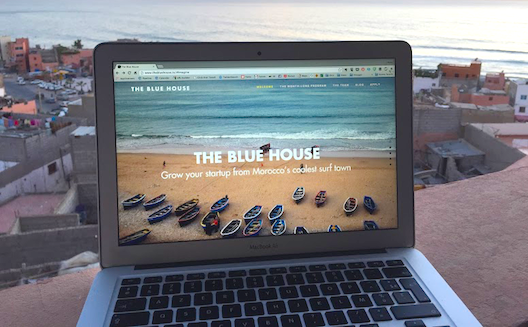 Surf tourism has grown in popularity over the years, and Morocco’s little village of Taghazout, north of Agadir, has not escaped this trend. With its beautiful coast and picturesque setting, it is understandable that it has become temporary home to traveling surfers and yoga practitioners alike. But there’s another segment of this tourist business that is worth a more in-depth look - the entrepreneurs.

Speaking to our core values

Entrepreneurs are increasingly finding value in a change in setting. If it could be a coffee shop, a coworking space, a friend’s couch - so why not a whole different continent?

Entrepreneurship comes come in many forms and initiatives, and for Wamda’s French editor, Aline Mayard, it came as the Blue House project, which she launched in Taghazout over the last couple of months. We hold entrepreneurship at the very core of Wamda’s mission - a number of our team members are founders themselves - and working closely with entrepreneurs in this ecosystem can get really, really inspiring. So when Aline shared what she had been working on with us, we were all psyched.

Fishing for the right spot

Aline first heard about Taghazout while talking to the founders of UK-based Maptia, and Moroccan-American collaboration Chui, who had visited the town to enjoy its sandy shores, surf, and focus on work. When she heard that they had all ended up extending their stay, she became curious. 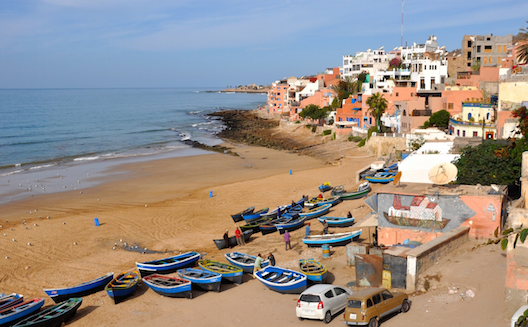 You could be cooped up behind your desk, or working on your pitch with this view. Your pick.

She landed there in February 2014. “I immediately understood why people loved it,” she says. “In the three days that I was there, I was more productive than I had felt in a while.” She realized it was the perfect opportunity for her to launch her first enterprise. “In August, I decided that I wanted to create not just a coworking space (there’s already one called SunDesk), but a safe space for startups to think.” She set off to do research on what type of environment would help bring her vision to life, and surveyed founders to understand their needs.

Although she launched the project with a cofounder, Aline now runs the show on her own. “I met him on Twitter, a reader of Wamda, who had said he was thinking of opening a place,” she shares. With the cofounder living in Paris, the two then set out to meet regularly and distill the idea into a structured concept before heading out to Morocco. They’ve since parted ways but stay in touch. The operation is lean: Aline explained that she has only spent money on plane tickets, a few Facebook ads, rent and salaries. “I spent money on conferences because I wanted to talk to people and see what they thought about it [the project].”

The Blue House hosts ‘startups in residence’ in cycles that were initially scheduled to last for a month. This has now been adapted to two-week cycles. “Since we take care of everything, it doesn’t really require that much time to adjust to the place,” she says. The Blue House handles everything from accommodations, meals, internet, laundry, and leaves the entrepreneurs with time and energy to focus on their business - for a fee.

“There are also a lot of activities that are planned to make the entrepreneurs think and collaborate better,” she adds, as she describes the time they spent learning how to surf. And she may be on to something; such activities are known to encourage quick thinking, and what better way to break the ice between strangers than having them go through the awkward and strenuous exercise of pulling themselves up on a board and fending off waves without crashing face first? 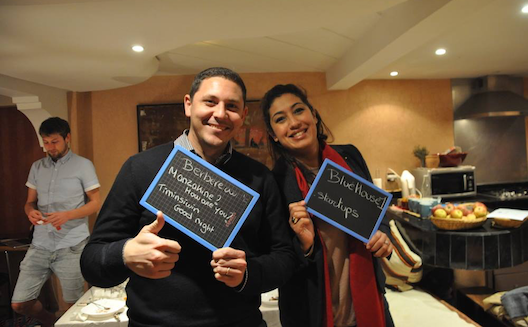 “It’s about perseverance and fighting different elements and that’s something that has a lot to do with entrepreneurship and that’s why a lot of them are surfing. You’re in the waves, you’re completely away from everything else, and you get smashed and that reboots your brain,” Aline explains.

And then, the Blue House opened its doors for business.

Because much of the Blue House experience relies on open communication and cross-pollination of ideas, the quality of participants was crucial. Aline says she is very satisfied with the caliber of startups working out of the Blue House. Some came to rethink their business strategy, some to crystallize thoughts into a new direction before pitching to investors, and others needed some time to regroup before taking their next step. Working out of the same space allows them to collaborate, help each other face challenges, and even potentially discuss partnerships. 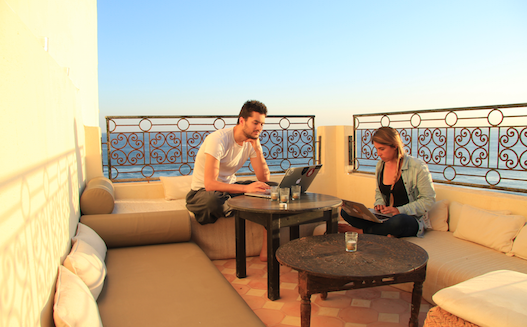 When we reached out to the startups, one entrepreneur, Nordic Design Collective’s Maria Richardsson, noted that the change of environments allowed her team to see things differently. “We realized after a couple of weeks that we got very relaxed. We were working about ten hours a day, seven days a week, much more than at home but [...] we were feeling totally relaxed and that was partly because we had everything organized,” she adds. With everything else taken care of, the teams could focus on what really mattered.

Although the format accounted for a weekly scrum, Aline realized that much of the conversation was happening at tea time, lunch, or dinner and those were more conducive to valuable exchanges between the founders.

It’s not always rainbows and butterflies

When it comes to balancing work load, Aline certainly piqued my curiosity. Given her commitment to Wamda, we were firsthand witness to her change in lifestyle. “I stopped sleeping and eating,” she laughs, “I was more efficient in the morning so I made sure I had 2 hours in the morning to take care of writing articles and limited email checking to every 3 hours.”

Switching roles between journalist to entrepreneur isn’t easy. Aline now works weekends as well. While the lifestyle may appear unhealthy, Aline advocates good health. “This is why I created the Blue House, because I want them to have a more healthy balanced life,” she noted. “But that being said, it’s not possible when you launch, and when you don’t have the money.”

Currently interviewing a startup for the month-long program. It's boding well!

Posted by The Blue House for startups on Tuesday, November 25, 2014

When teased about the lifestyle of entrepreneurs, she joked: “I learned that entrepreneurship sucks. It’s funny as a journalist - I’ve been listening to what [founders] say everyday: "I want to quit for five seconds and then I see everything that I’ve done", and now I understand it,” she said. “It’s so great to see your vision come to life, the entrepreneurs having a good time and everything that I’ve done so far. You cannot afford to be sad or down because somebody yelled at you on the phone.” And then she noted that in the end, whenever she needed help, all she had to do was call on someone from the ecosystem.

In order to build on the bond founders have created with each other, Aline maintains different Facebook groups for the cycles’ participants, speakers, and trainers. The Blue House is already planning its sessions for September. “We want to maintain that link, and every quarter or semester we want to make a big weekend for all to come, including journalists and investors who just want to mingle with the community,” she adds. In June, Aline plans to travel around Europe to show the impact the cycles have had on participants. Whether or not she will need to add more facets and structure to the cycles remains to be determined, but one thing's for sure, the Blue House is laying the groundwork for a cross-cultural network both entrepreneurs and experts stand to benefit from.