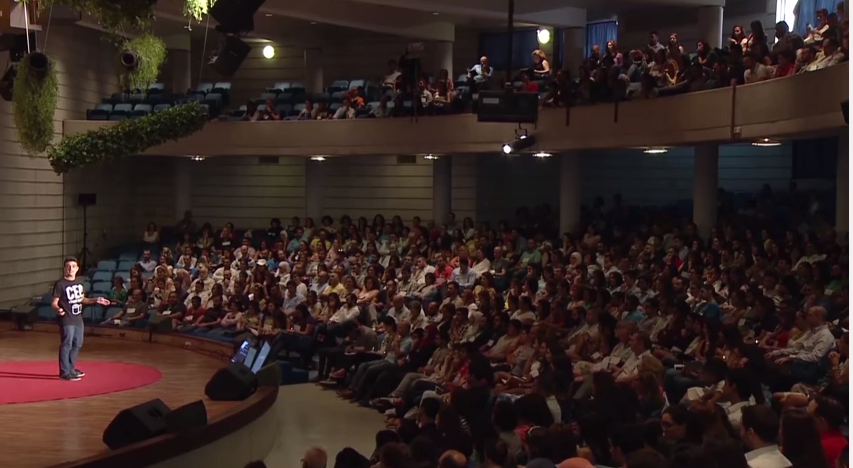 It’s a busy time for Jihad Kawas. The 18-year-old Lebanese is wrapping up his final year of high school and preparing for the next chapter of his life. But instead of getting ready for university, he’s dropping out to work on his startup, Saily, after winning $100,000 cash prize from the Thiel Foundation.

It isn’t his first startup, to be sure. Perhaps more noteworthy is the fact that Kawas is Lebanon’s youngest CEO. Even more improbably, he is one of just 20 entrepreneurs from around the world who were selected from a pool of 2,800 applicants to become Thiel Fellows, pushing him to skip college in favor of doing something potentially bigger.

Peter Thiel cofounded PayPal back in 1998, before the company went public in 2002 and was sold to eBay for 1.5 billion dollars. Now a venture capitalist and a hedge fund manager, Thiel had invested $500,000 in Facebook in 2004 before joining its board. He then created the Thiel Fellowship in 2010, with a very unconventional - some might say provocative - approach.

Thiel Fellows are given $100,000 and access to mentorship from the Foundation’s network of founders, investors, and scientists, on one condition: they have to skip or stop college for the two year duration of the program and work on their startups. The number of applicants for this year’s fellowship reached a record high this year.

“Our fellows learn more from the Fellowship than any college can teach,” said Jack Abraham, Executive Director of the Fellowship. We want to support talented applicants as soon as they’re ready, because great ideas can’t wait.”

Indeed, this year’s fellows are working on impressive projects, like smart contact lenses that measures vital signs, software platforms to streamline and possibly revolutionize global shipping and supply chains, a Tinder-like platform for apartment rentals, direct-sync technology to eliminate subtitles, and sophisticated drones for consumer and commercial applications, among many more.

Kawas worked on many projects before launching Saily, the startup that helped him win the fellowship. Saily is a local marketplace that helps neighbors buy, sell, and swap secondhand products quickly and seamlessly from their mobile phones. Saily’s mission is to “help build neighborhoods that don’t let anything go to waste.” 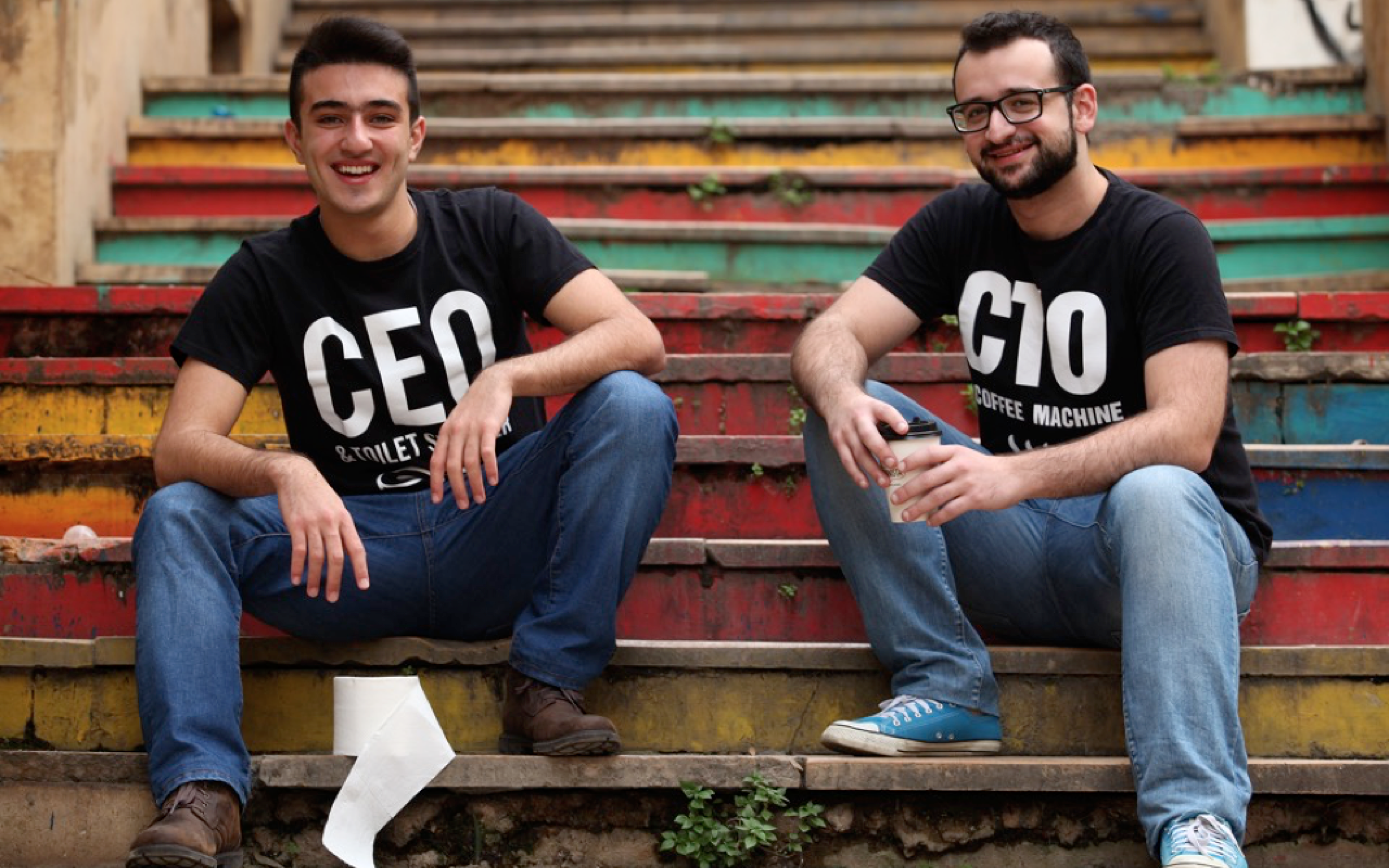 Kawas and his co-founder, Dany Arnaout

It all started with TV

There’s a bit of serendipity, humor and luck behind Kawas’ application for the Thiel Fellowship.

“The first time I heard about the fellowship was in New York,” Kawas recalled. “I was watching The Silicon Valley show, and saw a part where a tech billionaire gives a 100K for students to dropout and work on their projects. My cofounder and I laughed, and thought it was a funny joke. A few months later at the Apple Worldwide Developers Conference (WWDC) I actually met a fellow, and was like: ‘Oh, this sh*t is real’. Honestly, I wanted to surround myself by smarter people hoping to get better at what I do. I totally believed in the mission, and wanted to take my shot!”

Go your own way

As a child, Kawas wanted to be a painter when he grew up.

“He never did things the same way others did,” his mom said. Kawas’ childhood friend Ali S. said: “If all the doors are shut, Jihad will enter from the window.”

By the age of 14, he was already a speaker at the Tedx Beirut’s edition, discussing how, driven by his personal needs, he taught himself how to code, and how to build his first mobile application.

Two years later, Kawas was on stage again at Tedx, but this time to discuss why schools are not ready for young talent like himself. In that talk he shared how entrepreneurship changed his life, created opportunities and “made him better at what he is good at.”

While the Thiel Fellowship is the biggest entrepreneurship contest Kawas has won, it isn’t his first. In 2012, he won his first competition at the MIT social innovation camp, where he met Dani Arnaout, and started working together ever since.

Then his team won 2nd place and 10k at MIT entrepreneurship forum in 2014, and placed first at StartUp Weekend in Saida (South Lebanon), where he had launched Saily. He also won tickets to TechCrunch New York, a trip that opened his eyes even more, and made him much more confident about the path he was on.

“I’ve always wanted to build the world I live in, instead of just living in it,” he said in an exchange shortly after the Thiel fellowship was announced. First thing I’ll do with the 100k, is fly back to San Francisco for a couple months to keep learning and improving Saily.” 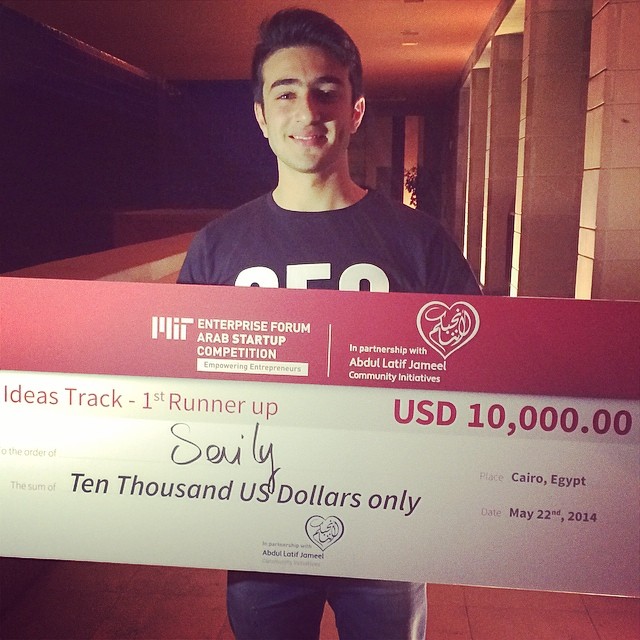 The values of a startup philosopher

When it comes to role models, Kawas goes to whomever has an advice for him. “I had many people helping, supporting and advising me, however I always took the decisions that convinced me, many wrong, many right. But the most influential ‘godfather’ of my decisions, is a guy I never met, Paul Graham, founder of Ycombinator and [a] startup philosopher.”

But has the young Kawas tasted the bitter - and educational - fruits of failure?

“It’s something we’re taught to avoid at school, however, it’s the main ingredient of success,” he said. “I fail a lot, and it’s not bad, in fact I rarely learned from a success, it’s always failure that teaches me the most.”

It’s too early to say how Saily will do. But if the Thiel Fellowship is a good indicator, Kawas has a good chance at success.

Collectively, the 80 current and former Thiel Fellows have already raised more than $142 million in venture capital and generated $41 million in revenue. The fellows have also created 375 jobs in the course of tackling problems ranging from telemedicine and human longevity to solar energy and clean water.

In the meantime, Kawas is making the most out of his age.

“Being young is a blessing,” he said. “Everybody wants to help, they all see potential in such an investment. It is an asset any entrepreneur/builder should make use of.”

The Foundation also announced that it will expand the program to accept up to 30 fellows each year, and that, effective immediately, it will begin reviewing Fellowship applications on a rolling basis.