Egypt has an alarmingly high population density which is a major cause of social and economic problems.

But if you look at an ecommerce map of the country, you find that high population density is a key reason why Egypt ranks alongside the UAE, Saudi Arabia and Kuwait for the highest number of ecommerce customers in the Middle East. Indeed, Egypt tops this market with 30 million ecommerce users, or one third of the total online buyers in the region.

It’s these numbers that are encouraging new ventures into Egyptian ecommerce.

About two years ago Wamda noted the absence of competitors to Edfa3ly, the Egyptian international shopper service that lets local customers buy from US websites and pay locally.

Yet Edfa3ly's first competitor, DealGamed, appeared only six months ago with a site allowing customers to shop internationally at prices that include Egyptian customs taxes.

The startup operates on the same model as Edfa3ly, which now runs the online shopping website Yashry.

"DealGamed offers the same services (as we do), and is our main competitor," said Ahmed Mohammed, one of Edfa3ly's three cofounders. "But we are betting on our entrepreneurship (innovation) in this field, and on our partners' loyalty, as well as the elite program which we recently launched."

"By participating in this program and paying a fee for six months, a customer can get the product he orders without paying customs or shipping fees," Mohammed said.

Mohammed refused to reveal any numbers around unique browsers or the value of purchases, but DealGamed’s digital marketing manager Ayman ElHakim - who used to work for Edfa3ly - had no such reservations.

"The steps we (at DealGamed) took in the previous six months were phenomenal," he said. "We managed to attract a considerable portion of our target market. We have 80,000 to 100,000 monthly visits (on the website). Also, the number of monthly purchases reached 1,500 purchases, and this helped us to break even with our monthly costs, which is in line with our plan to reach a total tie by the end of the year."

DealGamed executive director Mustapha ElBatesh says these numbers can be attributed to two factors: sound strategic planning and the “amazing work experiences" of the company.

"All employees come from international corporations and have lengthy experience in their field. They go through several selection processes until they are recruited to join the team."

DealGamed’s founders are looking forward to securing Series A investment, after receiving seed funding from an American investor who decided to take the risk, despite the fact that the company is registered in the US.

"(If) we get the investment round, we will be able to diversify the offers we currently have on our local and international platforms," said ElHakim. "This way, we can increase our sales and raise our overall financial position." 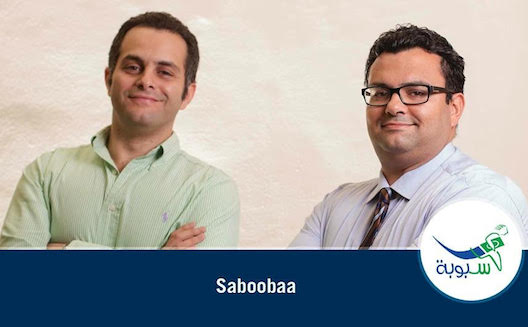 "Our platform enables users to sell and buy items under one umbrella," Mahmoud Elfeky says of his almost year old venture Saboobaa, named after the Egyptian slang for an additional source of income.

"We very well know that Egypt has a lot of talented and skilled [individuals] who want to increase their income, so we decided to launch Saboobaa so these youth can have an extra source of income by using their skills and abilities," he told Wamda.

"We don't deal with second hand items, all of the products featured on our website are 100 percent new, and they involve various fields like food and beverage, clothes, medical consultations and even specialized skills that can be marketed by individuals."

The cofounders have noticed that the highest website visit rates come from women who use the site to buy or display food and handmade products.

As for delivery methods, these differ according to the product, Elfeky says. "Some consumers prefer to deal directly with the seller, while others require delivery service, where we currently partner with Ingez for that."

Saboobaa is designed to provide a safe user experience by relying on consumer-protection systems that provide security for personal information and guarantee the rights of the buyer and the seller.

"The website offers a product-rating feature so that consumers would not be cheated. In case of a complaint about a product, the money is immediately returned to the consumer, and the (incident) is viewed as a warning to the seller," Elfeky said.

"The user cannot perform any operation on the site unless he registers, specifically if it's buying or selling."

Saboobaa is also testing the use of its own in-site parallel currency. The ‘bont’ is the official Saboobaa money, with one bont equaling 10 egyptian pounds ($1.28) and a minimum purchase of five bonts ($6.38).

Bonts are converted to fiat currency through Paypal or by Cason-Delivery.

The payment method is one way to maneuver through the challenges Egypt's ecommerce sector is riddled with: fear of online payment, the scarcity of citizens with bank accounts (about 35 percent of the population) and the high costs of logistics and marketing operations.

Whether entrepreneurship can pave a new path for the Egyptian industry, however, by ecommerce ventures that suit Egyptian consumers’ nature is a question that remains to be answered.