Egyptian comic book publishers, Noongam, have snagged the biggest prize at DSOA’s The Entrepreneur Day with their platform Magnoon.

Founder of Magnoon magazine, Hani Ghaith, defined his product as "a platform for comics and the visual creativity of Arabs, and [dedicated] for Arabs as well".

He hopes that the prize will get him more exposure and therefore more partnerships, especially that his company "has entered the profit and money-making stage". 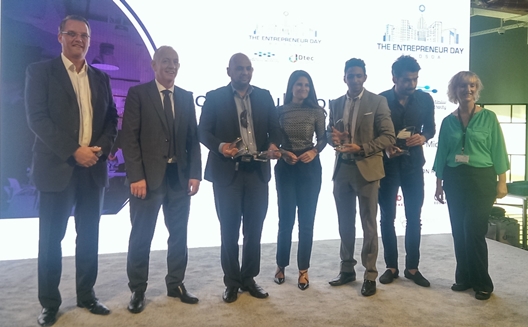 Winners of the Entrepreneur Day event. (Images via Pamela Kesrouani)

Organized by the the Dubai Silicon Oasis Authority (DSOA) on December 9, for the second year running, the event was held at DSOA's Dubai Technology Entrepreneurship Center (DTEC).

Noongam had previously won an ‘Islamic Economy’ award from Al Azhar university for its collaboration with them, to promote Nour magazine, which circulated on social media networks and taught children about human rights.

Director of DTEC Henrik Christensen told Wamda that almost 300 startups from all over the globe had applied for the competition, where only eight competitors were shortlisted. “They were nine in the beginning but a Jordanian startup couldn't attend because of visa difficulties," he said.

While for some the competition may have been the cornerstone of The Entrepreneur Day, for Christensen, it was the event as a whole. "It's the largest [event] we organize,” he said. “It's a chance for the companies in our centers and the entrepreneurs we support to showcase some of their work, and for our partners and sponsors to be present."

On a larger scale, the event included an exhibition that featured some of the startups of the Silicon Oasis Founders and others in DTEC, as well as other international startups with an interest in expanding in the region.

The Entrepreneur Day could not be held without having discussions and participations of the big players of the region. 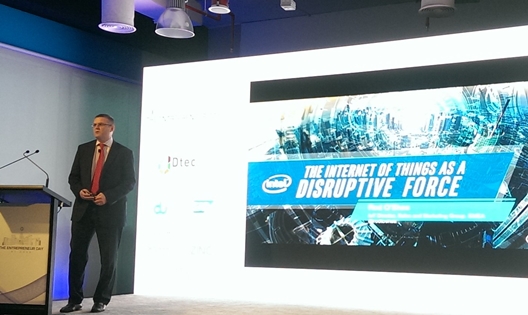 “The internet of things would be like a force of revolutionary changed”, said Rod O'Shea.

While the day had a focus on three sectors, Islamic economy, travel and smart cities, it was the latter two that got the most attention.

Rod O'Shea, Intel's director for IoT in EMEA, talked about IoT and smart cities. After remarking on how many seemed to joke that "the only ones benefitting from the IoT are the event organizers," he stressed that IoT was having "intelligence everywhere". As such, he said that four sectors in particular should be using IoT to develop - aging populations, accessibility to food, managing urban prosperity and the environment.

The travel sector, and in particular tech borne out of the sector, was the topic of a discussion that included keynote speakers Sinjay Sharma, manager of IT innovation at Emirates Airlines, Aftab Sayed, director of Ecommerce and Digital Services at Marriott International MENA, and Vineet Budki, founder of Guiddoo World.

Many of the speakers talked about how innovation is key to changing the way we travel, book flights and share our experiences.

Budki said optimization was essential as users want unique products and experience. He also mentioned that technologies relying on predictive analysis are helpful in data analysis and obtaining results.

He explained to Wamda that if a user had taken a lot of cultural tours in Italy, they would then be able to use the data of this trip to help the plan a trip to Singapore.

"The important thing is not to pigeonhole customers," he added, "but to take the available data in order to understand their personality and what they want."

Ultimately though, he said, safety and travel is a priority. As a result this might sometimes limit the adoption of, or testing of, new technologies in large corporations. He pointed to the importance of filling this gap and changing the company culture towards embracing change and innovation, all while not neglecting the safety of their clients. 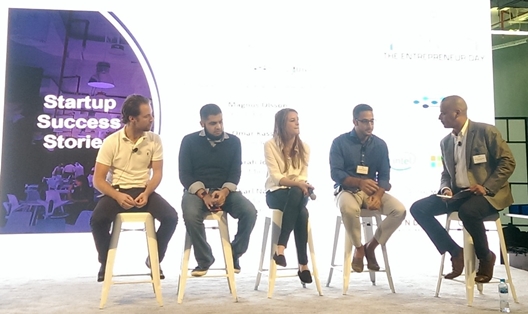 All speakers agreed that the key to success lies in passion, persistence and non-stop work, as well as a qualified and coherent team. 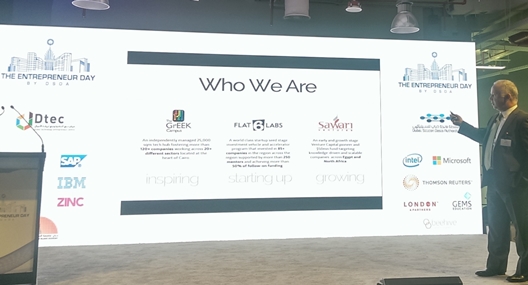 Ahmed El Alfi speaks about the organizations he collaborates with, and how entrepreneurs can benefit from them.

Cofounder of Sawari Ventures and Flat6Labs Ahmed El Alfi was adamant that while you can learn anything, and you can teach anything, you can’t teach entrepreneurs how to want something.