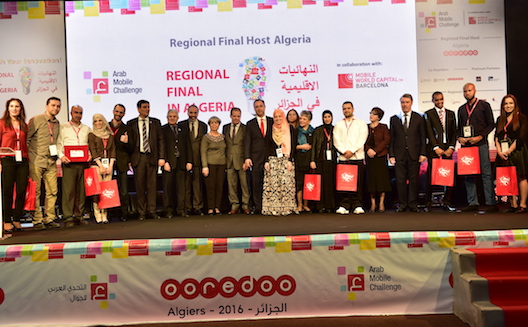 Five teams from five countries are heading to the world finals in Barcelona. (Images via Arab Mobile Challenge)

App developers from 19 countries in the Middle East and North Africa, including Sudan, Morocco and Kuwait, participated in the third edition of the Arab Mobile Challenge.

Contestants were divided into two tracks – idea and startup – to better fit the level of each developer.

The regional finale, which took place in Algiers January 11 to 12 rewarded two teams with $20,000 and offered five others a trip to Europe’s number 1 mobile conference, Mobile World Congress Barcelona.

So, who are these young Arabs creating tomorrow’s mobile world?

Diversity is at the core

They’re predominantly students, many are women (35 percent of the participants were women), and they hail from all around the region.

“The goal of our program is to provide a platform to Arab youth – this means all Arab youth – […] to support their entrepreneurial journey,” said operations manager Marc Tanas for Imtiaz, the NGO in charge of this MENA chapter of the Global App Challenge. “Therefore we try to be accessible to taken everywhere.”

The organizing team visited seven countries - Jordan, Algeria, Kuwait, Oman, Tunisia, Egypt, Qatar – to meet and train applicants during an acceleration day. Teams in other countries were able to access the training online via a toolkit and mentoring platform.

While last year’s choice of hosting the final in Dubai was obvious, this year was a bit more surprising.

“We have seen incredible talent come through [Editor’s note: from Algeria] over the last few years, we know there is mass and interest,” Tanas recalled.

Algerians and Tunisians accounted for half of the participants last year.

Going to Algeria this year was also a good way to continue reaching to MENA areas that are not receiving a lot of mentoring, training and interest. However, finding the right local partner ultimately made the Algerian finale possible.

“[Local telco Ooreedoo] was more than willing to support our vision and bring the first regional program to Algiers, “ Tanas added.

“Our teams were beyond excited to see one of the most beautiful Arab countries which they typically wouldn’t have been able to access easily,” Tanas said. “Providing access to areas many programs don’t even consider, we consider this a big win.” 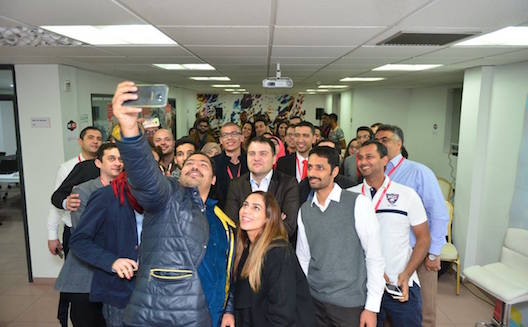 Of the 24 teams competing in the final, two won a financial prize and five were qualified to compete at Global Mobile Challenge of the Mobile World Congress Barcelona in February.

This year, education and healthcare sectors were still darlings of the contestants, Tanas explained.

-        MyU from Kuwait built an internal social network for schools

After graduating from engineering schools, the cofounders went on to get full-time jobs with app developers in the UAE, working on PVA in their spare time.

Feedback from the event was valuable, they said. The team is now getting a patent for their algorithm and the project. They’re networking – meeting talented people from different countries with different cultures and experiences. After attending webinars and extensive research, they’re now focusing on their business model to ensure PVA is financially stable, said cofounder Mahmoud Maknon. This prize will help them finish some features and launch the beta version.

Helping people move and use services in urban areas was another big trend:

Bookr from Kuwait won the Startup track with an app that lets users book appointment-based service like salons and fitness trainers. The prize money will help her expand to other GCC countries.

Next up, the five seleted teams will show what they can do in front of an international crowd in Barcelona.

They’re expecting the same benefits as last year’s participants who said joining MWC in Barcelona brought them visibility, feedback, and, for some, meetings with key players like Rovio. Some even joined the Arab Mobile Challenge just for that.

“Our goal was to participate in the global challenge in Barcelona,”  Maknon said easily.