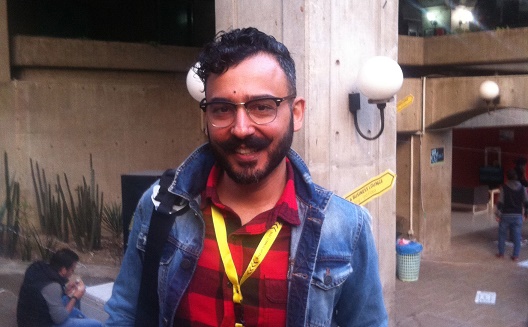 “Nice moustache!” one of the visitors at the Rise Up Summit throws at Mohamed Parham Al Awadhi.

The Emirati entrepreneur and founder of WePress cuts quite an appearance. Jeans jacket, fashionable hairstyle, sleek glasses, and, notably, a distinct moustache.

At one of his appearances at Cairo’s startup summit, he is introduced as a rock star from Dubai, referring to his passion for making music and famous TV appearances.

But it’s his experience in content marketing that are the basis for his latest startup: WePress, an app that connects journalists to a wide range of media and advertising companies.

“What we want to do is to make the whole experience of finding, commissioning and paying professional content creators seamless,” Al Awadhi told Wamda.

That is not where WePress stands yet.

In July he and his cofounder Erbil Sivaslioglu launched phase one, a directory for journalists worldwide.

“It is a directory for collaborating, for subcontracting work, it’s for finding people to work on a job with you,” Al Awadi said, giving a real-life example of a WePress search, where a journalist typed in the keywords Syria, videographer and refugee.

“[The journalist] got a list of videographers with that sort of experience, they connected and within a day they completed an assignment together. Unless you have a great professional network that is very difficult to do.” 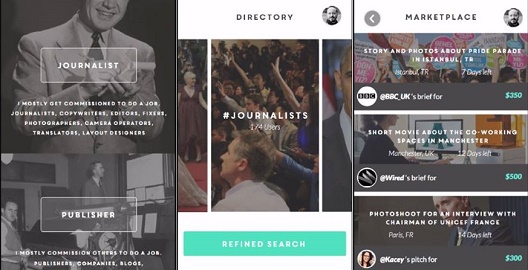 According to Al Awadhi, WePress will hit 1,000 users in December.

Phase two entails implementing a platform - ‘the marketplace’ - through which “brands, agencies, broadcasters, and publishers” can search for and connect with journalists.

Although there are many platforms worldwide through which freelance journalists and organizations can connect, Al Awadhi does not fear competition.

“By 2020, 50 percent of the US workforce will be freelancing. So there will be a lot of freelance management systems out there, [but] nobody is doing what we do.”

Freelance journalism platforms such as NewsModo in Australia, the global site HackPack, and NewsFixed which was recently acquired by Paydesk, offer services very comparable to WePress.

NewsFixed cofounder Jeremy Walker (below) told Wamda the market for freelance journalism platforms was good on the supply side, but not so good on the commissioning side from publishers. 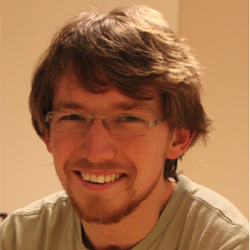 “Sadly there is such a clamour for [work] that freelancers tend to bid one-another down both in terms of rates paid and working conditions, professional relationships, appropriate payment, timeframes etcetera,” he said.

He said the real problem in the industry was not finding people to provide the stories, but payment: the challenge was facilitating payments in a simple way to limit administrative overheads for companies and ensuring secure payment for freelancers in an acceptable timeframe.

“Solve that problem and you’re onto the winning ticket.”

Al Awadhi said he and his co-founder started WePress as a solution for journalists, who face an industry that is increasingly turning to freelancers.

“We looked at this trend in the journalism industry […] We thought how can we create a solution where journalism professionals can continue to report and do what they love, while on the side potentially get some income out of it.”

Besides helping journalists to get work, allowing brands to find professional ‘content creators’ and journalists is the other side of WePress and where Al Awadhi’s background with content marketing comes into play.

“The truth is today brand content - writing, photography, videography - is being done by journalists as well, as a way to earn some extra money,” he said.

This is where the money comes from: WePress aims to generate revenue by charging 10 percent commission on these transactions.

During one of his talks at Rise Up, Al Awadhi said there was more potential to reach customers through branded content marketing than traditional marketing.

To Wamda he implied that WePress offered brands something more in return for the 10 percent commission than just content, but would not detail what those extra benefits were.

It raises the question whether journalism is the means, rather than the goal, of WePress.

When asked, Al Awadhi said: “Maybe”, quickly following with the assurance: “I want to rephrase that. [Journalists] wouldn’t be working for us, but [would be] using the platform.”

A pitfall for WePress could be that there is simply not a strong need for such a platform, as the journalism industry typically relies on networks, personal relations and contact between parties.

“It is very tough to enter the industry. We are a kind of an opening of new opportunities.”

For more experienced journalists, Al Awadhi sees WePress as “a way to build further on your network”.

Also, he highlights the simplicity of WePress, and the assurance of getting paid.

“Time will show that we are a better alternative. It goes back to the seamless workflow, to making it so convenient that you don’t want to go back. It’s about making you more secure about getting your money through WePress, versus trying to get it yourself from the buyer.”