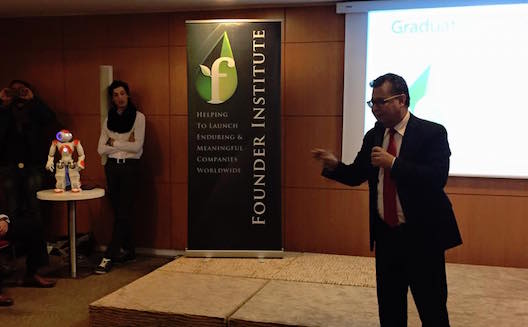 The Silicon Valley-based training program for entrepreneurs around the world was recently launched in Tunis.

For the seven graduating entrepreneurs this was an occasion at which to garner the support of the ecosystem, for the Founder Institute, it was to show their results.

Amongst the guests seeing the first graduates was Tunisia’s Minister for Technology of Information and Communication, Nooman Fehri.

A military-style bootcamp for entrepreneurs

Twenty-five candidates joined the program in November 2015, after a personality-based selection process.

“We don’t base [our choice] on the idea but rather on why they want to be entrepreneurs,” explained Emna Ghariani, general manager of the Founder Institute Tunisia.

The selection team relied on psycho-technical tests to assess whether the applicants had entrepreneurship in their DNA.

Participants, aged 20 to 46-years-old, all in full-time employment or studying otherwise, had diverse profiles: some were researchers, other from the manufacturing sector, one was even a doctor.

On graduation day though, only seven presented their startups. The rest were either not selected to continue or chose not to finish the program, explained Ghariani. On average, the program gets a 60 percent dropout rate around the world.

“The program is intense, it’s the military school of entrepreneurship,” explained the GM who’s known for her strong talk and tough love.

For nearly four months participants followed a curriculum developed by the Founder Institute in the Silicon Valley.

They met once a week, had homework, and benefited from advice of international and local mentors such as Jeff Bonforte, a VP from Yahoo!, Mondher Khanfir from Wiki Start Up, Mouna Ayari from Intilaq and Adel Beznine from Boost Accelerator.

Every month, entrepreneurs had to present their project in front of a dozen of mentors in charge of deciding whether or not the student had what it takes to continue the adventure.

Leaving the program is not a failure, Ghariani insisted.

“Some realized they weren’t made for this, it wasn’t for them at that time, or their idea didn’t work out,” she added. However, participants who did not finish the program are able resume it in any Founder Institute in the world. 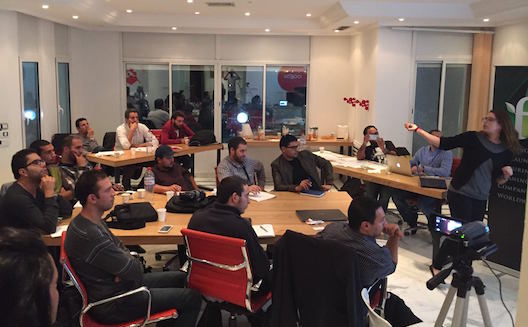 A Founder Institute session at Cogite.

According to Ghariani it doesn’t matter where you’re doing the program, entrepreneurs are the same everywhere. They all have the same things to work on - their pitch, their revenue model, their ability to run a lean business, and customer development.

“Their level isn’t far from that of Silicon Valley, at this stage,” she said (she has also worked there).

Still, they had to work on soft skills. Tunisian entrepreneurs need to learn how to leverage their resources, how to use their network, and get the most from their mentors, she added.

“In Tunisia, there’s a ego problem. We worked on that,” she continued. Next year, she will advise participants not to talk to media during their participation in the program, arguing that they’re not ready and that being in the press may go to their head.

No fundraising during this graduation day

Startups are not ready to raise funds either, Ghariani added. They barely got their MVP out and gathered their first letters of intent from potential clients.

“Founders need more than money, they need the support of the ecosystem, media, […] investors, etcetera,” explained Ghariani. And it seems to be working. Evertek CEO announced that they will try to pre-install all founders' apps on the 500,000 smartphones they will release on their market.

This graduation ceremony was also important for the Founder Institute as they hoped to prove to the ministry, the investors, the tech companies and the other players of the ecosystem that their model had worked.

“People didn’t believe [aspiring entrepreneurs] would pay knowing that 60 percent of them wouldn’t finish the program,” she said.

Founders Institute doesn’t offer capital. Instead, entrepreneurs pay a $475 fee – mostly to prove their commitment – and give up 3.5 percent equity in their company.

Applications are open for the next session.