The fourth quarter 2019 top five venture capital (VC) deals that were disclosed amounted to $78.7 million, with UAE-based Trukker accounting for $23 million of that. 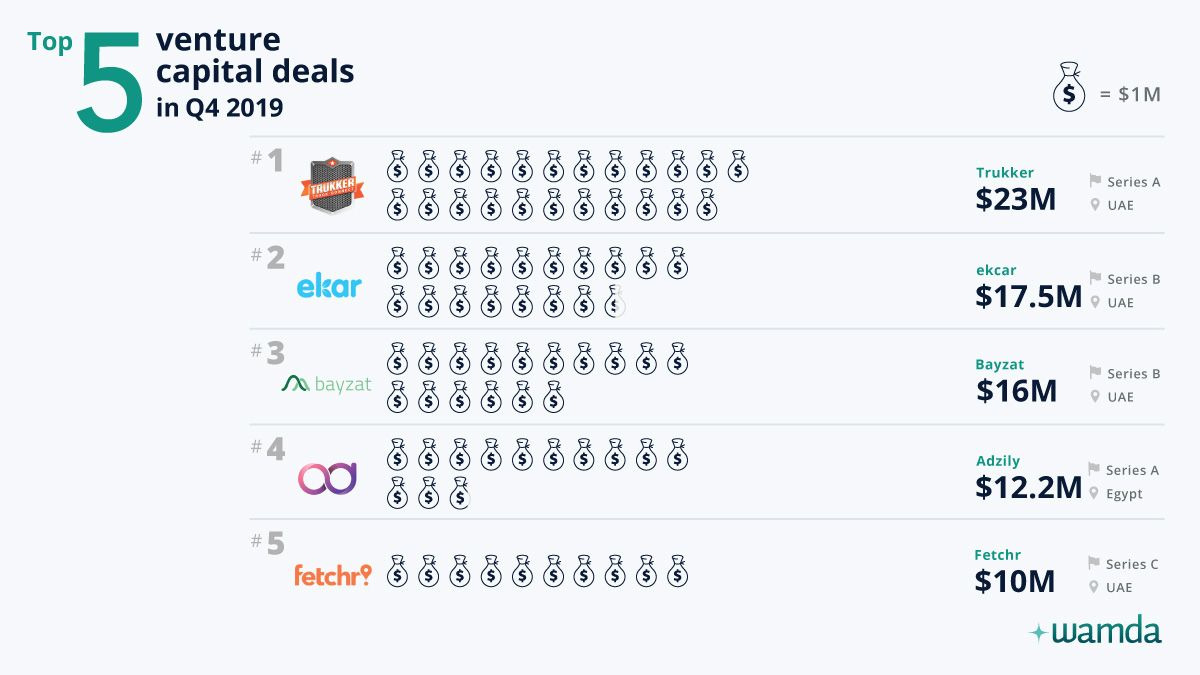 The Company will use the funding to grow the team, enhance customer experience and strengthen its operating infrastructure across the road freight network in the region. Trukker is operational in Saudi Arabia, UAE, and the rest of the GCC and is in the process of expanding to Egypt, Jordan and the wider Middle East region.

Carshare startup, ekar closed a $17.5 million Series B round led by Polymath Ventures with participation from Al Yemni Group and Audacia Capital.

The UAE-based company will now launch operations in Riyadh, Saudi Arabia with 600 ekars and will launch in other cities throughout Saudi including Dammam, Jeddah, Mecca, Medina, and King Abdullah Economic City.

UAE-based human resources and insurance startup Bayzat raised $16 million in a Series B round from Mubadala’s newly launched fund for Mena, US-based Point72 Ventures, and some other regional and global investors.

The round takes total capital raised so far by Bayzat to $31 million. Founded in 2013 by Talal Bayaa, Bayzat provides HR and insurance solutions to SMEs and startups. Its cloud-based HR platform (Bayzat Benefits) helps companies automate their HR administration, payroll processing, and health insurance. It was one of the first companies to set up operations in Abu Dhabi’s Hub71.

Egypt-based indoor advertising platform Adzily raised $12.2 million from Al-Tharawat Private Investment Holding Company. It is the first external investment round raised by Adzily and one of the largest-ever raised by an Egyptian startup.

Founded in 2018, Adzily is a network of digital ad screens spread across cafes, restaurants, and gyms.

Courier app Fetchr, once one of the Middle East’s largest startups, raised as much as $10 million in emergency funding to help avoid collapse. The UAE-based company, which offers delivery and logistics services to e-commerce firms, is also in the process of securing as much as $25 million in additional funding to turn the company around, according to people with knowledge of the matter.

Existing Fetchr investors, who had put up more than $50 million since the company was founded in 2012, will see the value of their shares diluted to almost zero.

It was the first and second quarters of 2019 that provided the top startup investments in 2019, below are the top five of the year.

The round was led by a US-based family investment fund KCK Group and eight other investors including Exor Seeds which counts Ferrari and The Economist in its portfolio of companies.

The UAE-based e-commerce platform AWOK.com raised $30 million in a round jointly led by StonePine ACE Partners out of its StonePine ACE Fund and Al Faisaliah Ventures.

Jordan-based Mawdoo3, an online Arabic content publisher, secured $10 million in May 2019. The startup had secured an initial closing of $13.5 Million in July 2018, closing its series B with a total of $23.5 million. The investment came from UK-based Kingsway Capital, US & Egypt-based Endure Capital, Endeavor Catalyst, Choueiri group’s investment arm Equitrust, and Jordan-based AdamTech Ventures.