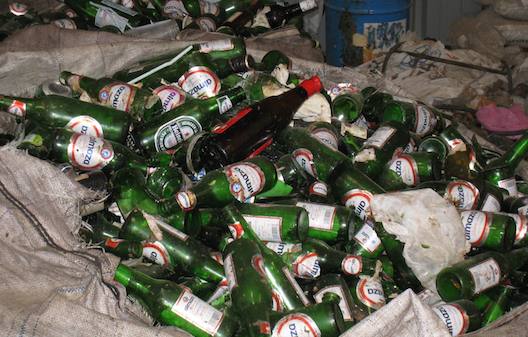 Green Almaza bottles waiting to be reincarnated. (Images via GGRIL)

The Israeli bombardment of Lebanon in 2006 left significant damage to the country’s infrastructure, totalling approximately $3.6 billion. Amongst the various factory and warehouse casualties was the Maliban recycling factory, in the east of Lebanon. It was the only factory to be handling green, amber, and clear glass recycling. When the government was unable to provide compensation to the foreign owner they decided not to restore the facility, and the result was an overload in glass bottles making their way to landfill. 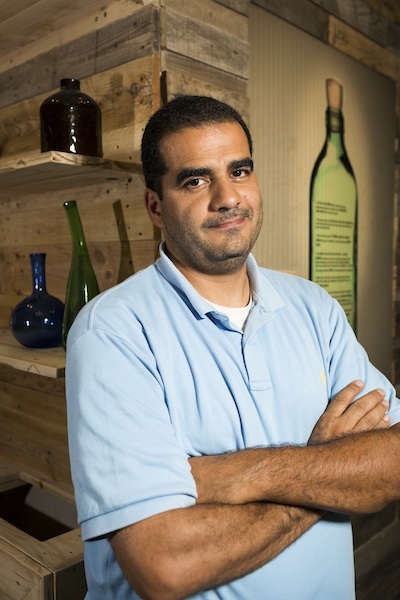 Founded in 2013, Ziad Abi Chaker’s Green Glass Recycling Initiative Lebanon (GGRIL) has taken the surplus glass and turned them into stylish and affordable lamps, glasses, and vases. A successful CSR project, the company is well on its way to expanding their glass blowing infrastructure and creating points of sale around the world.

Wamda: How did GGRIL come about?

Abi Chaker: Cedar Environmental is a research and development facility working to create environmental technologies to deal with solid waste, and GGRIL is a corporate social responsibility project for us. We had seen that the last six glassblowers in the country were going out of business (all members of one family in Sarafand, south Lebanon). GGRIL is one way to alleviate the recycling need for green glass and provide jobs.

Wamda: Why was there a surplus of glass?

Abi Chaker: The Maliban factory was never replaced. The foreign company that owned it were not compensated by the government for their loss and to rebuild would have been about $40 million investment. So, it wasn’t worth it for them. From that point on the bottles grew in number.

Wamda: Why is amber and green glass problematic for recycling?

Abi Chaker: Simply because they’re so abundant. There's already one plant that can process clear class, so we decided to focus on amber and green. We were stocking green glass since 2006 and we eventually had 80 tonnes. When you think about the beer and wine industry [with its many colored glass bottles], when those bottles aren’t being recycled they’re ending up in landfill. 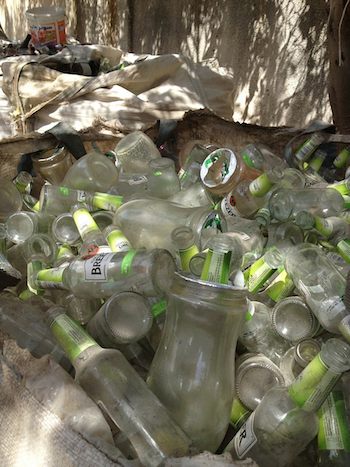 Wamda: What kind of numbers are we talking about here?

Abi Chaker: According to data we got from Almaza [the largest beer company in Lebanon], and the Syndicate of Supermarket Owners, about 71 million bottles a year are being thrown away.

Wamda: What position do you find yourself in now in terms of capacity?

Abi Chaker: We can now recycle all of the green glass. In 2014 we recycled about 200 tons for GGRIL; that’s about 650,000 bottles. We’ve also just signed a deal with Almaza where we’ll be offering up hand-blown glasses with packs of beer. We believe such a deal is promoting the idea that there is a huge market for green glass manufacturing. For any company producing green glass they can see there are instantly two customers for them in Lebanon: Almaza and wine makers. Collectively those two alone are going through about 10 million bottles a year.

Wamda: You ran a crowdfunding campaign in 2014. How did it go?

Abi Chaker: Through Indiegogo we were looking to raise $30,000 for the purchase of a truck for distribution of the glass products created. In the end we raised $12,000 online and $18,000 offline. For the moment we don’t need to do anymore fundraising and actually for us it was a last resort.

Wamda: Has there been any help from the government?

Abi Chaker: No, but we haven't asked for any either. Certainly they do need to promote the idea to investors and build a green glass recycling plant. Obviously though, it is a hefty investment and the political situation is not very helpful these days. 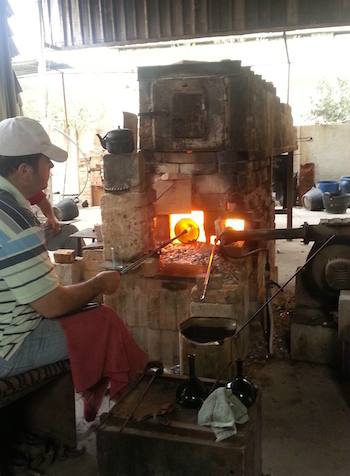 Wamda: What difference has GGRIL made to the Sarafand glassblowers?

Abi Chaker: Two years ago they were on the brink of bankruptcy, now they are looking to expand. For the time being the infrastructure they have set up can handle things, but if things continue to grow they'll need more. They are also now making a profit.

Wamda: Do you think it’s possible to monetize a green startup or social project?

Abi Chaker: If it’s not profitable it’s not going to sustain itself. It’s a matter of making prices reasonable. That’s why the project did so well straight away. We did not want anything, no profit for Cedar Environmental. It was affordable and people liked the designs. Simple as that.

Wamda: What is next for GGRIL?

Abi Chaker: We are looking for more points of sale. We just added another last week in Lebanon.