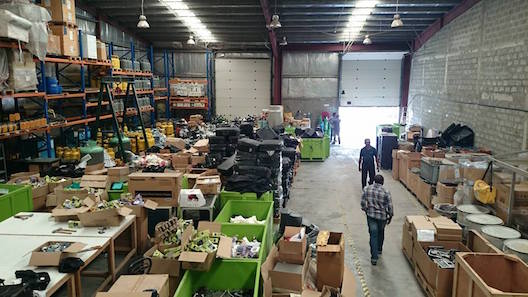 The UAE has one of the highest per capita waste generation rates in the world. Putting this statement into numbers, the average UAE resident produces approximately 3,150 kg of refuse annually. Compare that statistic to Europe, for instance, and that’s six times the amount generated by the average French resident.

And it’s not doing the economy any favors. With an estimated 75 percent of waste ending up in landfill, Abu Dhabi’s Centre of Waste Management has revealed that the UAE loses 1.5 billion dirhams a year (over $400 million) due to landfilling items that could otherwise be recycled into useful products.

Needless to say, recycling continues to be a relatively underused resource in the country, but it is slowly improving with the help of a number of organizations, including Emirates Environmental Group; Zenath Paper; and Envirofone.

But for 29-year-old UAE resident Diya Khalil, connecting local communities with recycling organizations or initiatives was not happening fast enough, so he took matters into his own hands, and the private recycling transportation service, Green Truck was born.

“I’m very passionate about social and community work, so I started Green Truck as private recycling transportation service, bridging the gap between members of the community who wish to recycle but were previously unable to, and with the local recycling industry,” he tells Wamda.

Khalil says he came up with the idea in 2009 while working on the Recycling for Charity project, where he and his team set up recycling centers around town, helped companies set up their own recycling programs, and donated monetary gains to charity.

“Unfortunately, because of the lack of time and resources, I was not able to grow the program, so instead I started to think of how to start a recycling program that is self-sufficient.” 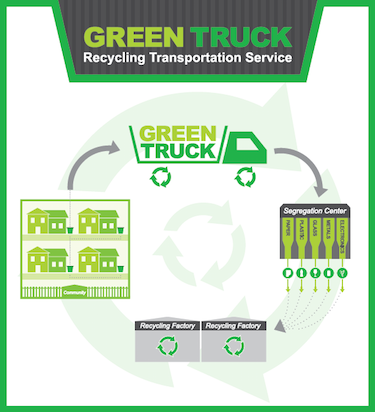 Green Truck works by individuals or workplaces signing up for a package, after which they receive a bin for their waste. The subscription price for  individual residents, for example, starts from 100 dirhams ($27) per month. An office service, meanwhile, starts from 150 dirhams ($41) for a weekly pick-up. The company collects all types of products, including paper, plastics, glass, metal cans, and even unwanted electronics.

Considering the average UAE household throws away 13,000 separate pieces of paper each year – enough to heat 50,000,000 homes for 20 years – there’s no doubt that Khalil is contributing significantly towards social change.

But with only him and a partner, Timothy Paul, running it, how do they manage it all?

“Our manual labor is outsourced,” the cofounder explains. “Waste management is a volume business, and as a private recycling service, naturally I have a relatively low number of clients spread all over the city. To keep the overheads and initial investments low, I partnered with Enviroserve, an existing electronics recycling company that kindly allowed me to share their legal status and resources.”

While Khalil lists his main challenges as finding the set-up costs, as well as marketing the product effectively on little budget, Green Truck received investment through their win at 2014's Acumen for Social Enterprise Business Plan Competition.

“Initial seed funding was provided by Venture 7 Capital after winning that contest,” he continues.

A year on, and Khalil is now keen to widen Green Truck’s service route, along with introducing a new collection truck that runs on 100 percent locally produced biodiesel.

“We’re expanding to include Dubai Media City and Dubai International Financial Centre,” he concludes. “In five years' time, we want to be a waste management company that provides services to whole residential and commercial communities on a B2B bases instead of only B2C, with core services based around recycling.”