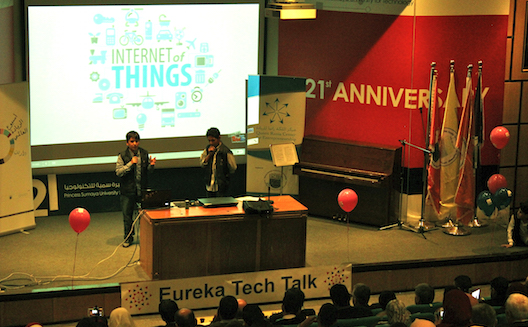 Like many countries in the Middle East and North Africa, Jordan is banking on a youth-led entrepreneurial movement to help launch its economy into a new era.

But when it comes to training the next generation of tech innovators to lead that movement, educational services are behind the learning curve.

At least that’s what the people behind Jordan’s Eureka Tech Academy think, and they’re trying to change that.

“A lot of initiatives are there to support the youth after the age of 18, which is when they enter universities,” said Eureka’s operations officer Hala Jasser Jaghbeer. “What we believe should be done is grow these things into them and instill them at a young age.”

Eureka put that belief on display on November 19, at Princess Sumaya University for Technology, when it hosted a “Tech Talk” event aimed at children interested in tech and engineering.

As part of Global Entrepreneurship Week, the event attracted enough children, teens, and their families to fill PSUT’s auditorium to capacity. There they experienced a lineup of tech experts addressing topics like robotics, 3D printing, the Internet of Things, and more.

Despite complex subject matter, the youngsters listened with rapt attention to presentations customized to appeal to a young audience.

And adapting tech education to attract children and teens is how Eureka hopes to nurture a new generation of innovators who are ahead of the learning curve in MENA.

Many of today’s tech entrepreneurs in Jordan and MENA weren’t formally introduced to the subject or trained until they attended university. By fostering an interest in tech and entrepreneurship beginning at the primary level, Eureka says it’s breaking new ground.

“Eureka Tech Academy is the first academy in Jordan and the MENA region specializing in tech education for kids,” said Eureka founder and general manager Afnan Ali.  “We want students to love technology and entrepreneurship.” 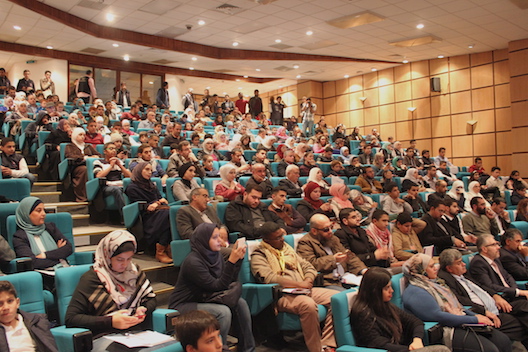 The crowd at the Eureka Tech Talk, at Princess Sumaya University for Technology, watches a presentation.

Even though events like the Tech Talk are similar to the regularly occurring industry training events for entrepreneurs and university students, Eureka’s approach had to be different.

Topics were complex and cutting-edge, but speakers kept their presentations short and fun - presumably to account for adolescent attention spans.

Unlike most entrepreneur training programs, Eureka does not run intensive tech bootcamps with overly technical subject matter. Most school children would presumably be horrified - or bored - by such an experience.

Eureka, according to Ali, aims to make learning about tech and innovation a fun and inclusive affair.

The goal of Eureka, according to its website, is “to develop the innovative capabilities of children in the areas of technology and engineering. Eureka teaches children the basic concepts of engineering and invention so they can transform ideas to useful products.”

It does this by offering courses across 10 different age levels, giving participants hands-on experience with various tech and engineering fields. Each level of the program is three months long and requires two hours of class time per week.

Some of the topics addressed are robotics, electrical engineering, controls systems and smart houses, renewable energy, and mobile app planning.

As participants advance through the program, Eureka also helps students showcase their newfound skills for a large audience through things like its series of Tech Talks.

At the end of the November 19 event, which was the second in the series, Eureka honored the first group of program students to graduate from their level.

Ages 11 to 16, the graduates have the distinction of being members of Jordan’s recently established national tech team.

Conceived and organized by Eureka along with Zain, the national team hopes to compete in international tech competitions against university students and vetted entrepreneurs.

It may sound daunting, but it’s all part of Eureka’s mission of creating a new benchmark for youth tech and engineering education.

“They’re going to graduate, our students, from Eureka, at the age of 16, and they’re going to have a level of knowledge of a college or university graduate,” says Jasser Jaghbeer.