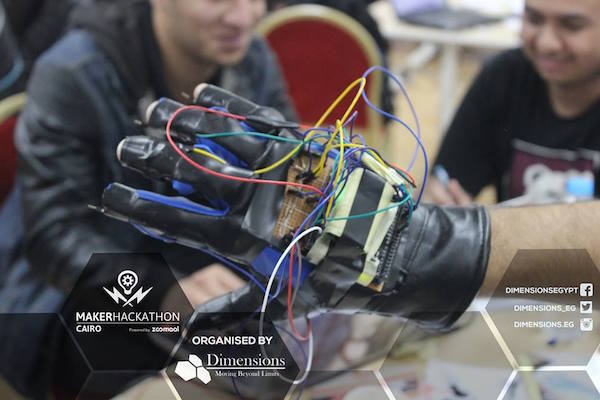 Prolimb, the winning project, picks up nerve impulses to help the wearer move his or her fingers. (Images via Makers Hackathon)

Entrepreneurship in the MENA region is witnessing an unprecedented surge as governments and private sector players mobilize their efforts to support startups, SMEs and innovative ideas.

In Egypt, the Central Bank of Egypt (CBE) is now requiring private institutions to lend at least 200 billion EGP (US$25 billion) to SMEs over the next four years as a stimulus for the country’s 350,000 small businesses. Furthermore, the CBE is requiring banks to increase lending to SMEs at a reduced interest rate 5 percent.

As for the private sector, companies in the communication and tech field are showing increasing interest in innovative ideas and startups that use technology and cloud services to address societal needs.

Indeed, 65 percent of Egypt’s SMEs are in the tech and telecommunications field, according to the book Entrepreneurship in Egypt: From Revolution To Evolution, published in 2015.

Entrepreneurship events, such as Riseup Egypt and Cairo Innovates, put startups, ideas and innovative projects under the spotlight.

Contests organized by government organizations in cooperation with the private sector aim to filter innovative ideas and graduation projects, and support their entrepreneurs with cash prizes, mentoring and incubation. Two such contests took place in Cairo recently.

In its attempts to support tech startup ideas, the Technology Innovation and Entrepreneurship Center (TIEC) announced a number of winning projects during the fourth edition of the ibTIECar competition.

This annual contest is dedicated to graduation projects from telecommunication and technology faculties across Egypt’s universities.

"Students apply on our official website, submitting their project idea in a report including the phone number of the supervisor of the project at their University, and then a TIEC committee filters the ideas submitted,” said Dalia Gamal, innovation support department manager.

Nearly 30 universities submitted 144 ideas in this year's competition, and 21 ideas received awards. They were judged according to the value of the product, clarity in customer base, profit model, and the team behind it.

The ibTIECar competition included categories such as integrated circuits, cloud computing, and social media and mobile applications. Each category was sponsored by an international company or a national organization.

"Each sponsoring company provides a minimum of one prize and a maximum of three, depending on the number of teams that are on the track that serves its objectives,”Gamal said. “The prizes vary between [$400] to [$640] to [$1,200], while some companies support the teams by providing them with hardware and equipment needed for advanced teams."

The prizes granted this year reached $16,600, and the winning teams were given the opportunity to be mentored at one of the branches of the Innovation Center in Cairo, Alexandria, Asyut or Mansoura.

TIEC also gave the winning teams the opportunity to participate in a three-month accelerator program for free, while prioritizing them when it comes to acquiring a working space.

“The two projects that impressed the judging committee without exception were From Arabic Sign Language to Arabic Speech, a mobile application for the deaf that translates sign language into written arabic and vice versa,” Gamal said. “The other project was Rmagine, that translates any book into graphic images without ever being on the device."

Mina Samir, a member of the Arabic sign language team, discussed the process with Wamda.

"We were evaluated in two stages,” he said. “In the first, they made sure our idea falls in one of the tracks mentioned in the competition terms in order for us to explain the idea to the judging panel in no more than 10 minutes during the semi-finals. Then in the second, they announced the names of the winners." 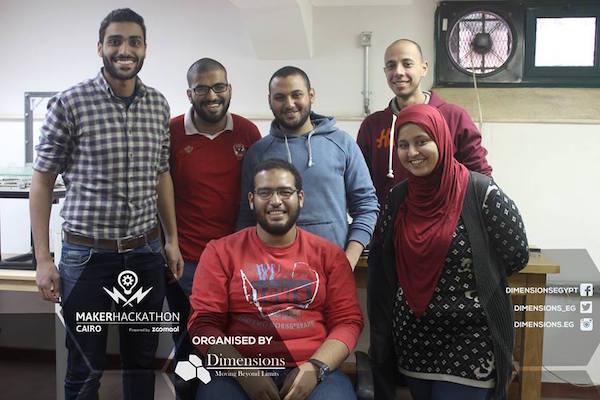 The Pintex team participated in the Maker Hackathon, and designed a device that helps senior citizens and those with special needs to move.

The Maker Hackathon returned to Egypt’s capital for the second year in a row on February 4-6 to support tech ideas with guidance and mentorship.

An idea bootcamp helped entrepreneurs develop their first prototypes and to turn their ideas into potentially successful businesses. About 700 applicants from 120 teams applied for the contest, of which 24 teams were selected for participation, and just 17 reached the final stage.

"We were supposed to choose three finalists for the award ceremony, but we decided to increase the number of winners and of prizes after we realized a great number of ideas was worth supporting because of their originality or the originality of the teams themselves," said Sally Metwally, head of innovation and entrepreneurship at EbniAccelerator and representative of Zoomaal crowdfunding platform for in Egypt.

"We had to choose according to many standards including the grasp of the size of the market, the added value the idea brings, the preciseness of the manufacturing cost, and the efficiency of the prototype," she added.

Ebni awarded the first five teams a two-week incubation period to prepare them for the three-month accelerator program.

The SmartlyFit team received an Intel Galileo board.

Zoomaal granted Flash, Sound Manipulator and SSV, $1000 and $500 and $250 respectively. They also received an AVR chip from Electobekia for recycling electronic waste.

And Pintex and Esha 3almashy won two tickets to London for the Hult Prize's global startup and innovative ideas competition. The Hult Foundation also organizes one of the biggest tech competitions for students worldwide.