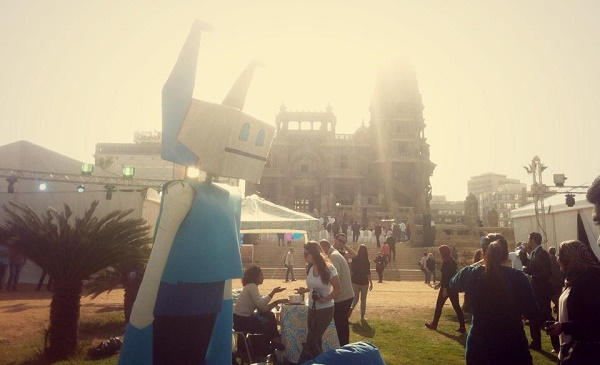 Youth technology fair Cairo Innovates is a place for young inventors and scientists to unveil their ideas, and the second year running proved that Egypt is awash with tech talent.

In line with their vision of supporting tech and innovation, the government-funded Academy of Scientific Research and Technology (ASRT) organized the annual exhibition which is for 18-35 year olds.

The two-day conference took place on November 24-25, in collaboration with Nahdet ElMahrousa, and highlighted more than 500 startups and ideas.

"The main goal is to support the innovation system in Egypt to turn research papers and prototypes into products that boost the industry and the economy," she said. "The exhibition brought together those who are interested in science and innovation in Egypt so they can know the available opportunities they have to continues their path, whether it's research or product related.”

The Egyptian government has allocated $127 million to scientific research in Egypt, and half of this will go to the  Research, Development and Innovation (RDI) Programme.

On the first day of the exhibition the Minister of Scientific Research paid a visit and had personal interviews with a number of young inventors, including Mohammad Abdulrahman, with his prototype that can ‘photograph’ earth layers.

"This can benefit the exploration of tunnels, holes and groundwater, where it can photograph up to 500 meters deep through electric photography," Abdulrahman said of the animated imaging device. 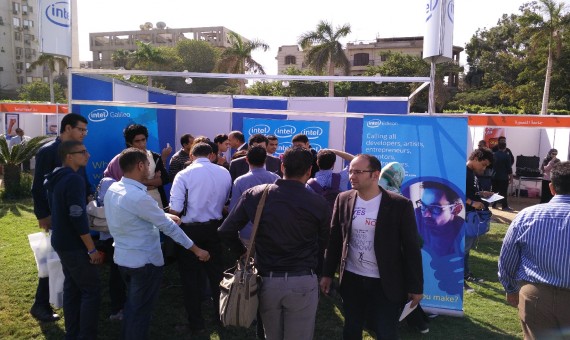 Visitors gather around the Intel tent during the exhibition. (Image via dotmsr)

In health, inventions included a device that aids in the movement of quadriplegics by detecting head movements and a device used for virus-protection by using frequency specific microcurrents (FSM).

In the water sector, two university students exhibited a solar desalinator, and Mohamed Yehya Helali, a researcher at the National Research Institute of Astronomy and Geophysics (NRIAG), submitted a device that generates water from air directly without the use of pipes. The system depends on the cooling of its own aluminum pipes, and uses a condenser to turn the moisture in air into distilled water.

The Green Battery startup exhibited their green battery which converts heat generated from laptops to electric energy that can be reused by the machine.

In agriculture, one innovation was a pesticide sprayer that runs on a 20 watt solar generator, equipped with batteries that enable farmers to use it for up to four hours a night. 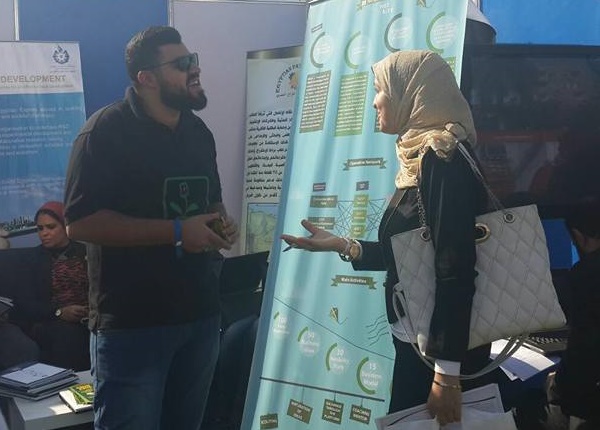 Eqotaqa produces biofuels from recycling animal waste. The company, founded by Mona Alkhudeiri, also produces high-quality fertilizers. Alkhudeiri is an engineering graduate of Assiut University and has provided 140 biogas plants for farmers in one, generating 3,500 cubic meter of biogas. The venture was done with the help of CleanTech Arabia, which supports recycling initiatives.

High school student Ahmad Abbas hoped the Ministry of Scientific Research "adopts my idea of generating electricity in a sustainable manner through the traffic movement of metro trains". He said he’d succeeded in building the prototype but was unable to reach the right people "because of my young age".

The main concern for youth

the young people attending had concerns however, with the main ones being patents and recognition of their inventions.

"The governmental institutions refuse to give them a patent before three years," said student Ahmad Ismail, who invented a device that increases the efficiency of PV cells.

University student Tarek Abdul Aziz said he was worried he’d have to develop his smart trash can outside Egypt because he couldn’t drum up interest within his country, a factor he put down to his age.

Abdul Aziz’s Beetw pressures waste and converts it to energy, and was awarded first prize at the Arab Youth Creativity contest in June.

ASRT funded 30 innovations after the event, using a $19,000 fund. It plans to ultimately support 10 and turn them into industrial versions, in collaboration with the General Authority for Investment (GAFI).

Prizes were also awarded and the winners included a remotely controlled robotic submarine, a micro-turbine that generates energy, and a project for Nile water filtration to produce low-cost clean drinking water for disadvantaged rural areas.

The awards aren’t just superficial recognition, as several of last year's winning inventions are now available in the market.

An automated fire-extinguisher called Ibtikar received $25,000 last year and is now ready to be launched in the market, a remote control for room temperatures at ICU units at a cost of $50,000 is in development in Europe.