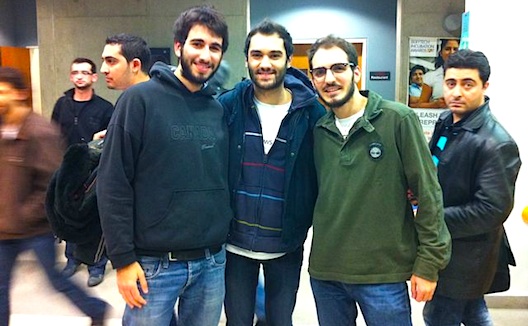 With every startup competition lately seeming to feature iPhone, iPad, Blackberry, and Android apps, watching a series of developers pitch Windows 7.5 apps today at the Microsoft Dev Camp at Berytech in Lebanon seemed novel (at least for this Apple fangirl).

Developers and aspiring entrepreneurs pitched to judges tonight, after two days of furious coding. Some were confident, some nervous, some admitted they’d never coded in Windows 7.5 Mango before, some already had ideas for selling their app, and all seemed to have fun creating new games.

On the first day, attendees soaked up information about the platform through a series of workshops, including one from Berytech and a seminar by Arabnet called “Digital Opportunities,” on trends in the mobile, social media, and gaming space. With a workshop focusing directly on game development principals app, the day seemed geared for gamers.

They then paired off into teams of 2-3 and worked furiously to build apps that they presented to judges in the evening, demonstrating their apps on a sleek, easy-to-view simulator.

Most of the apps presented on the second day were games. Others focused on food, some on map-localized services that allowed you to track your children or search for specific locations in Beirut. A couple were project management ideas, one that incorporated QR codes.

One particularly cool game was Geo Puzzle, which took pictures from your library and chopped them into 9 pieces that you then have to reconstruct in the least number of moves.

Another, Fooctionary, took Pictionary to the crowd, allowing several people to draw at once as others watched the picture develop on their phones and guessed. Judges encouraged multiple rounds to be added, as well as further social integration

The winner, DressBox, blew the judges away with its gorgeous interface. The app allows you to photograph pieces of clothes and try them on virtually, using an avatar of yourself. You can then send different clothing items to friends and share them via social media. While this idea has been discussed and implemented by some others, including e-closet in Jordan, the app’s strength was that trying on the clothes looked useful on its resizable interface.

As investors hovered, DressBox’s team of developers pledged to actually develop the app into a competitive product.

At the end of the competition, all teams were also offered the chance to post their app on the Windows Phone Marketplace through Yalla Apps, a platform designed to accelerate the process of Windows app submission for developers throughout the Middle East and Africa.