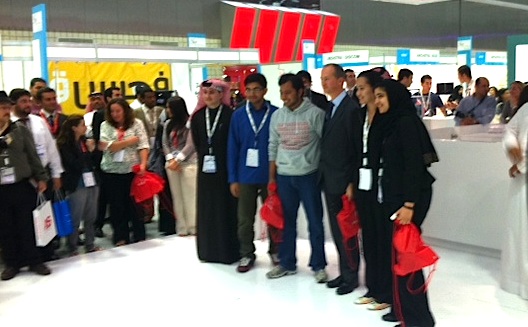 Over the past 48 hours, 13 teams hustled to build working mobile apps during the Appathon hosted by Vodafone Qatar and supported by ictQATAR, at QITCOM, Qatar's IT conference.

The challenge for developers was to produce a mobile app that could be taken to market, in one of four categories: Arabic apps, apps for women, mobile games, and apps for the Al Sadd Fan Club, the Qatari sports club.

While 90 people signed up initially, said Khalifa Saleh Haroon, Vodafone's Head of Innovation and Interactive, only 75 people confirmed, forming 25 teams. On the first day of the conference, 12-13 teams showed up to pitch their initial products, but by the third day only 7 teams had survived. On the final day, one team failed to produce a working prototype, leaving six in the final running.

To determine the winners, judges assessed "the product, potential, creativity, uniqueness, adding a bonus for any apps that support Arabic," said Haroon. All teams won inclusion in Dajtala, ictQATAR's incubator, with second and first places also taking home QAR !0,000 (US$ 2,750) and QAR 40,000 (US$ 11,000) respectively to start their ideas.

A team forming an app to assist drivers navigating traffic in Cairo, and another map-localized app designed to encourage Qatari to get fit did not make the final four.

In fourth place was a shopping app for women, showings customers available offers in malls at particular times.

In third place was Al Saad Fantasy, a fantasy football app that allowing users to form virtual teams using players on the actual Al Sadd football team. Users then compete depending on the players' actual performance.

The runners up were Abtal22, an app designed to bring the World Cup, which Qatar will host in 2022, to kids, through a digital interactive magazine.

The winners were Onigiri, who won with a unanimous decision. Their idea is "Tamagotchi meets mobile apps and social consciousness," said Richard Daly, the CEO of Vodafone Qatar. It was a mobile app designed to educate kids about diabetes, which is a large problem in Qatar, and how it can be prevented or managed by leading a healthy lifestyle. Users play with a diabetic tamagotchi, or digital pet, keeping it healthy by running it through a healthy lifestyle. "It was clear that the team has a fantastic passion for all elements of this product," Daly remarked.

The goal of the event was to encourage developers, said Haroon. "There's a huge focus on entrepreneurship in the region, but at the end of the day in ICT, if there are no developers, there's no product."