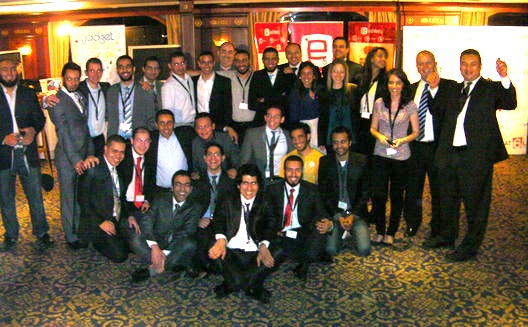 The great and the good of Egypt’s entrepreneurial ecosystem gathered for the showcase of Flat6Labs’ latest clutch of ready-to-grow accelerated companies. The 100+ attendees included investors, media, and other interested parties. They gathered on the 30th April at the “Le Pacha” boat on the Nile, to witness the official end of Flat6Labs’ 2nd cycle.

This “Demo Day” was, on the face of it, very different from the previous one. Attendees were greeted with the pretty faces and good food more associated with a big trade fair. There was also an expectant energy as people mingled, networked and browsed the seven company stalls. Hany Sonbaty, managing partner of Flat6Labs’ parent company Sawari Ventures, admitted to me, “I preferred the intimate nature of our first Demo day (at the Flat6Labs offices).”  This was however tacit acknowledgment that perhaps the previous style did not work as well as hoped, so Flat6Labs were merely following the advice they themselves give, and trying something new to better engage their customers (and investors).

Smaller gatherings may become even more of a relic of the past with Flat6Labs's announcement of a new partnership with the Global Accelerator Network, an international network hosting 37 accelerators that provides portfolio companies with deals, discounts and upgrades. As the network connects Flat6Labs to its peers worldwide, including SeedStartup, the only other member in the Middle East, and well-known U.S. accelerator TechStars, it will provide a powerful launchpad positioning Egypt's tech accelerators on a global stage.

In addition to their ongoing partnership with AUC that includes a series of mobile gaming classes, Flat6Labs also announced a partnership with Wamda; stay tuned for our official announcement.

Crowdsway is a crowd-sourcing platform for video professionals, that promises to democratise the industry; 2ogra aims to bring order to the taxi calling chaos of the region; Eshtery delivers Egypt’s first virtual shopping experience using QR codes and other technologies; Gyrolabs aims to augment the TV experience by bringing the internet into play; Yadget give the socially networked generation a way of tagging places and products; Nafham wants to educate the youngsters left out of by Egypt’s educational system; and asknative provides people with tourist information sourced from the best guides anywhere, i.e., the locals.

The presentations themselves ranged from the nervous to the assured, and the sums asked for went from around 100K LE (~ USD $16,500) to nearly 1 million L.E. (US $165,00). Speaking of numbers, during his presentation, Mohamed Al-Borno, founder of Crowdsway, mixed up his figures up answering a financial question.  This is normally fatal, but Mohamed’s light-hearted manner and honesty seemed to win over the crowd. His presentation was also one of the better ones, but he’s already involved in the media so it had to be!

Did the Demo Day achieve its goal of enticing investors to part with their money? We and Flat6Labs won’t know that just yet, as the investors within the ecosystem are climbing up the learning curve just like the rest of us. But after talking to all the teams about what happens next, they’ve all stated their commitment to grow and make their companies established whether they get investment soon or not. So perhaps the investors will wait and see if the founders can get traction on their own before cheque books are opened. Seeing as the seven companies are at about the same stage of development as the ecosystem itself, maybe that’s the best anyone can hope for at present.