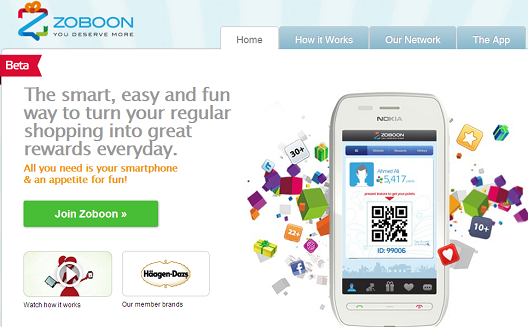 To simplify the process of tracking the various loyalty programs you might sign up for, Zoboon (which means customer in Arabic) manages the entire process by allowing consumers to collect and redeem points across brands through their free downloadable mobile app, acting as a sort of “B2B2C” middle man.

After launching in beta in July of this year, Zoboon’s platform has grown to encompass 22 brands with over 70 branches across Cairo, including Adidas, Levi’s, Quicksilver, Timberland, Alef Bookstores, The Coffee Bean & Tea Leaf, Coffeeshop Company, and Haagen Dazs.

Once users register for free online or on their smartphone, they can accumulate points from purchases, then redeeming their earnings for products, discounts, or prizes (every 100 points earns 1 EGP), or sending them as donations to select charities in Egypt. Users can also follow brands they like, and provide feedback about their store visits.

The more loyal users are, the more points they earn at different status levels:  Blue, Silver, and Gold.

Zoboon has also developed an interactive catalogue to showcase each brand's products, and it allows brands to send customers free gifts through the app, for loyalty or special occasions like birthdays.

Bringing Brands On Board

If the concept of Zoboon sounds familiar, it is. Mobile apps for loyalty programs aren't new- one of the most well-known is ShopKick, a Silicon-Valley based mobile rewards program launched in 2009 that now grants users points for connecting  to their credit cards and even merely entering partner stores.

The fact that Zoboon offers a hybrid donation model also makes it very similar to CareZone, which launched in 2011 to offer consumers the chance to receive same-day awards for their purchases in Dubai, or donate to charities of their choice. After receiving initial accolades for what was a novel model in the Arab world, CareZone folded this year after exhausting the founder's funding; it failed to find an investor to take it to the next level.

CareZone founder Ritesh Tilani confessed difficulties hiring. Thanks to the salary differential though, it's likely simpler to scale in Egypt.

One of the most difficult parts of launching a loyalty program is getting a critical mass of brands on board in the beginning. Loyalty programs face a classic chicken-or-the-egg problem: it takes a lot of ground work to convince brands to join, but a good list of brands is critical for convincing consumers to sign up too.

Zoboon's angle on this issue is a classic- the team approaches brands that don't have a loyalty program and note the opportunity to be closer to customers by promoting their individual products on the mobile app (see screenshots below). Zoboon gives each participating branch an Android device with the capability to scan smartphones to give and redeem points.

Naturally, they also offer analytics and insights for brands, including number of users, average expenditures, and user demographics. “We are like a small ‘Google Analytics’ tool for offline retailers,” says co-founder Mohamed Noweir.

A final feature, for both consumers and businesses, is direct contact with branch managers. Users can send feedback regarding specific products, problems, or suggestions using Zoboon. The message is sent directly to the brand manager, helping brands to be more aware of any complaints or praise, explains Marketing Manager Hazem Biktash.

Zoboon has yet to face any major competition, especially in Egypt, and they seem to have gained first-mover momentum. They take a service fee from merchants for each transaction, yet it's unlikely that they have become profitable within the past 6 months. It will be interesting to see if they can do so and validate the market for loyalty programs in Egypt, while remaining “personal and relevant” (as Noweir puts it) as they expand and test other markets.

See a few screenshots and a preview below. 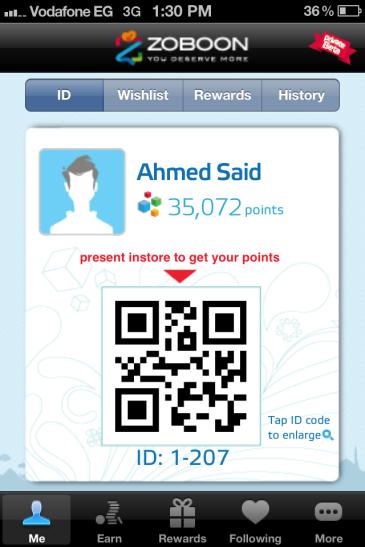 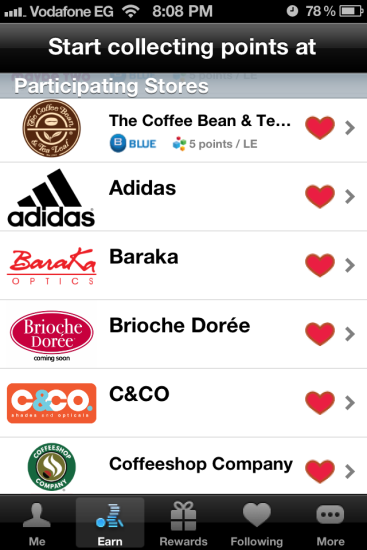