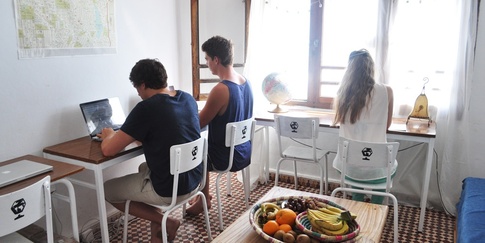 It’s 2013. Fast Internet is accessible almost everywhere, and low cost plane carriers have made travel even easier. So why stay in your country to build your startup?

And why not start in the Arab world? That's the conclusion that Dorothy Sanders, Jonny Miller and Dean Fischer came to when they decided to launch “a living visual Wikipedia of places." After meeting in London while studying economic and geography, the three 20-something Brits decided to launch Maptia, "a platform that makes it easy for individuals to create beautiful maps of their lives and places around them."

Well, at first they didn't start in the Arab world; they went to Chile. Sanders had heard of Startup Chile, a program launched by the Chilean Government to attract world-class early stage entrepreneurs, so she brought the team there. After undergoing incubation, they applied to and joined the TechStars Seattle accelerator program. Yet once they graduated and their temporary U.S. visas expired, they had to re-locate. The question was: where? Where would be affordable and have fast internet?

After ruling out Thailand, Costa Rica and other similar dream destinations, the team decided on Taghazout, a Moroccan surf town. They did so for two reasons: Miller had already lived there over one summer, and at $130, a flight from London was affordable.

Within weeks, the team moved into a cheap apartment only ten meters from the Atlantic ocean and began working. "It's been far better that what we imagined,” says Miller. Not only is the team spending a fraction of what they were spending in Seattle, but with only yoga and cooking as distractions, they're more productive.

Their choice also offered advantages when it came to customer acquisition; living in a tourist village grants the Maptia team a lot of contact with their primary users.

The three founders see Maptia, which hasn't launched yet, as a way for people to record their experiences and inspire others to live life to the full extent. “It will be like a living record of our emotional relationship with places around us,” says Miller. Where better than a surf town to find beta testers? 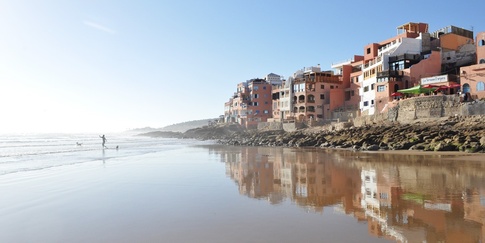 Is it a sustainable model?

When it comes to actually setting up in Morocco, Maptia is not necessarily a model to look to; the company is incorporated in the U.S., ships its electronics from the U.K., and hasn't hired locally or had to engage with bureaucracy in Morocco.

In the future, however, the team will need to hire an extra engineer. They haven’t haven't decided whether to hire locally, but recent buzz has several people contacting the team; now it will be a question of finding the right talent, as it is in any ecosystem.

Networking is another crucial aspect of building a startup that would be tough in a Moroccan surf town; the “soporific pace of life” in Taghazout has been “at odds with [their] usual semi-frantic approach to work and life,” the founders say, and they miss the buzz of the startup scenes they've lived in.

Yet they've tackled that challenge by mostly relying on contacts from the two accelerator programs they completed. With cheap fares, the team can also likely continue to stay in touch with the English and European tech scene, while using their storytelling abilities and unusual location to make a lasting impression in meetings.

Yet eventually, the fantasy will be over and the team will have to relocate to Seattle or the Silicon Valley in July to fundraise, they say; whether they return to the sleepy surf town will depend upon investors' input.

Should you take the leap and move to an emerging market?

Maptia's story reveals the degree to which anyone can build a global product from anywhere these days. Miller reasons that if your team is tied to a location, or if your have to talk to investors in an ongoing manner, or form a variety of new partnerships, it might be harder to move to a remote location, but not impossible.

If Maptia were going regional, or explicitly targeting Morocco, their story might be different; they might consider moving to Casablanca and engaging with the startup scene there, which is growing. The Moroccan government has even taken steps to help entrepreneurs with the administrative aspects of getting set up, while co-working spaces like Insane! are cropping up as well. It’s an encouraging start, as well as a less saturated market, and foreign startups should not underestimate those benefits.