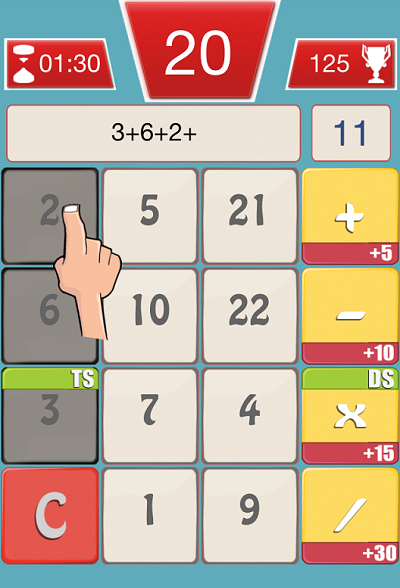 NERDS is a pretty addictive multiplayer game that combines a sharp knowledge of math, quick reflexes, and a competitive spirit to challenge your friends, or previously unknown rivals, to a timed battle of wits. Players are given a set of 11 numbers with which they must add, subtract, multiply, and divide to equal a randomly selected number at the top of the screen within the 1 minute and 30 second time limit.

When I first tried it, I just formed simple problems – 4 x 3, 11 + 1, 18 – 6, - but I quickly realized that, though correct, such combinations really don’t give you much of a high score. Game Cooks cofounder Lebnan Nader quickly recommended combining a whole string of numbers to really rack up the points. So instead of simple combos, I created a new problem: 5 x 3 + 18 – 21 / 2 + 6. Same end result, huge point difference.

As players gain higher scores in the game, they are awarded a new ranking by proving their “nerdiness”, within the game. Players start as a radish, and work their way up the intelligence poll to chicken, baboon, school kid, professor, Einstein, and finally NERD.

As expected, the development team of 3 can play at astounding speeds, trying tons of combinations that most of the time don’t work but, when they do, your opponent doesn’t stand a chance.  It’s simple and has the addictive qualities of other turn-based viral games like Draw Something or Words with Friends, which could definitely help it take off.

The game lets you challenge existing friends on Facebook, or even make new friends through random game matches. Users can choose their own avatars from a range of designs that cost in-game currency, earned by getting a high score or by purchasing more within the app.

It’s a solid games, especially considering the team finished it in only 5 months while working on their other title. They hope that one of the two games, which play very differently, will go viral.

One tool I thought was particularly interesting was their use of in-app purchases. On top of just spending currency to turn off ads, unlocking all of the avatars, or gaining more time to compete, players can also earn in-game currency by following Game Cooks on Twitter, liking them on Facebook, or rating them on the Apple Store or GooglePlay.

It’s a smart strategy, one designed to keep users talking about the game online. And to push their social marketing even further, they’ve even created a comical homemade YouTube video campaign, as they don’t have much of a marketing budget; the founders themselves even dressed up and starred in the video.

While they have a smart in-app purchase strategy, the premium on iOS may hurt their download rate, as popular games with a similar style, like Words with Friends, have always been free. Game Cooks seems to be squeezing out revenue however they can by combining ads, in-app purchases, and a paid model; but it doesn't detract from the gameplay.

Hopefully players will choose to put their math skills to the test; with geeky avatars, themes, and gameplay, the title stays true to its name, making for a truly competitive mobile NERDfest.

Check out their in-house video below: