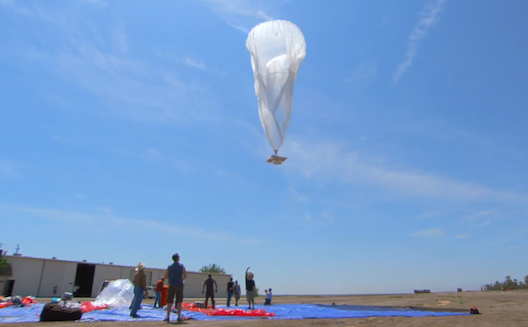 In the Arab world, where internet censorship is the norm, Google’s Project Loon, which aims to provide “balloon-powered internet for everyone,” has been garnering quite a bit of interest lately.

At the Arabnet Digtal Summit in Dubai this past week, Abdullah Hamed of Saudi gaming platform GameTako grilled local Emirati telecom companies Etisalat and du, as well as Saudi’s STC on their responses to the project. Pointing to his tweet on the Twitterfall (below), he asked, essentially, “What will you do when the Google Loon project comes to distribute internet to everyone, independent of telecom companies?”

In Saudi Arabia, where the government recently blocked VoIP service Viber and plans to block Whatsapp, the question is especially pertinent.

The vision for project Loon, which Google announced two weeks ago, is potentially revolutionary: it will use giant balloons to offer internet access at speeds similar to current 3G networks, to the estimated 5 billion people on the planet who can't get online.

The balloons will fly at altitudes twice as high as commercial planes, beaming internet down to special antennas stations on the ground using solar-powered radio transmitters. Each weather-style balloon is designed to provide an area the size of New York City (1,250 square kilometers) with internet.

An early test in New Zealand provided at least one sheep farmer with 15 minutes of internet connection before the balloon floated out of range.

While the Saudi and Emirati telecom companies didn’t have a quick answer, many share Hamed’s opinion in assuming that Google is aiming to become the largest internet service provider (ISP) on the globe. Yet, Google insists, in its video on Loon’s technology (below), its ground stations will be connected to local ISPs, so it will collaborate with local ISPs and telecoms rather than compete with them.

The biggest challenge to Loon, as many have also illustrated, is that it will be subject to the regulations of foreign governments as it spreads across the globe. Not only will it have to negotiate with governments for bands of radio frequencies to use for its local transmissions, it will also have to secure flyover rights in each country its balloons traverse.

If Google doesn’t broker agreements ahead of time, Loon might invoke a less than friendly response from governments that don’t have similar internet freedom laws or don’t appreciate American technology flying in their skies, Jillian York of the Electronic Frontier Foundation points out in a live discussion with Ahmed Shihab-Eldin on HuffPost Live.

To get some clarity on the vision and ambition of Google Loon, Wamda chatted with a source at Google about the scope and future plans of this revolutionary project. Here’s what a Google spokesperson said:

WAMDA: Will Project Loon be limited to certain latitudes until it gains flyover permission from all of the countries in a certain latitude or region? How does Google foresee facing that issue?

GOOGLE: Our goal is to make sure we don't surprise anyone. We're going to start at about the 40th latitude south.  We'll be talking with the relevant authorities in countries where we may be flying over or looking to set up pilot programs e.g. Chile, Argentina, Uruguay, Australia.  There are already thousands of weather balloons launched each year, so there are established processes that we follow with local aviation authorities.

WAMDA: Once it does have flyover permission, is it correct that the project would be dependent upon agreements with local ISPs? Will it ever offer internet access that is independent of local governments?

GOOGLE: Yes, we will connect to the local Internet infrastructure in all countries where we have pilot tests.

One of the reasons we're going public with this project is so we can start getting feedback and start talking to potential partners such as telcos. No one company or technology is going to solve this problem, so we're going to need lots of partners, each of whom knows the situation on the ground in their own country far better than we ever could.

WAMDA: What security measures will be taken to protect the Balloons?

WAMDA: How long does each balloon last, physically?

GOOGLE: Our hope is that ultimately each balloon could last 100 days or more.

WAMDA: How long will the pilot phase in NZ last, and how quickly will the project expand to other regions

GOOGLE: We don't have any detailed timelines to share on the New Zealand pilot the team has just returned home to assess what they've learned from the last couple of weeks, and we expect to head back to NZ later in the year once the weather gets better.  We don't expect to have pilots in other countries before 2014.

WAMDA: What impact does Google see this having on the global population?

Our source at Google didn’t answer this question directly, but it might be best answered by their introductory video: