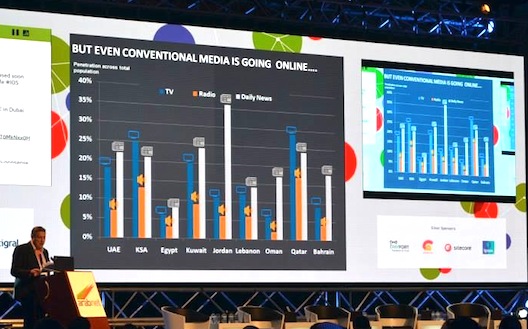 Arabnet’s first Digital Summit in Dubai brought together the startup community and the digital media and marketing industries to hash out the future of the digital space. If the panels, presentations, and corridor conversations are any indication of what's to come, here’s what we should expect.

The panel on the Future of Video felt like a clash between old and new worlds. On one side was Maryse Thomas, founder of Pokeware, which makes content interactive and allows users to purchase items shown onscreen. On the other side was David Butorac, CEO of OSN Network, who doggedly defended the need for pay TV and paid content, saying, “We are all in this business to make money, and someone has to pay the price.”

Yet, tech players like Pokeware are investing in new ways to capture value from content through, while e-commerce companies are expanding further into content; Amazon, for one, has expanded into both content, with Amazon Studios, and hardware, with the Kindle. Across the board, the major players increasingly see e-commerce as the crown jewel, while content is key to its success.

2. Advertising as we know it will disappear.

In the olden days, people sat in their living rooms watching broadcast television and patiently sat through advertisements. Today people download entire TV series in one go and consume it on devices ranging from phones to TV screens, sometimes watching multiple screens at once. Now, being forced to watch a 15-second YouTube ad is almost considered outrageous. Advertising revenues are plummeting, as consumers are always finding ways to avoid them. While advertising remains an important part of the ecosystem today, the industry will have to innovate to survive.

Nowhere was this more apparent than the mobile advertising panel, moderated by Karim Khalifa of Digital Republic. The comments of the panelists were strikingly out of touch with the revolt happening on the Twitterfall behind them. As the panelists impassively described industry obsessions like click-through rate strategies, screen size optimization, and multi-platform campaigns, the Twitterfall erupted into an angry reaction to the very existence of mobile advertising and its annoying and interrupting nature. Some entrepreneurs claimed that they have forgone mobile ad revenues to avoid angering their users.

Other panels highlighted the weakness and difficulty of running a startup on ad revenues alone. This all points to the idea that building awareness and triggering transactions will find new models as we go forward. With the emergence of new models like branded apps and games, high-impact social media campaigns, pokeable video, the banner ad is almost dead.

Arabic is one of the fastest-growing languages on the internet, but only 3-4% of web content is in Arabic. Startups are rapidly starting to fill this void: Oasis 500’s showcase alone included ventures targeting Arabic animation, books, and stationery.

4. The startup ecosystem is poised for rapid growth, but the road will be bumpy.

The startup ecosystem is booming but is still nascent; we’re not out of the woods yet when it comes to major challenges. Rashid AlBallaa of N2V estimated the current available investment in the region at $1 trillion, noting that many investors complain about the lack of quality startups to put their money in. On the other side, startups complain about the lack of “smart money,” meaning investors with useful contacts and industry experience. With few big exits in the region, no one is sure what the model for success is, but some are shifting towards bigger ticket sizes. Yet as startups and investors get closer to determining what works, the ecosystem will likely mature into a fertile environment for startups.

Right now, importing international business models that have been proven elsewhere is a winning formula for both startups and investors. Eventually the balance will shift toward more innovative business models, as the ecosystem matures and gets more comfortable with risk. Established players like Jumeirah Group and Expedia are already encouraging startups to innovate new ways of pushing the industry forward, with augmented reality and image search tailored for hospitality bookings. For now, we can continue to look for innovation in the nuances of how international business models are tweaked and adapted to the local market.