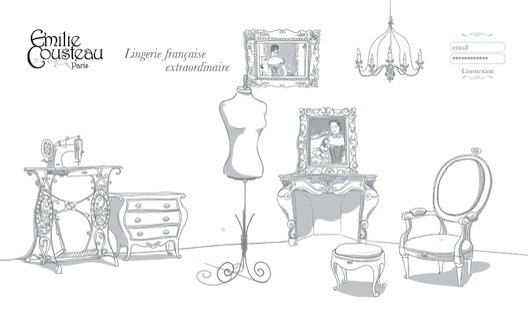 We've recently discussed how some European entrepreneurs have moved to Morocco or Tunisia to cut costs, work in a more relaxed environment, or gain flexibility.

Emilie Cousteau is another European entrepreneur who has come to the Arab world, to launch a business that one might not expect, given that she's the granddaughter of famous oceanic explorer Jacques Cousteau. Following the 2008 financial crisis, she left Dubai, then returning to launch a lingerie business in the Emirates.

Lingerie in the Arab world

While she was working as the purchasing manager at a Saudi lingerie group in 2008, Cousteau came up with the idea to create mid to high-end lingerie, inspired by moments in French history.

In 2009, after she got laid-off, she opened a styling agency in France and launched her first line, simply called Emilie Cousteau. As she initially predicted, many of her clients came not from France, but actually from abroad, especially from Eastern Europe.

Cousteau also knew how promising the Emirati market was; after working in Dubai, she had seen firsthand that the Arab world is the largest consumer of lingerie worldwide. In 2010, she made the leap to selling there through offline and online local outlets; by 2012, she was earning more monthly revenue from sales in Dubai than from France.

Despite the increase in customers, she faced one major drawback: French investors don’t like to invest in markets they don’t know or understand. Without understanding the fiscal rules or the local culture in the Emirates, they were wary of investing in a business doing the majority of its revenue abroad.

In 2012, to secure investment, Emilie Cousteau decided to completely relocate her business to Dubai.

“Stop thinking with a European mindset”

By the time Cousteau moved her headquarters to Dubai, she already had a local network and understood how the market worked. Yet, she says, she fell into some of the pitfalls that most expats fall into, as she learned over time how to adjust to the local business climate. Here are her tips for the European entrepreneurs looking to relocate to the Gulf:

Once you get used to the local culture, you can enjoy its flexibility, says Cousteau.

For example, in France, Cousteau is legally required to pay and employ all of her employees, including herself and any regular freelancer, monthly. In Dubai, however, she has a bit more flexibility; she can forgo her own salary for a month or hire freelancers on an intermittent basis. Dubai offers her one of the most important thing to new business she said: being able to iterate.