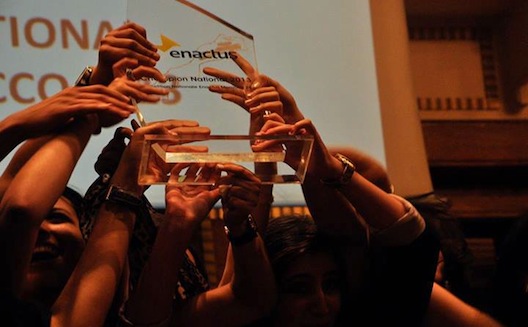 Young social entrepreneurs in Morocco are set to compete on the world stage this fall as the Enactus Morocco competition winner is named.

Enactus, previously known as SIFE (Students in Free Enterprise), has been very active in Morocco over the past ten years, empowering young entrepreneurs to represent their universities on the national circuit by building sustainable projects to better their local communities and Morocco as a whole.

On July 1-2, 26 university teams competed in the national competition, pitching their projects in front of a jury of 120 professionals for the chance to represent Morocco at the Enactus World Cup in Cancun, Mexico this September.

Enactus is an international non-profit organization that supports student entrepreneurship by partnering university teams with academic advisors and business leaders to build their own sustainable projects, from water conservation to programs for the elderly, and building local schools to planting urban gardens. Across the globe, the organization works with inspired young minds to make their world a better place and ultimately make their individual projects self-sustainable.

Across Morocco, Enactus supports 45 separate university teams of around 50 members each; teams can take on several projects at once to spread their impact and find the best initiative for their community. This year alone, Enactus Morocco has supported the development of 136 individual projects.

Although only 26 of these 45 teams could make it to the national competition, the gathering displayed the ingenuity and passion of Morocco’s young talent. The winner of the 2013 competition, the Mohammadia School of Engineers (EMI), now heads to Mexico to face the 36 other country finalists. 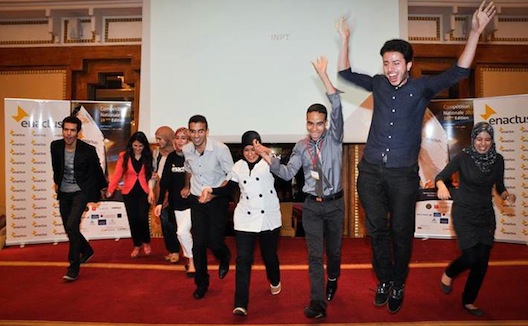 The other 3 finalists also demonstrated the diversity of Enactus-inspired projects; ENCG Kénitra for example created an initiative that helps farmers raise ladybugs to replace pesticides in their fields, while ENSA Safi proposed a device that motorizes regular wheel chairs for just 3,000 DAM (US $355).

Since the Morocco chapter of Enactus began ten years ago, students have managed to create some very high-impact, self-sustainable projects, like Afoulki, a cosmetic co-op that has expanded from employing four women in 2004 to employing 57 in 2013.

And the student entrepreneurs benefit as well, explains Benlafqih. They learn to be more proactive, versatile and to push themselves out of their comfort zones.

But she complains that neither the beneficiaries of the projects nor the student entrepreneurs in Morocco value their entrepreneurial skills as much as they should. Beneficiaries work hand in hand with the students to make their projects sustainable, still they don’t realize that they are themselves entrepreneurs, and that they've achieved valuable results. Students on the other hand often don’t see entrepreneurship as a real career option and will turn to corporate jobs once they graduate.

Benlafqih hopes to convince students to consider entrepreneurship after graduation by showing them that they can make a successful career out of being an entrepreneur. To do so, she works to connect them with local partners and mentors to help them get their ideas off the ground.

At last year’s World Cup, the U.S. won first place, Egypt second, India third, and Zimbabwe fourth. This September, Morocco’s team heads to Cancun alongside projects from Tunisia, Egypt, and others around globe to face off for the title of Enactus World Cup Champion.