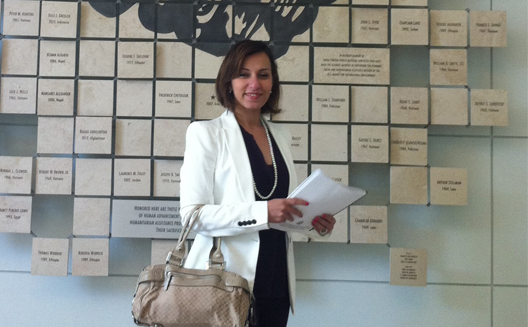 For the first time, Dubai-based equity crowdinvestment platform Eureeca is hosting a campaign launched by an Egyptian entrepreneur.

Noha El-Shazly launched Opendayz in April 2012, as an e-commerce site that helps local fashion businesses sell their products online. After graduating from Egyptian accelerator Tahrir2 this June, she's now looking to raise her next round, a total of $60,000 USD, via a crowdinvesting campaign on Eureeca which launched on November 26th. If she can raise the round in the next two months by selling equity shares for around US $100 each, she'll fund a new marketing campaign and new expansion beyond Egypt.

When she first launched OpenDayz in April 2012, El-Shazly envision a platform that could support women who sell handicrafts out of their homes. The name was inspired by a local event, Open Day, that women would organize offline in order sell products they made or imported from abroad.

Now, El-Shazly and her website have attempted – and largely succeeded – in making every day an Open Day. After Tahrir2 helped the startup build a technical development team and a strong client base, Open Days has grown from hosting 20 stores and 400 products, to 500 stores and 18,000 products, in just over a year.

The simple, intuitive white and orange website offers all of the standard e-commerce functions; users register through Facebook or via e-mail, browse products and stores, and add their favorites to the shopping cart. A team member is always available to answer any questions the buyer might have. A satisfied customer, El-Shazly hopes, will be motivated to repeat the experience again.

In keeping with the site's mission of empowering artisans, big stores are not permitted to sell their wares, so as to give the little ones a chance. Thus far, the website is generating revenue by charging stores an annual fee and taking a 15% commission on products sales. With average of 3,000 unique visitors daily, it's gaining a bit of traction in the Egyptian market.

That growth hasn't come easily in Egypt's current political climate, but El-Shazly does not seem like a woman who is easily discouraged. “Some prefer to stay away from the investment scene, especially entrepreneurial businesses in Egypt which rely on long-term profitability plans,” she says. “However, I decided to change the rules by launching OpenDayz in 2012, in the aftermath of the January revolution. I wanted to help the sector affected by the revolution, and give local businesses in Egypt a chance to offer their products to a larger customer base and meet their needs, without having to leave the comfort [and safety] of their homes.”

In fact, OpenDayz’ “main obstacles,” according to El-Shazly, have not been related to the revolution, but simply those that e-commerce sites face everywhere: logistics. Delivery is currently a challenge given the unsolvable riddles that the region’s addresses  present, as well as the fact that right now, the startup has no central stockroom. To overcome this issue, OpenDayz has “deals with seven different shipping companies to which the system distributes orders according to their past performance.”

Other challenges have included educating a population new to buying and selling online about the benefits of e-commerce. This has included “building a system for cash collection” – currently only cash on delivery – which both buyers and sellers can trust.

While there are similar regional e-commerce sites focusing on handmade and artisanal products (like Ananasa), El-Shazly says that OpenDayz is different because it “doesn’t focus on handmade only, it is just one of our targets. We focus on all small and local business having to do with fashion.”

With the crowdinvesting campaign, El-Shazly seeks to expand her marketing reach to social media channels which, she says, are “some of the most common ways to access consumers nowadays.” She also dreams of crossing borders to other Arab countries, starting with Saudi Arabia and Morocco. “It would be an opportunity to connect those detached from e-commerce to clients all across the region,” she explains, a task she’s already begun to accomplish in Egypt.

While the traditional step for a startup in the West might be to approach institutional capital, form venture capital (VC) firms rather than launch a crowdinvestment campaign, El-Shazly points to the limitations of the regional startup ecosystem. “The number of active VCs is very limited,” she says, while crowd-based financing has taken the region by storm this year. Rather than follow the traditional path, of perhaps limited relevance, El-Shazly’s team “thought to benefit from the power of the crowd.”

Despite the obstacles, El-Shazly has convinced Eureeca of OpenDayz’ viability. Now we’ll see if she can use Eureeca to convince investors to buy equity.