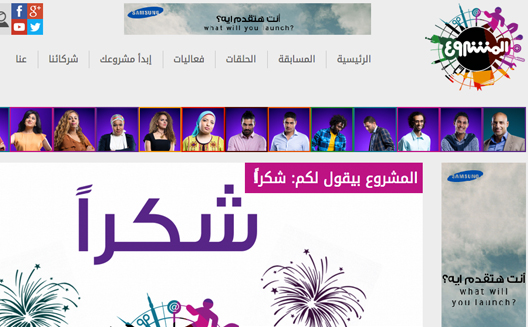 It seems that entrepreneurship has not only impacted the Middle East economically, but in pop culture as well. Egypt recently celebrated the launch of El Mashrou3 (which means ‘the project’ in English), the first reality TV show on entrepreneurship. The show tackles the nature of work in small enterprises, and the patience and perseverance required to meet the challenges to make dreams come true.

El Mashrou3 was officially established in 2013 by the program’s Managing Director Marwa Moaz and David Elliot, the managing director of Bamyan Media, in charge of the program's media marketing.

Prior to the show’s production, Bamyan offered several workshops to entrepreneurs so the administration could become aware the needs of young people interested in entrepreneurship. As a result of these, “we were able to determine [entrepreneurs’] need for legal channels to elaborate their ideas,” says Moaz. “We decided to provide a link between [entrepreneurs and mentors], investors and society as a whole through an entertaining and educational TV show.”

“Youth have only one way out of the economic crisis in our country: to launch their own projects serving society, contributing to solving the unemployment problem and creating for themselves a good place under the sun,” she says.

Nabil didn’t disclose El Mashrou3’s budget, asserting that all figures published in the local press are just speculation and that the team won't discuss the matter.

El Mashrou3 has announced that the show (14 episodes) is ready to be exclusively broadcasted on Alnahar network on Saturdays at 11 PM Egyptian time.

Alnahar is one of El Mashrou3’s sponsors, along with Samsung (supporting an entrepreneurship competition for the first time in its history), and Silatech, which helps small-project entrepreneurs get in touch with investors and encourage personal development.

But, contrary to rumors prevalent in Egypt’s imaginative media, El Mashrou3 is not an Alnahar show. “Our show is a joint production between Alnahar and [our company] Hama Film Production,” Nabil explains. “We were in charge of the production management, the preparation, and the marketing. Alnahar supported us with its advertising campaigns, the way it does for any show it hosts.”

More than 1,000 entrepreneurs hoping to participate in the show took part in the qualifying stages, but the El Mashrou3 competition comprises 14 contestants, representing Egyptian society in all its diversity. Contestants hail from Nubia, Sinai, Cairo, Alexandria, and Upper Egypt.

Some social media users have attack El Mashrou3 for the criteria in choosing the startups participating in the program, including artistic projects like a bride’s theatre and a dancing school. Some consider these projects as purposeless and not serving the society as a whole. Nabil has a different opinion: “diversity is the main rationale behind our choices. We chose an eco-friendly village project and another for alternative energy. We also had to choose artistic ones as they attract a lot of youth. And, at the end, the public will have the last word with their text message votes. This will be one of the ways we’ll get statistics that will influence our selection in the next season.”

The rules of the game state that two teams compete during a series of challenges designed to help contestants learn lessons about entrepreneurship. Every team collaborates, dividing tasks among its members and accomplishing them.

After each challenge, the team who failed to accomplish its challenges has to choose the weakest member of the team to leave the competition. The jury nominates another person to leave.

The jury is composed of Hala Hattab, a mentor with a PhD in Women’s Entrepreneurship who has worked with entrepreneurs in many competitions like Google Start, and Hisham Al Jamal, the founder of Quest for human development who is also a trainer and certified consultant for companies in Europe and Egypt. During each episode, the two judges host a third judge whose skills reflect the challenge taken on by the contestants.

Prizes even for the losers

Each person who leaves the show will receive various prizes to help further their project. These prizes could be cash, electronic devices from Samsung, as well as membership in incubators and accelerators among the many such organizations that have partnered with El Mashrou3, like Injaz Egypt, The GrEEk Campus, RiseUp Egypt, Eventtus, Zoomal, Innoventures, Microsoft and other NGOs that support entrepreneurs through guidance, funding, training, technology, and other necessary tools.

Mostafa Metwally, the first contestant to be voted off the program, received a cash prize of 10,000 EGP, a Galaxy S3, and a laptop from Samsung. He will also receive incubation for six months from The District. In this way, El Mashrou3 makes everybody a winner. According to Nabil, many incubators and investors called the program after the second episode aired to support Metwally’s project.

In the last episode, three contestants will participate in a final challenge. They will receive training sessions on developing a business plan for their projects with the help of two mentors, eventually competing for the big prize at the end. The organizers of El Mashrou3 will follow up on the progress of the winner’s project for a whole year to make sure it’s running well. The two other finalists will win valuable prizes that Nabil is keeping a secret for now.

This is one reality show whose organizers want to make their surroundings a better place. Upcoming episodes, and seasons, will determine if they’re making a difference. Stay tuned to El Mashrou3 – and Wamda – for updates.