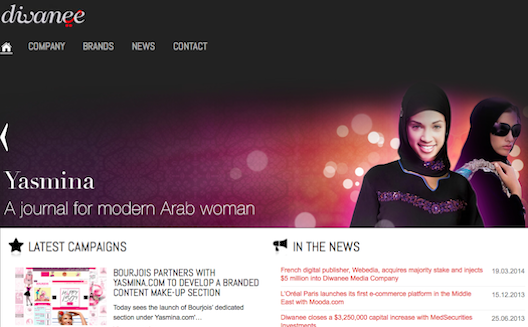 Diwanee, the Dubai-based digital media company, has announced its majority acquisition today by Webedia, a Paris-based digital publishing company. While the terms of the deal are undisclosed, rumors place the valuation at between $20 million and $50 million, making this one of the largest majority investments for a digital company in the Middle East to date.

UPDATE: a source in Lebanon places the company's valuation at around $25 million, estimating that around $12.75 million USD was invested for a 51% equity stake. This makes it one of the largest if not the largest deal done for a digital company in the Lebanese ecosystem, where the majority of the Diwanee team is based. Rumors place Diwanee's valuaton at $17 million at the time of Bank Med's $3.25 million USD private placement deal just nine months ago.

It's a natural fit for Diwanee, which has attracted a predominantly female audience of over 5 million monthly unique visitors on its sites, Yasmina.com, a fashion and beauty portal for women, family-oriented site 3a2ilati.com, recipe site AtyabTabkha.com, entertainment portal Wikeez, and fashion e-commerce site Mooda.com. Webedia also targets a primarily female audience, having attracted over 40 million monthly unique visitors to sites that include glamour and fashion portals Purepeople.com and Puretrend.com.

Webedia will also invest an additional $5 million USD to help Diwanee expand into new verticals, as CEO and cofounder Hervé Cuviliez, his cofounder and wife Delphine Edde, and their team of over 100 employees continue to lead the platform. While Cuviliez would not confirm the new verticals, Webedia's properties, which have a presence ih France, Brazil, Turkey, Germany and Spain, include sites focusing on home and personal lifestyle, as well as reality TV and television entertainment; any of the above could be extended under new brand names to reach an audience in the Middle East.

"Diwanee was at a point where we could do more on the technology side and data side, but it didn’t make financial sense to do it on our own," says Cuviliez, who founded the site with Edde in 2009. "We were very interested in doing this as part of a much larger group. It was a great synergy, and it’s very exciting."

Diwanee, which generates the majority of its revenue from branded content series, will continue to innovate in that space, developing even more sophisticated products, Cuviliez says. Yet, he pledges, Diwanee will continue to focus on what serves the user, and ensure that the content remains educational; branded content pieces typically won't exceed a ratio of 1:20 when compared to regular articles.

When it came to courting acquisition or partnership, one of the biggest advantages that Diwanee had, aside from its traffic and size, was its structure, says Cuviliez. Having an extensive network of freelancers who could provide on-the-ground reporting was important, but so was building out an ad sales team and tech development team in-house.

"We could have taken a shortcut, but our thought was, are we creating value in the long run? We wanted to build a great team in-house, and our investors believed in that vision," he explains.

Commenting on the acquisition in an official statement, Cuviliez stated, “This majority acquisition by Webedia will enable Diwanee to reinforce its position as a leader in the digital media sector in the region as well as fuel innovation and growth  to allow us to continute to provide the highest quality content and state-of-the-art technology and advertising solutions to our clients.”

Guillaume Multrier, co-founder of Webedia, added, “Diwanee has all the elements of a successful player in the digital media space, a solid business model, strong management and a growing market segment. The capital injection is exactly what they needed to realize their potential.  For Webedia, thanks to this operation, we are strengthening our position as a leader among digital media companies and continue with the Group's development internationally."