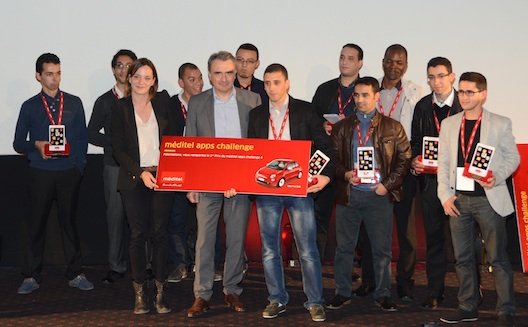 Morocco is a country full of paradoxes. For instance, you can find 3G SIM cards anywhere, at the airport or on the beach, but local apps are almost nonexistent and the country doesn’t even have a dedicated App Store. To help remedy this, four years ago, local telecom company Meditel launched a mobile app competition to encourage young people to develop Morocco-specific apps.

Since its launch, the competition has attracted around 2,400 participants, mostly students. Not all the apps have been excellent but the fact that most participants were first-time developers was a good sign for the development of the Moroccan ecosystem.

This was the case for Yassine Ghazouan, a second year student at Sup Info Casablanca and the developer of Lgardien, a very addictive 2D mobile game. It’s about the adventure of a valet who must collect money from parked cars. It was awarded the Student Prize at this year’s competition.

The young student first heard of the competition during the competition's roadshow in Morocco's university. He explained his decision to take part: “I said to myself, ‘why not participate?’ It was the first time I developed a mobile app and the competition helped me do my research.” The young man liked it so much he has decided to specialize in creating video games.

The Grand Prize was awarded to Rachid Ourich for his app, Hkayat. It allows users to publish jokes from everyday life, as well as read and comment on those of others. Inspired by the French application VDM, it reminds me of Maroc Insolite, a well-known app that has been very successful in Morocco. Ourich wants to continue developing Hkayat and monetizing, hoping one day to make a living from his hobby.

The second-place prize went to two applications developed by professionals. The first is called Daily, developed by Tite Tresor Ngoytha, allowing users to receive news and local cultural calendar on their smartphones. The second one is Bach Nwasl, by Yassine Aboudourib, allowing you to search different bus lines to move more efficiently around town.

This year wasn’t Aboudourib’s first time participating in the competition. In the second edition of the challenge, he was one of the finalists, and Meditel published his app. “When I saw the app I presented during the second edition on the store with lot of downloads and good reviews, it motivated me to develop another one,” he said. According to Aboudourib, the competition had two benefits: it sets a deadline for developers, and provides the possibility of getting the app in the public sphere.

His ambitions are big: “[this app] is the beginning of a big system that I need to develop.” Eventually, he wants to work on partnerships with public transportation companies.

The competition also offered participants a training day called Boost App, during which experts coached more than 50 participants in mobile and applications.

The Boost App event helped many students, like Mehdi, make the first step. “I had a good idea but I didn’t know where to start. I’m attending today to get advice before I start coding.”

As for Hind, another participant, the highlight of this day was to “meet coaches and experts from the mobile world and [...] exchange ideas.”

The ten finalist apps will soon be available on the Google Play Store.

This article was written with the help of Yassine Karmouche, a finalist in the challenge’s second edition who joined the organizing team of the event.