Over the course of two days last month, self-described social media utilization agency The Online Project (TOP) held Cointalks Dubai, an event to discuss the prospect for digital currencies in the region.

It aimed to “educate people, raise awareness, and maybe build a Bitcoin ecosystem in Dubai,” says Feras Hilal, one of the organizers.

The two day event began with talks from two renowned experts on Bitcoin, Juan Llanos, member of the Bitcoin Foundation’s Committee on Regulatory Affairs, and Bruce Fenton, board member of the Bitcoin Association, who introduced the possibilities of Bitcoin and its applications for the world and in the MENA region more specifically, as well as the latest regulatory and legal developments. The first day of the event, held at Dubai's Capital Club, was geared towards finance and legal professionals.

The event’s second day at the Impact Business Hub was geared towards a more general crowd: Bitcoin enthusiasts, technology professionals, entrepreneurs, and marketing and financial professionals.

Before tackling the potential for digital currency in the Middle East, it was important to clear up the many misconceptions surrounding Bitcoin. In a Q&A presentation, Bruce Fenton described Bitcoin as a new and innovative system of finance that relies on codes and computer technology while eliminating third parties. He also said that because it is based on math and open source code, Bitcoin is like a ‘ledger’, or a financial accounts book that anyone can read. He responded to questions of security by asserting that only people and companies who held Bitcoins had ever been hacked; Bitcoin as a currency had never been successfully hacked.

Despite his obvious passion, I thought that Fenton’s presentation wasn’t enough to dissipate all the mystery around the virtual currency. But the organizers were prepared for that; they had scheduled other speakers to provide different perspectives.

Fouad Jeryes, founder of Bitcoin Jordan, explained the currency through facts and figures. He relied on the Coin Desk Q1 2014 report, pointing out that both Wall Street and venture capitalists are taking an increasing interest in Bitcoin. The total VC investment in cryptocurrency startups has reached $98 million USD, according to Jeryes. In addition, more merchants around the world, especially in North America and Europe, are adopting the digital currency. According to the report, their number has reached 60,000, mostly online businesses. 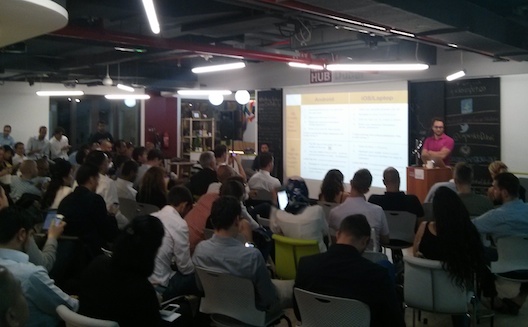 Why Bitcoin matters in the Middle East

The speakers touched on three ways Bitcoin could change the MENA’s relationship with money.

According to the Global Findex, three-fourths of the world’s poor don’t have a bank account, not only because of poverty but also due to costs, travel distances, and paper work. Doudin said that Bitcoin “is introducing a new level of financial integration that never existed before for borrowing, lending, saving and connectivity with the rest of the world.”

Llanos explained that remittances are usually very expensive because of underdeveloped infrastructure, limited competition, and regulatory obstacles. Thus, Bitcoin will help send money from the Global North to the Global South in a “fast, very cheap way, eliminating all intermediaries.”

Remittance flow in the MENA region is the largest in the world, according to Doudin, and it is expected to grow by 5-6% in 2015, rising to $56 billion USD. She also emphasized that about 45% of the total remittances to India comes from the GCC.

By using any of the Bitcoin wallets, people can securely buy, use, and accept Bitcoin currency without any merchant or interchange fees. According to Doudin, Bitcoin would be an alternative to the biggest challenge for e-commerce players in the MENA region: the still-prevalent COD (cash on delivery) method. Bitcoin could be one of the solutions to many COD risks such as lag time before order and payment, the high return rates and the need for delivery people to carry cash.

Many other qualities might make Bitcoin attractive in the region, such as its potential to take advantage of growth in the mobile sector. Llanos stressed “the great opportunity for innovation, leveraging mobile technology.” Also, Bitcoin is a financial system designed for the internet age, as Doudin said. As regional internet adoption increases by leaps and bounds every year, Bitcoin will help people make micro-payments and transactions more easily.

Despite these points in its favor, Bitcoin is almost inexistent in the MENA region. Only two merchants accept Bitcoin in the whole MENA region: a restaurant in Dubai and a coffee shop in Jordan.

But Dubai’s enthusiasm for the new currency might lead the way for the region. Cointalks Dubai attracted a big crowd (of mostly men!) and reflected increasing attention to the digital currency.