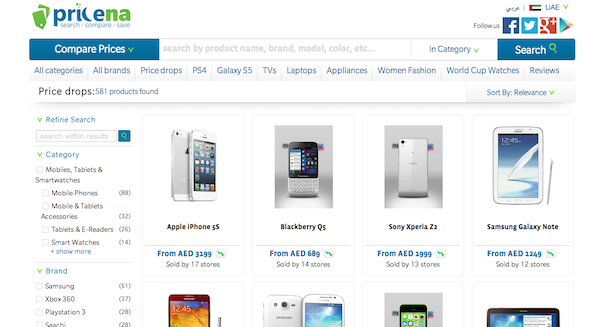 According to experts, e-commerce is the fastest growing sector in the Gulf. For the UAE in particular, they expect its value to reach $10 billion USD by 2018. For the time being though, according to a report by online payment gateway Payfort, e-commerce in the UAE is currently valued at $2.5 billion USD, with more than 3.6 million online shoppers, 60% of whom are located in Dubai.

As part of this move to get more people shopping online, Jordanian entrepreneur Haneen Dabain came up with Pricena. Launched in 2013 in the UAE, the price comparison site, which redirects shoppers to other online stores, started with just 10 stores and has now expanded to 40 stores in the UAE and most recently 10 in Egypt. With 180,000 products and more than 500 categories, it is drawing 180,000 visitors each month.

“Pricena’s algorithm is similar to the one Google uses to also go into websites and compare prices,” explains Dabain. The website operates quasi-automatically, with minimal human intervention: data entry operators upload basic information about stores once and Pricena automatically updates prices of subscribed stores every 24 hours. The team is also working on launching a Pricena mobile app for both iOS and Android by September.

Dabain sees Pricena serving both customer and store in equal measure. “We work towards […] saving time, effort, and money for the former, and providing the latter with an opportunity to market its brand, to be present in a competitive environment.” Dabain believes that when consumers reach the point of comparing prices it means they have already made up their mind about buying the product - Dabain says that this is “the key behind a 6% conversion rate compared to 1% for Google Adwords.”

Pricena is not a novelty though. The venture, which started one year ago after Dabain graduated from Canada’s University of York and moved to Dubai, has recently moved into the Egyptian market. Both UAE and Egypt are, however, already home to price comparison sites such as Meefind, CellSouq, SouqMobi, and Bkam, the latter of which came third in the Vodafone appStar Contest in 2012 and has received investment from Jabbar Internet Group, thus supporting its expansion into the UAE. Pricena are not fazed though. They believe they have an edge on the competition, in making sure problems they see on other sites are not present on theirs. As an example Dabain mentions the lack of focus on other sites who not only offer price comparison but mix it up with travel services.

Moreover, Pricena founders aren’t concerned about pricing disparities which might affect the sales of one store for the benefit of another. “The largest portion of consumers usually look for global brands, trusted stores, distinguished customer service, or quick delivery and shipping services,” says Dabain, “while another significant portion looks for the cheapest prices. In addition, the stores’ sales are balanced on Pricena because we ensure equal visibility for everyone.”

Pricena has three sources of revenue: advertisers (CPM), cost per click (CPC), and cost per acquisition (CPA), i.e. by charging the advertiser with a fee whenever a purchase is done. Pricena trusts Ikoo for digital marketing with the task of billing advertisers. Fees paid by a store in this case usually range between 2 and 10% depending on the product category.

Dabain and her partners believe that Pricena is now mature enough (thanks to its algorithm), allowing it to expand to other countries in the region, which is encouraging them to look for venture capital. And if they get the desired investment, the team is planning to pay more attention to social media marketing to draw in more shoppers.

Learn more about how Pricena operates: