Over the past few years, Wamda has covered a lot of medical startups that provide patients with information on different health topics, such as WebTeb and Altibbi, AUC’s D-Kimia, Sohati, Clinical Fellows, and DrBridge. Since good health won’t be going out of style anytime soon, why should the trend stop here? 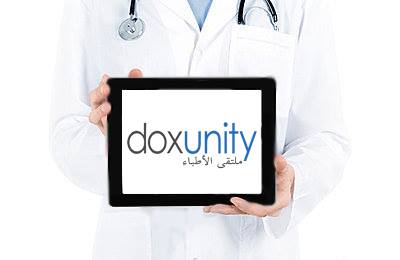 The story of Doxunity, a social network for doctors in the MENA region launched last year, goes back to co-founder Fadi Muhsen’s high school years. In his senior year, Muhsen discovered medicine. “During my last year in high school, there was a unique program for high school students who were interested in medical school,” that replaces the senior year, says Muhsen. “I started interning at private practices. […] We would go to the hospitals and take premedical courses.”

After graduating highschool in 2008, Muhsen met Umair Awan while working for AT&T on the sales team. “We always talked about our future. We started building entrepreneurship skills by getting up early and chasing clients all day,” Muhsen reminisces

During their work together, the two started discussing how to revolutionize the healthcare industry. During their research, they noticed that in markets like the US, China, UK, Russia, Pakistan, Japan, Asia, there are many networks that allow doctors to connect with each other, exchanging knowledge and expertise. Doctors.net, dxy.com, and m3.com are just a few. “The only place that was missing was the Middle East,” says Muhsen.

“The Arab region is really divided: you have the GCC, the Levant. If doctors are united in the MENA, they can produce a better output for their patients,” says the cofounder.

In order to get a general idea about what’s been happening in the Arab region, Muhsen (who was born and raised in DC) flew to Jordan one summer while he was in college to visit an uncle there who worked in the medical field. “We wanted to figure out what the Middle East needed. There was a lot of money but the healthcare industry had been completely ignored.” He spent two and a half months in Jordan then went back to finish college. In August 2013, the cofounders started working on Doxunity (doctors + unity), outsourcing the development work. Once the product was built, they started contacting doctors in the region and talking to regional incubators, accelerators, and other entities to get themselves familiar with the ecosystem there. According to Muhsen, the cofounders approached in5, SeedStars, Oasis500, Sinbad Ventures, iMENA and others, but none of them were able to help with capital or legal work.

In January, they took a serious plunge, moving to Dubai without a work or living space. After they managed to rent a place, they started working from coffee shops and “leaving only when they’d kick us out,” Muhsen recalls jokingly.

Muhsen and Awan didn’t want to just build a platform where doctors can communicate and exchange information. They want to build a bridge between doctors so that those in vulnerable areas like Palestine can benefit from doctors’ expertise in another country, for instance. “You may want to contact a doctor in the UAE who has more expertise,” explains Muhsen.

Verification of credentials is an important aspect of the site’s potential utility. When doctors sign up on Doxunity, they receive a verification form where they provide their medical email address (if applicable) and a copy of their practicing license which will be verified through the website of the UAE Health Authority. “If we don’t get an answer [from the user], we suspend the account until it’s verified,” Muhsen says. 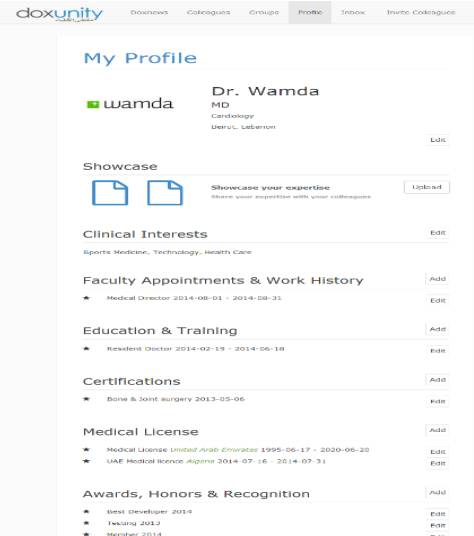 The interaction on the platform is very similar to that of Facebook. Users can share or like the articles they read and search for colleagues by name or country. Soon, the platform will also feature a Q&A section.

Doxunity isn’t monetizing yet, says Muhsen, but it has around 120 active users in Iran, Tunisia, Algeria, Dubai, Qatar, Saudi Arabia, Palestine, and Jordan. Despite the fact that they have so far been struggling without investment, “our focus shouldn’t be to monetize the site; we want to build a sustainable and reliable product then we’ll switch gears,” he says.

However, things are looking up. A recent investment of $60,000 USD from private entrepreneurs based in TECOM has enabled the startup to hire a small team of in-house developers, a small marketing team, and move to an actual office (one that doesn’t only serve coffee).