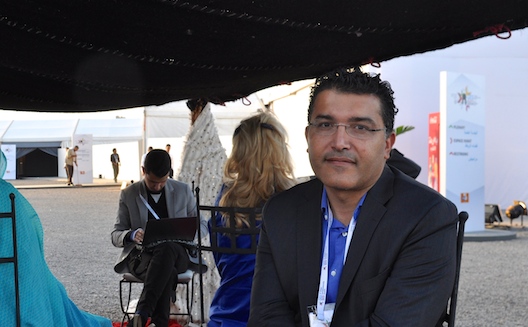 Since we published the testimonial piece of Greendizer co-founder Mohamed Attahri, where he described his less than pleasing experience with the Moroccan Center for Innovation (CMI), the CMI has responded to several questions posed by Wamda.

While numerous beneficiaries of the funding program supported Attahri’s feelings and expressed agreement with the majority of his points, others for clarification of the complaints raised. What if it was in fact all just a lack of understanding the program and professional immaturity on the part of some young entrepreneurs?

So, we asked Samir El Aichaoui, Director General of CMI (pictured above) to answer five of the complaints made against the CMI.

Wamda: Can the CMI be held responsible for the liquidity problems of some beneficiaries?

Aichaoui: The funding tools managed by the Moroccan Center for Innovation have the main goal of helping finance innovative projects launched by startups, and not financing the startups themselves and their need for a working capital or the management of the company’s finances.

This fund was set up to encourage companies that have innovative projects but who are reluctant to carry them out because of the associated risks. For companies with less than two years of activity, contribution to the project financing can reach up to 90%, in amounts as high as one million Moroccan Dirhams (MAD) [Editor’s note: INTILAK program]. For companies that have been on the market for more than two years, participation with the risks is smaller, amounting to 50%, but allows for greater contributions that can reach four million MAD when the project justifies it [Editor’s note: TATWIR program].

In case the project makes it, reimbursement is expected to start after five years, for a period of five years, at a zero percent rate. Otherwise [Editor’s note: this means in case of a failure, which would be validated by external experts], funding takes the form of a grant [Editor’s note: meaning that the company is no longer required to pay back the amount].

Wamda: CMI’s aid takes the form of reimbursement, which does not solve the lack of liquidity problems that entrepreneurs face when funding their innovations. Why is this?

Aichaoui: Companies face a number of constraints and issues, and the funding tools that the CMI offers, unfortunately, cannot solve them all.

The companies’ need for liquidity is undeniable; however, it is not the role of these funding tools to take care of this. In all cases, this is not the purpose these funding instruments were designed for.

Maybe we’ll get to it later, and maybe there’s a need here that the State should listen to. Meanwhile, there are other funding tools which cover other problems, notably economic development, industrialization, and dematerialization.

Wamda: Why is the process so long?

Aichaoui: Entrepreneurs define themselves online. The evaluation [carried out by the CMI] includes the verification of intellectual property, and when the file includes technical complexities, the center resorts to the technical expertise of one of the 120 experts listed at the National Center for Scientific and Technical Research (CNRST). An evaluation and allocation process is then carried out by a committee made up of representatives of the General Confederation of Enterprises of Morocco (CGEM), the National Agency for the Promotion of Small and Medium Enterprises (ANPME), and the Ministry of Industry, Trade, Investment, and Digital Economy.

Following the allocation, project developers are asked to define their needs online in terms of project funding and deliverables associated with the project implementation throughout the different phases. The project structure as defined by the project owner results in a contract which defines the funding terms based on a phase-gate process [Editor’s note: on a phase basis]. The completion of each phase allows access to the funding of the following one. In the INTILAK funding tool, funding is paid in advance for the first three phases.

When conditions are not met, in order to access the following phases, the Evaluation and Allocation Committee can put an end to funding.

Wamda: Why can’t entrepreneurs meet the board themselves?

Aichaoui: The first editions of INTILAK did not include any link between the project owners and the committee. Starting from the second edition, we asked people to post five-minute videos online, and in the fourth edition, we experimented with organizing meetings between project developers and the committee. The committee’s members spent three whole days meeting project owners and we realized that these assessments were not necessarily effective and the operational constraints linked to such a process cancelled the value that was expected out of it.

And so it was decided, starting from the fifth edition, that these meetings would be held with the CMI [Editor’s note: which would in turn pitch the file to the committee]. The Moroccan Center for Innovation assists project owners but does not have a decisive role in the allocation of funds.

Wamda: Did the CMI funding program see other developments since the first editions in which entrepreneurs such as Mohamed Attahri participated?

Aichaoui: Project owners can now set up their projects using a grid that includes innovation criteria as defined by the Innovation Support Fund. The administrative procedures initially intended to provide tax certificates and other papers from the National Social Security Fund, balance sheets certified by the tax authorities for the last two years, and a certificate of tax residency. These documents are now obtained directly from the relevant authorities.

At the administrative file level, a simplification was made. Nearly the majority of administrative documents can now be retrieved from the competent authorities.

In the case of Mohamed Attahri, his company benefitted from a lot of help and funding; however, unfortunately, its leaders have failed. It happens. Entrepreneurship is also made of failure and one should be able to learn from their failures and to criticize themselves in order not to repeat the same mistakes again. Blaming those who have tried to help you is not, in my opinion, the best approach.

Wamda: What funding options do you recommend to companies in need for liquidity?

Aichaoui: There are a number of initiatives that deserve to be encouraged.

The first step would be to achieve harmonization between startups and investors. [Editor’s note: startups should look more attractive to private capitals by proving their economic potential]. It is also important to earn the trust of funding actors such as business angels and to work on what is still holding them back from contributing.

It is essential to democratize micro-payment through online wallets. China’s AppStore for instance, allows for transactions starting $0.13 USD, i.e. the equivalent of 1 MAD, for apps, services, and otherwise. Such payment solutions would allow startups a bigger flexibility in defining their business models and would allow them access to markets that they cannot enter at the moment.