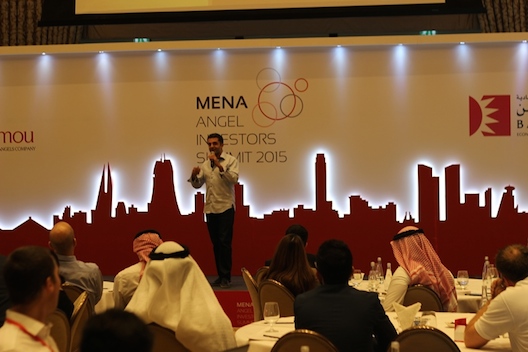 An entrepreneur pitches his augmented reality app to investors. (Images via Tenmou)

An annoyance for the growing startup scene of the Middle East has been the lack of available investors, but more than that, the access to, or knowledge of investors that might love a product.

When Hasan Haider came together with Sami Jalal back in 2011 their creation of Tenmou was a first step, not just for the island of Bahrain, but for the region. Now, at their second annual Angel Investor Summit, they have officially launched a second step, the MENA Angel Investor Network (MAIN).

According to Haider: “There have been significantly more investments taking place, and the number of investors at the summit has doubled.”

There were more than 200 people attending the launch, a mix of startups from across the region, and investors from around the world. Hailing from Bahrain, KSA, UAE, Lebanon, Morocco, Palestine, Egypt, Sudan and Jordan, 45 startups, largely at growth stage, pitched and had one-on-one meetings with investors, over a two-day period. 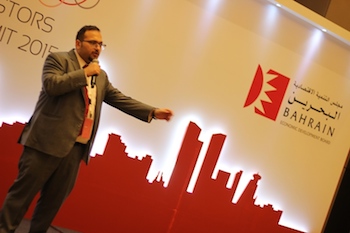 For one of those pitching at the event, the establishment of an investor network was key to filling the gap between seed funding and Series A rounds. Dany El Eid from Dubai’s Pixelbug calls this gap The Valley of Death. “We need more savvy investors to invest in young talent and be more risk prone,” he told Wamda.

Pitching his Colorbug, an augmented reality app for children, El Eid said that generally “Investors prefer to de-risk and invest in tried and tested sectors such as ecommerce and real estate, etc... It's difficult to find true venture capital. Access to investors is relatively easy, it's finding qualified ones that is proving to be more difficult.”

Angel investors from the region included Faris Alrashed of Oqal, and WOMENA's Chantalle Dumonceaux; plus a selection from further afield:Cesar Salazar from 500 Startups; Audra Shallal, an angel investor from France, and Anil Joshi of India’s Mumbai Angels.

“There is shared expertise amongst the members [of a network] that can lead an individual angel to reconsider certain decisions based on insider knowledge,” says WOMENA’s Dumonceaux. “It is on us and those who wish to contribute to economic growth in the region to share these benefits and encourage membership, and on the individual angel investor to join a network!”

“It is a true network being developed by the members themselves, not just me,” Haider told Wamda. “I just brought everyone together.”