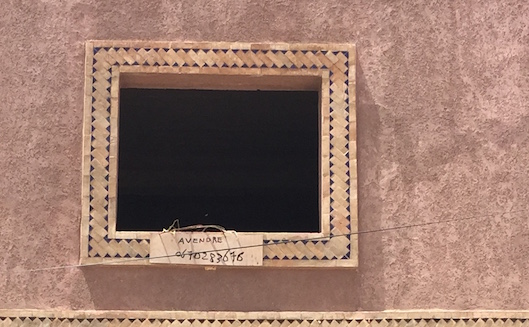 Samsar ads plastered around the city could be a thing of the past. (Image via Aline Mayard)

If you want to understand Morocco’s digital transformation, look no further than the real estate sector. Thanks to the educational efforts of a few early websites, followed by efforts of a handful of international real estate portals with deep pockets, samsars [intermediaries working under the table], promoters, and agencies are slowly moving their business online.While some small local websites have been around for years, like SeleKtimmo which launched in 2009, international websites, like Lamudi or Sarouty, started entering the market a couple of years ago. While Morocco already has an impressive number of real estate platforms, local and international entrepreneurs continue to be attracted by the potential this market represents, and more big international players are to enter the kingdom in the upcoming months. But many believe there isn’t enough room for all those players, so how will it shape up?

“In every country, there are five to six players when the market reaches maturity,” says SeleKtimmo’s cofounder Emmanuelle Boleau. Most of them are following different logics and looking for a different marketing.

In more mature markets, the largest platform is usually the country’s largest classified ads platform where you can sell, buy or lend anything, including apartments, with no intermediary. This is at play in Morocco. “We have the largest inventory, with over 240,000 properties,” says Larbi Alaoui Belrhiti, general manager of Morocco’s largest classified ad website Avito.ma’s. “More than 75 percent of ads are coming for individuals.”

A couple of large specialized platforms are usually also leading the sector. Some are focusing on the quality of the ads other on the number of ads. While Sarouty, the Moroccan edition of MENA’s biggest real estate portal Propertyfinder, and Rocket Internet’s Lamudionly work with agencies and focus on quality,

Mubawab, the 4-year-old real estate portal for the Arab world, is open to anyone. “We want the whole of Morocco’s ads to be published on Mubawab,” says Mubaweb’s cofounder KevinGormand. “I’d rather we have more ads of a lesser quality, but more choice.”

Finally, a couple of smaller local websites open to all, but mostly working with agencies are often part of this picture. Boleau is hoping SeleKtimmo, the website she cofounded in 2009, will be one of those. Webimmo, which was launched two years ago, the newcomer ChariKari, and many more have the same goal.

Success will depend on many factors including convincing agencies to post online, creating the right user experience to convince the web users to use their services, and monetizing fast. 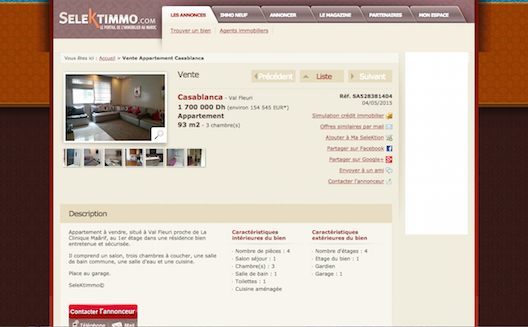 It takes time and money

A few years back, convincing agencies to post their ads online was a challenge in itself.

“We had to change mentalities,” recalls Gormand, who was among the first to enter the market. “This required patience and time. We had to meet [agencies], convince them, show them it was more interesting to work with us than to print billboards and flyers.”

Market education doesn’t stop there. “When we arrived, agencies didn’t want to post pictures, and prices,” Gormand continues. “In a few years, we managed to convince them to work on the quality of the ads.”

Now, “the message is easy for agencies to understand, but it takes time, especially in small cities,” says Clément Tesconi, country manager for Lamudi. The seven person sales team still meets agencies in person to convince them to join, and then follows up every month, a time and money-consuming strategy.

Unlike Boilau, SeleKtimmo opted to have only one sales representative working from her office on the phone, and focus on the quality of the relationship with the agencies rather than the quantity of the agencies signed up.

So which model is best? Is a seven-person team an unnecessary expense? Can a small team survive now that heavily funded websites have entered the market? 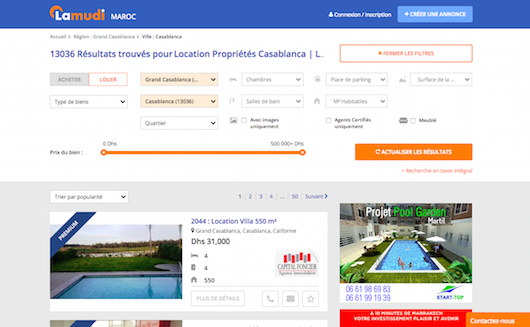 Are you looking for a mansion or cozy apartment? Lamudi offers advanced searches.

Agencies are not the only one who need convincing and educating, as the large chunk of their users are new to the internet. “Part of the market just connected to the internet; we’re in a training phase. We have to adapt to the ways users look for real estate,” says Lamudi’s Tesconi.

The Lamudi team, for instance, added a chat tool on the site.

“We go to the users and ask them directly if they need help,” he explains. “We also noticed that people didn’t want to leave their email address so we enabled them to leave their phone number instead.”

Convincing customers to go online is an expensive struggle. Many channel their funding into market education.

How long can those platforms survive with such heavy budgets? 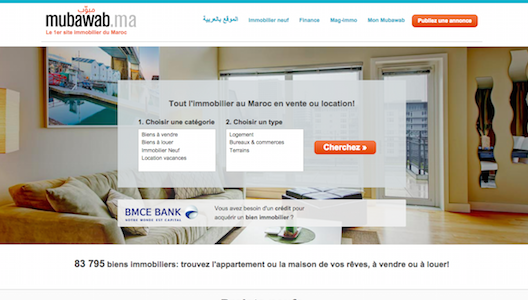 It’s all about the money

“[The new comers] will realize that it’s hard to monetize, and will have to ask themselves how much time they can go on without generating revenues,” Gormand notes.

Though each service has its own monetization model, which are best remains to be seen.

Avito.ma makes money by selling banners to advertisers and by allowing customers to create “stores”.  In the upcoming months, they will also offer paying services to individuals, such as sponsored ads. “Our goal is to generate profit in the upcoming years,” explains Belrhiti.

Lamudi offers a 360 degree approach. They charge agencies for the publication of ads, consulting services, creating custom websites, flyers, and more. In 2015, the company will break even due to scale economy on the international level, Tesconi says.

Mubawab and SeleKtimmo have already broken even by selling different levels of visibility on their websites.

“The first year was tough, but after a year we convinced the agencies, they renewed [their subscription] and many joined,” Boleau says. “After the second year, we were breaking even.” 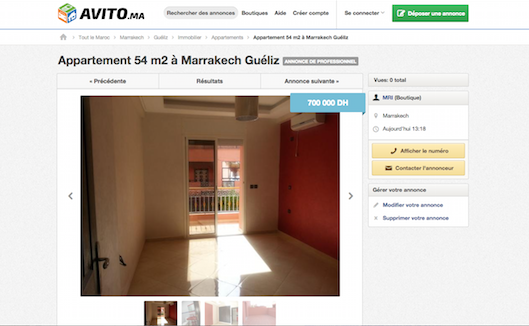 It doesn't get much simpler than an Avito ad.

“We have between three and four employees. We never spend much compared to the newcomers.”

Those small profitable players don’t necessarily aim to getting bigger, preferring to be profitable. “I’m not losing clients, I’m gaining new ones,” Boleau says. “This is an indication of success.”

The other ones, which have huge costs due to their large team and advertising budget will need to generate huge revenue streams to make up for their costs. But are the Moroccan residents willing to spend enough money to create revenue for all of them?

“There can’t be that many website in the end,” Gormand says. “I don’t think there will be mergers/acquisitions, the market is not ready for that,” he adds, pointing out that no website has the budget for that. “I think some websites will have to close.”

While most managers Wamda spoke with seemed optimistic about their websites, it is difficult to get a clear indication about the health of the real estate sector. In such a competitive sector, it is hard to know which numbers are actually accurate. And the numbers of ads, or pageviews hardly reflects how many transactions are done, or how profitable the platforms are. If Gormand’s prediction proves correct, we’ll know soon enough who is not doing as well as they seem to be.