Tech investment firm Beco Capital have concluded that over the last 12 months the VC investment activity within the Middle East and North Africa has grown.

With thanks to a deeper startup ecosystem across the region, government and private initiatives are taking off with increased attention from international VCs, as well as local VCs.

Using the format of the periodic table of elements (a table of chemical elements arranged in order of atomic number) Beco Capital shows that there are a total of 109 private players in the VC sector of the MENA. 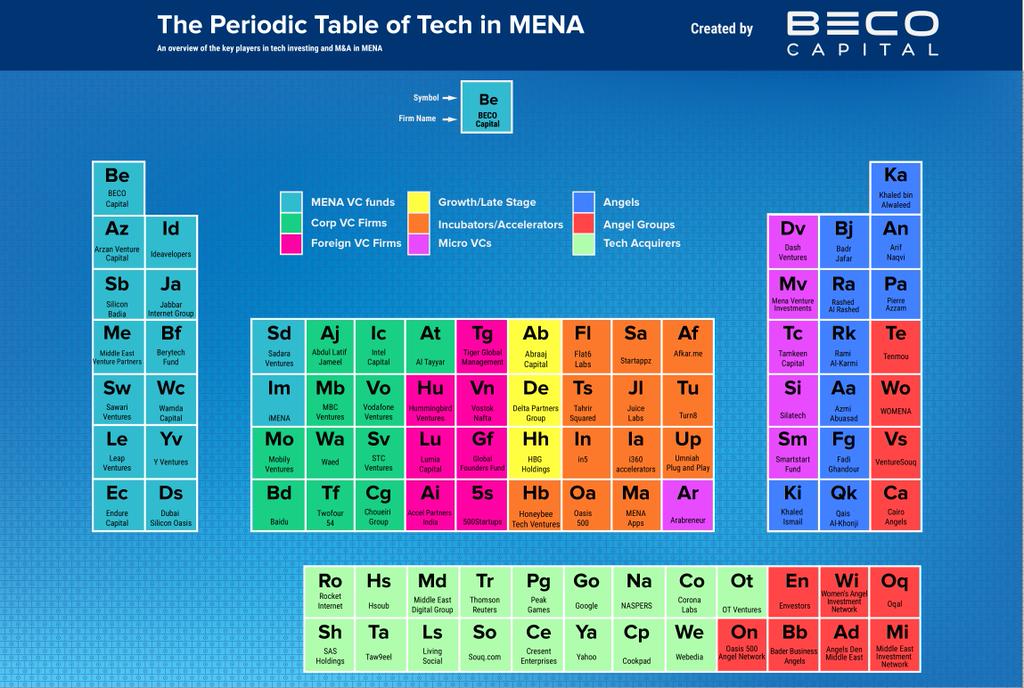 There are 19 regional, and 7 international VCs operating in the region, plus 3 focused on growth and later stage investment.

There are 12 regional corporations with VC arms, 12 incubators/accelerators and 11 angel groups.

The ‘big four’ as Beco labels them, are the types of VCs operating in the region - MENA-based, foreign, micro and corporate.

In total these VCs have collectively raised $250 million over the last three years, and of that $150 million is remaining. Of this money Beco has raised about a quarter of the funds committed so far this year.

Beco, a firm providing early stage growth capital for the tech sector, have previously invested in Careem, Propertyfinder and Bayzat. On the release of their ‘periodic table’ they have said that not all of their remaining funds will go towards new investments.

Thought the table may look full and colorful Beco’s CEO Dany Farha said that there is still a way to go when it comes to growing funding in the region.

He believes that the the allocation of sovereign wealth funds, family offices, and institutional investors to VC firms would be a step in the right direction.

He said: “This will accelerate the creation of our ecosystem, build local tech success stories, ensure that MENA participates in the tech revolution, contribute to a better region and therefore a more stable and prosperous region and, ultimately, provide investors with outsized returns in the process."

The market is still nascent, but there is a lot of excitement and activity around it. Once it takes off, it will soar. We will be the next big international tech boom story, following in the footsteps of India".

As for the international VCs paying interest in the region, there has been a little incline, as previously covered on Wamda, and Farha expects that they will be coming in their droves in about fives years time.